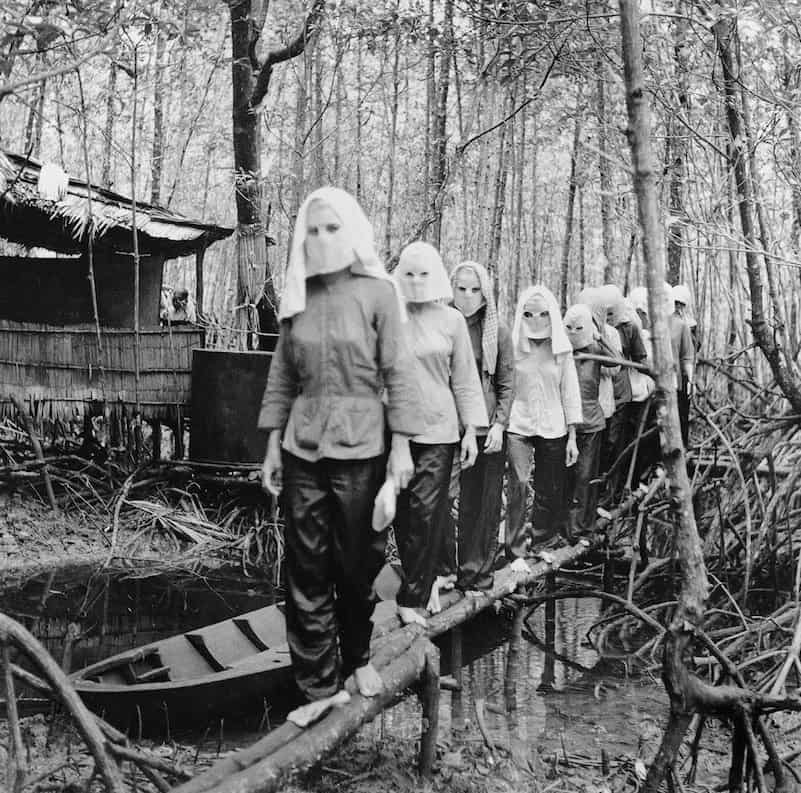 Unseen images of the war from the winning side

For much of the world, the visual history of the Vietnam War has been defined by a handful of iconic photographs: Eddie Adams’ image of a Viet Cong fighter being executed, Nick Ut’s picture of nine-year-old Kim Phúc fleeing a napalm strike, Malcolm Browne’s photo of Thích Quang Duc self-immolating in a Saigon intersection.

Many famous images of the war were taken by Western photographers and news agencies, working alongside American or South Vietnamese troops.

But the North Vietnamese and Viet Cong had hundreds of photographers of their own, who documented every facet of the war under the most dangerous conditions.

Almost all were self-taught, and worked for the Vietnam News Agency, the National Liberation Front, the North Vietnamese Army or various newspapers. Many sent in their film anonymously or under a nom de guerre, viewing themselves as a humble part of a larger struggle.

“We had to be extremely careful because we had limited amounts of film that had been distributed to us by our paper. For us, one photo was like a bullet.” 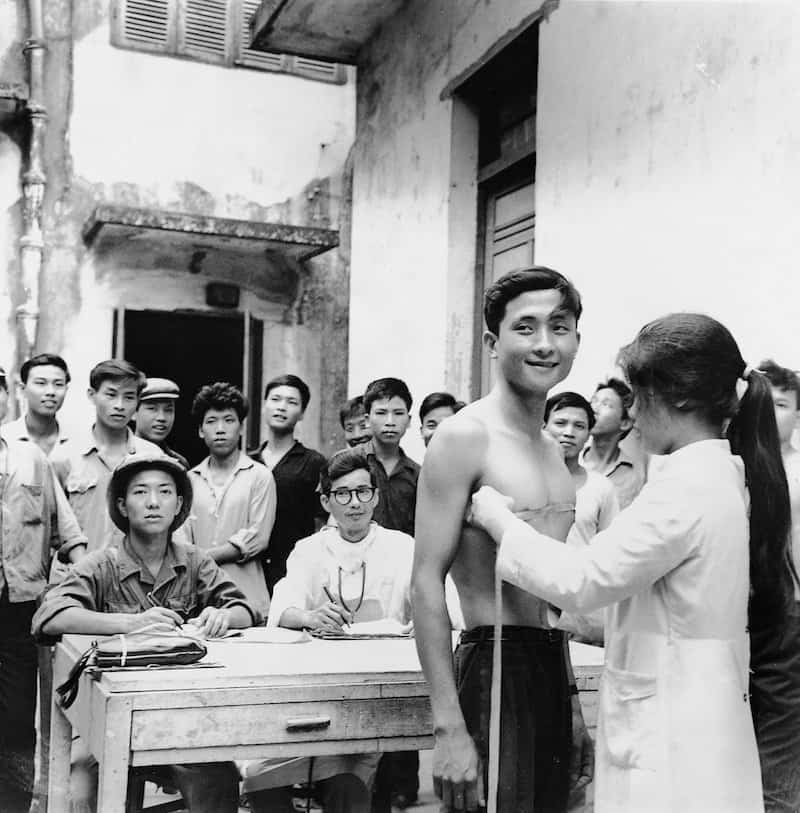 July 1967
New recruits undergo physical examinations in Haiphong. The North’s volunteer system was transformed into a mandatory system in 1973, when all able-bodied males were drafted. From a corps of around 35,000 men in 1950, the NVA grew to over half a million men by the mid-’70s, a force the U.S. military conceded was one of the finest in the world.
IMAGE: BAO HANH/ANOTHER VIETNAM/NATIONAL GEOGRAPHIC BOOKS

Equipment and supplies were precious. Processing chemicals were mixed in tea saucers with stream water, and exposed film was developed under the stars. One photographer, Tram Am, only had a single roll of film, 70 frames, for the duration of the war.

Faced with the constant threat of death by bombing, gunfire or the environment, these photographers documented combat, civilian life, troops on the Ho Chi Minh Trail, resistance movements in the Mekong Delta, and the bloody impact of the war on the innocent.

Some were photographing to document history, while others strove to use their cameras as weapons in the propaganda war. Shooting clandestinely in the South, Vo Anh Khanh could never get his photos to Hanoi, but exhibited them in the mangrove swamps of the Mekong Delta to inspire resistance.

Many of these photographs have rarely been seen in Vietnam, let alone in the rest of the world. In the early 1990s, photojournalists Tim Page and Doug Niven started tracking down surviving photographers. One had a dusty bag of never-printed negatives, and another had his stashed under the bathroom sink. Vo Anh Khanh still kept his pristine negatives in a U.S. ammunition case, with a bed of rice as a desiccant.

One hundred eighty of these unseen photos and the stories of the courageous men who made them are collected in the book Another Vietnam: Pictures of the War from the Other Side. 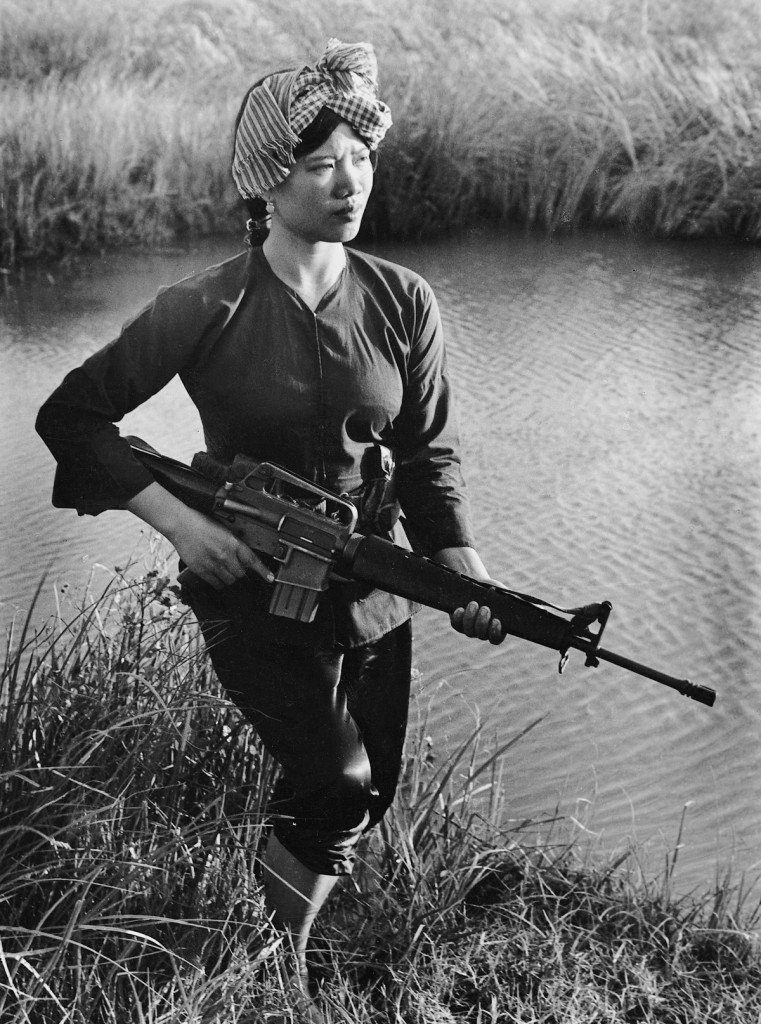 1973 A Viet Cong guerrilla stands guard in the Mekong Delta. “You could find women like her almost everywhere during the war,” said the photographer. “She was only 24 years old but had been widowed twice. Both her husbands were soldiers. I saw her as the embodiment of the ideal guerrilla woman, who’d made great sacrifices for her country.” IMAGE: LE MINH TRUONG/ANOTHER VIETNAM/NATIONAL GEOGRAPHIC BOOKS 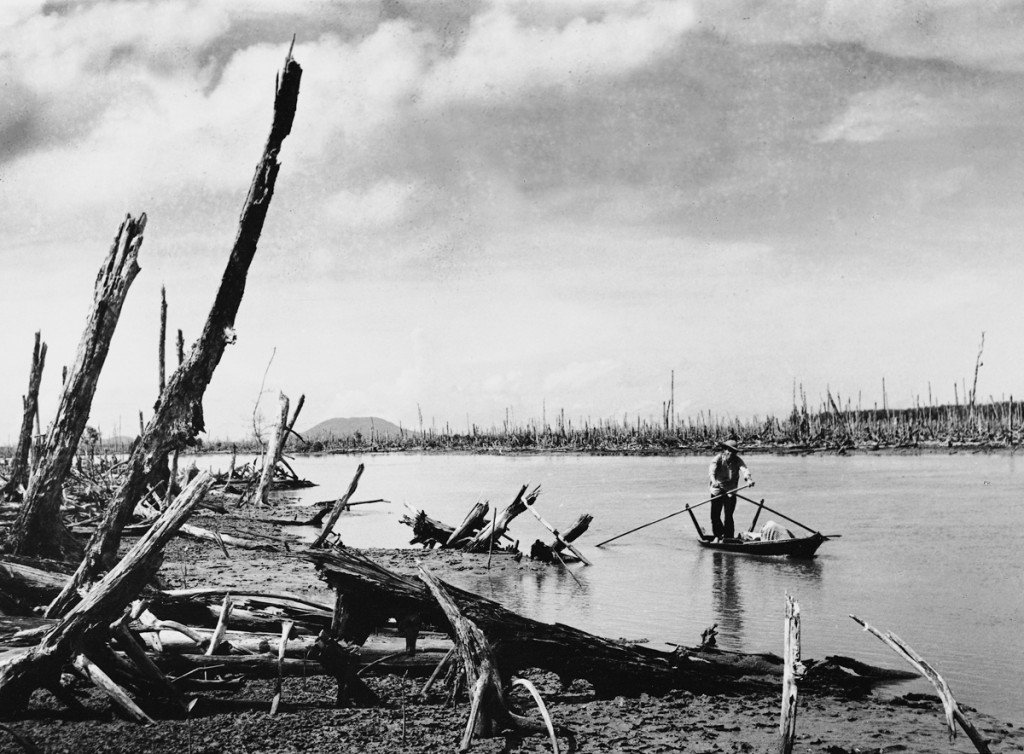 1970
A guerrilla in the Mekong Delta paddles through a mangrove forest defoliated by Agent Orange. The Americans denuded the landscape with chemicals to deny cover to the Viet Cong. The photographer was sickened by what he saw, since the Vietnamese regard mangrove forests as bountiful areas for agriculture and fishing.
IMAGE: LE MINH TRUONG/ANOTHER VIETNAM/NATIONAL GEOGRAPHIC BOOKS

“The vast dark forest was my giant darkroom. In the morning I’d rinse the prints in a stream and then hang them from trees to dry. In the afternoon I’d cut them to size and do the captions. I’d wrap the prints and negatives in paper and put them in a plastic bag, which I kept close to my body. That way the photos would stay dry and could be easily found if I got killed.” 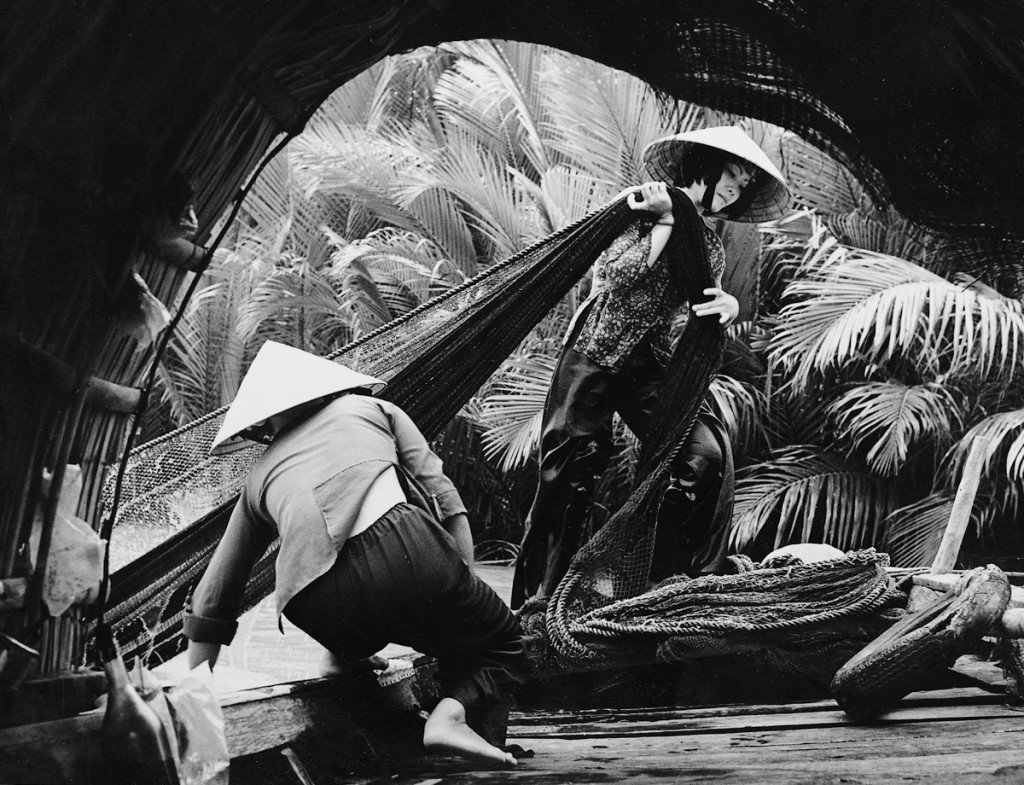 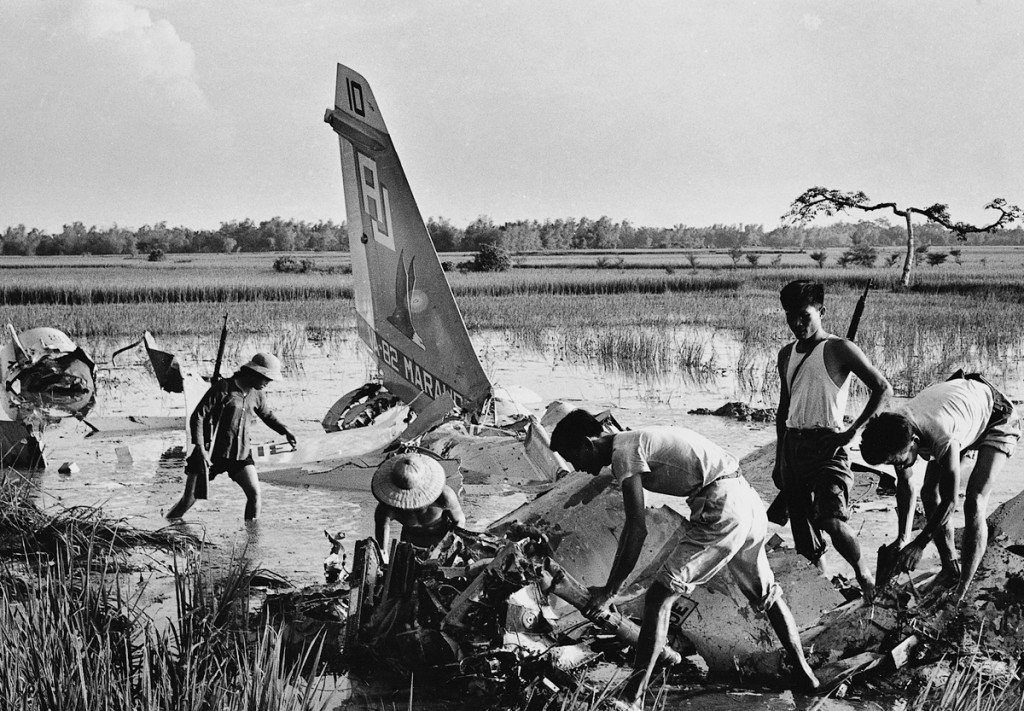 June 1972
Militia members sort through the debris of an American plane downed by small-arms fire in the Hanoi suburbs. The pilot had been flying at treetop level to avoid radar detection, but such low-flying planes were more vulnerable to small arms. U.S. planes targeted Hanoi industrial sites, but most industries were relocated to the countryside.
IMAGE: DOAN CONG TINH/ANOTHER VIETNAM/NATIONAL GEOGRAPHIC BOOKS
“During the American bombing, I took my most memorable photos. I actually shot a photo of Senator John McCain’s plane falling out of the sky over Hanoi. I was proud of that photo and wanted it to convey a message of patriotism in the face of foreign invasion.”
-VU BA 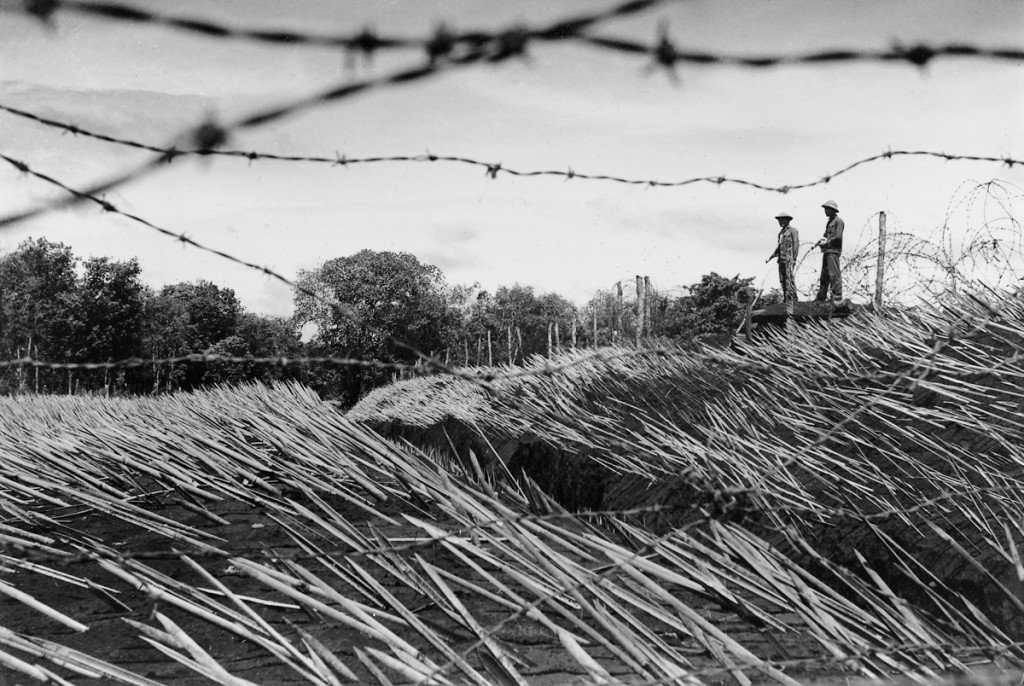 1972 Guerillas guard an outpost on the Vietnam-Cambodia border protected by poisoned bamboo punji stakes. Sharpened then hardened with fire, punji stakes were often hidden where enemy soldiers would step on them. Such booby traps were meant to wound, not kill, because wounded soldiers slowed down their unit, and medevacs gave away its position. IMAGE: LE MINH TRUONG/ANOTHER VIETNAM/NATIONAL GEOGRAPHIC BOOKS 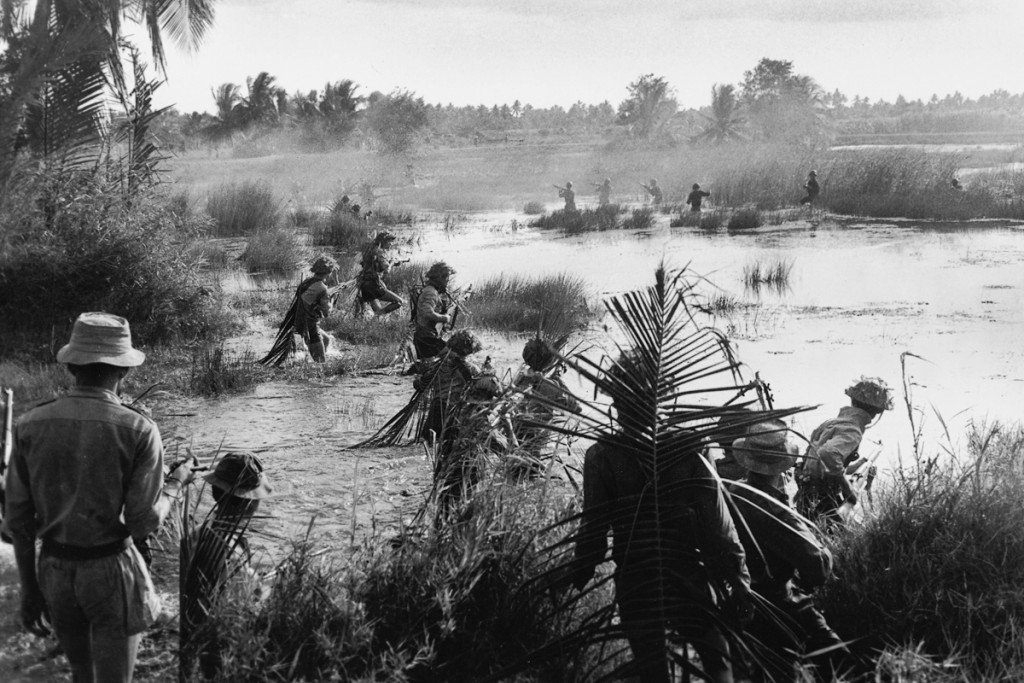 Date unknown
Viet Cong meet the enemy face-to-face, most likely in the Mekong Delta or Plain of Reeds. This rare image shows both sides in combat, ARVN soldiers at the top and Viet Cong in the foreground. The VC have flanked the enemy at left and right, which likely meant the ARVN unit was wiped out.
IMAGE: HOANG MAI/ANOTHER VIETNAM/NATIONAL GEOGRAPHIC BOOKS 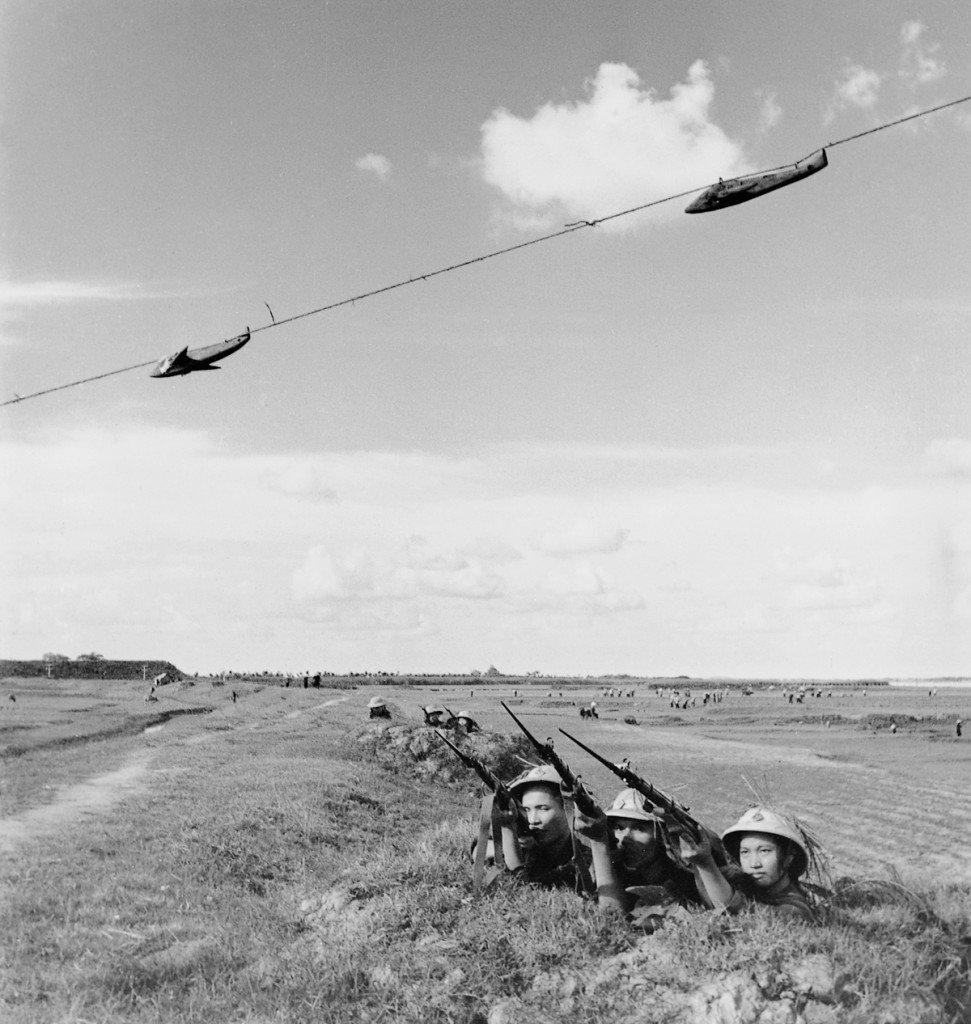 September 1965
Using overhead targets, a militia company practices firing ahead of speeding aircraft in Thanh Tri. Even using antiquated WWII rifles such as these, the Vietnamese were able to cripple or down many U.S. aircraft. This militia group, Company #6 of the Yen My Commune, earned the title of “Excellent Militia” three years in a row.
IMAGE: MINH DAO/ANOTHER VIETNAM/NATIONAL GEOGRAPHIC BOOKS
“We even came up with a new form of flash photography to illuminate our fighters and villagers who were living in bomb shelters and tunnels. We emptied gunpowder from rifle cartridges onto a small handheld device and then lit the gunpowder with a match. The burning powder provided all the light we needed.“
-MAI NAM 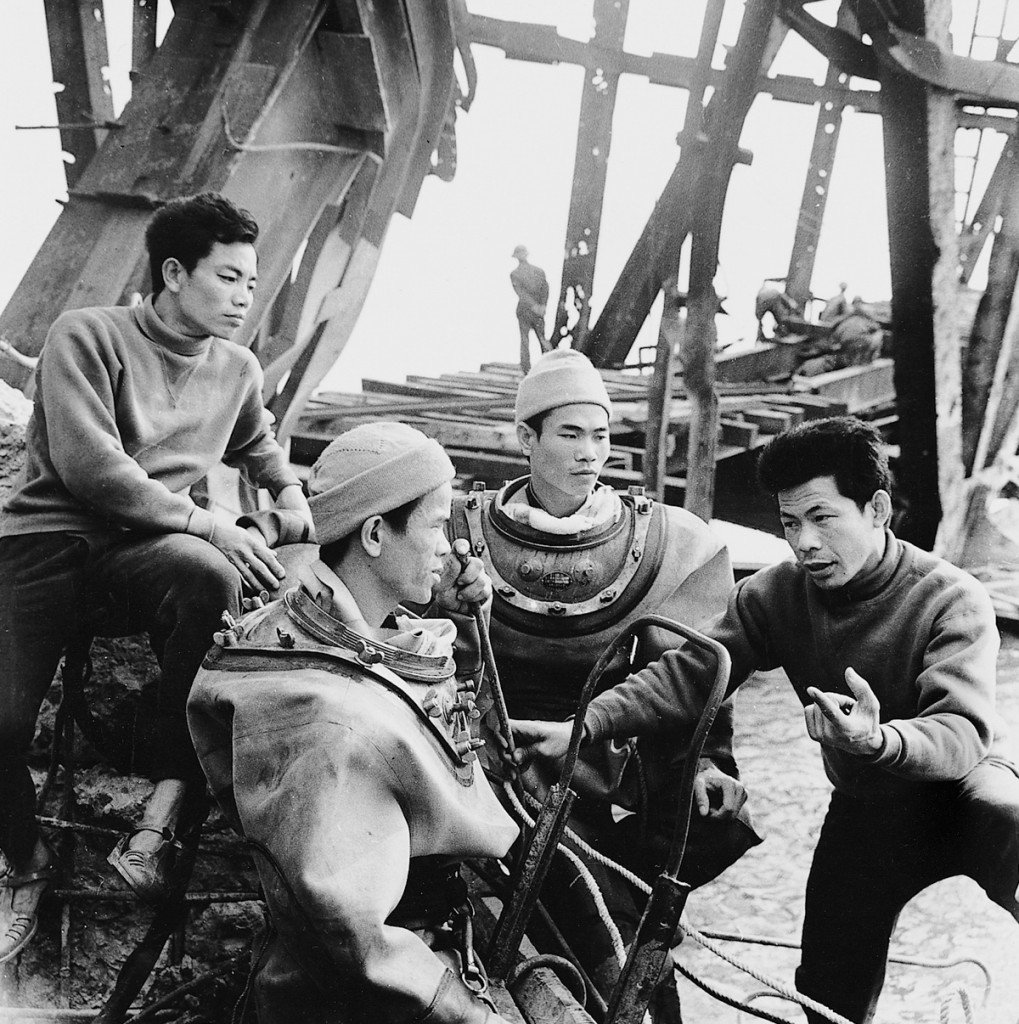 1973
Construction workers discuss repairs of the bombed out Ham Rong Bridge, in central North Vietnam. The only route across the Ma River for heavy trucks and machinery, the bridge was heavily defended, and several U.S. planes were shot down nearby. An American MIA search team found pilot remains there.
IMAGE: UNKNOWN PHOTOGRAPHER/ANOTHER VIETNAM/NATIONAL GEOGRAPHIC BOOKS 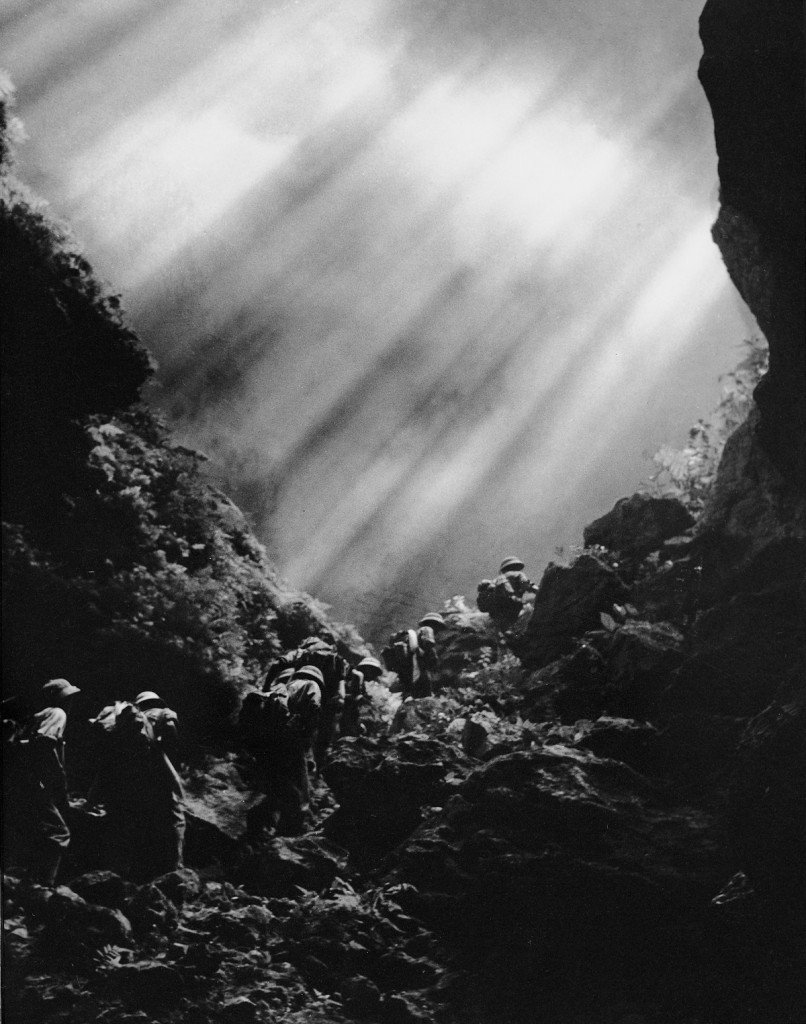 1966
Troops walk the Ho Chi Minh Trail in the Truong Son Mountains, which form the 750-mile-long spine of Vietnam, stretching along much of the country’s western border. To the soldiers of the North, the Ho Chi Minh Trail was known as the Truong Son Road.
IMAGE: LE MINH TRUONG/ANOTHER VIETNAM/NATIONAL GEOGRAPHIC BOOKS
“I was certainly not taking photos for their aesthetic appeal. I was not thinking of beauty. Burned and shattered homes and dead bodies are not pretty. Any pretense of aesthetics was replaced by our purpose of recording the war.”
-DUONG THANH PHONG 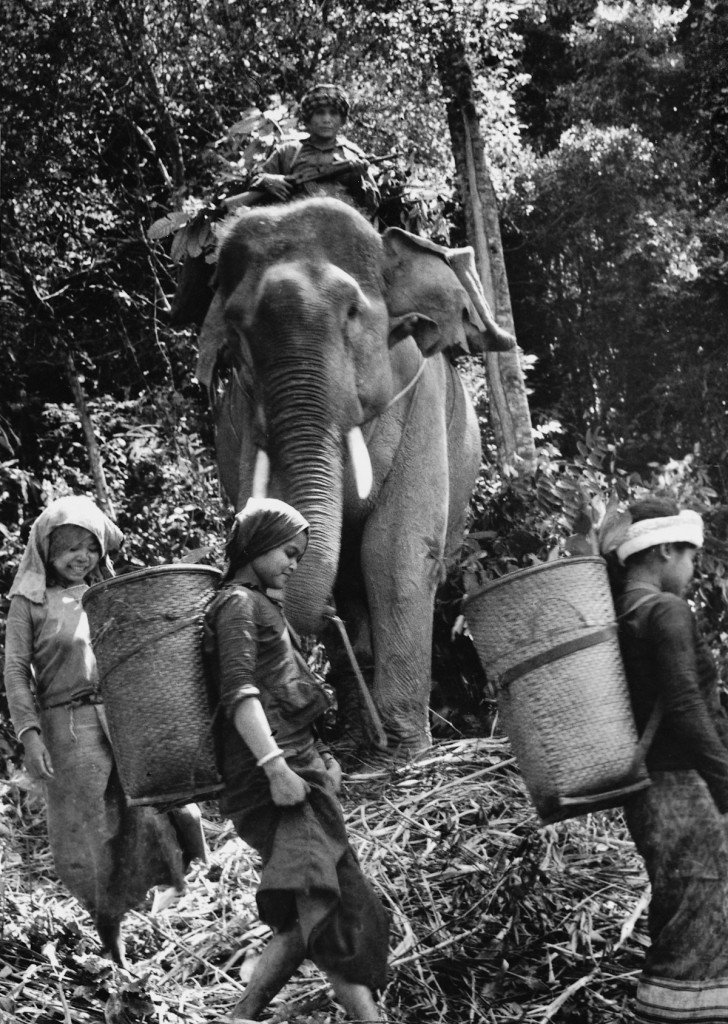 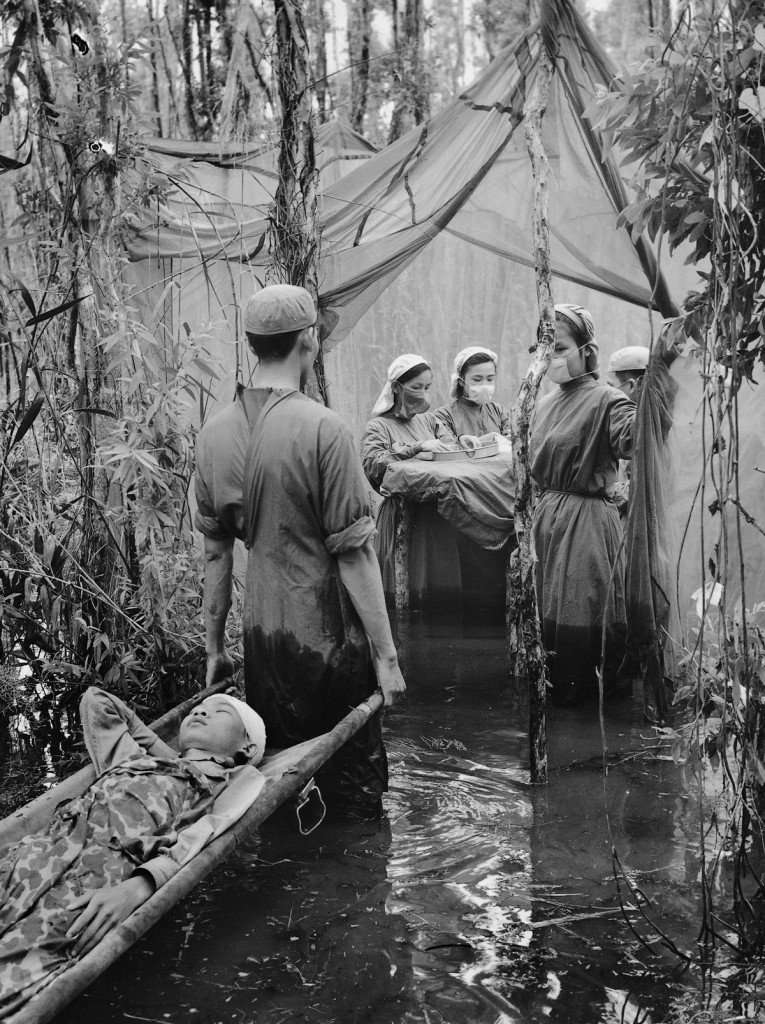 Sept. 15, 1970
A victim of American bombing, ethnic Cambodian guerrilla Danh Son Huol is carried to an improvised operating room in a mangrove swamp on the Ca Mau Peninsula. This scene was an actual medical situation, not a publicity setup. The photographer, however, considered the image unexceptional and never printed it.
IMAGE: VO ANH KHANH/ANOTHER VIETNAM/NATIONAL GEOGRAPHIC BOOKS
“We were more alive in wartime, working in the border between life and death.”
-NGUYEN DINH UU 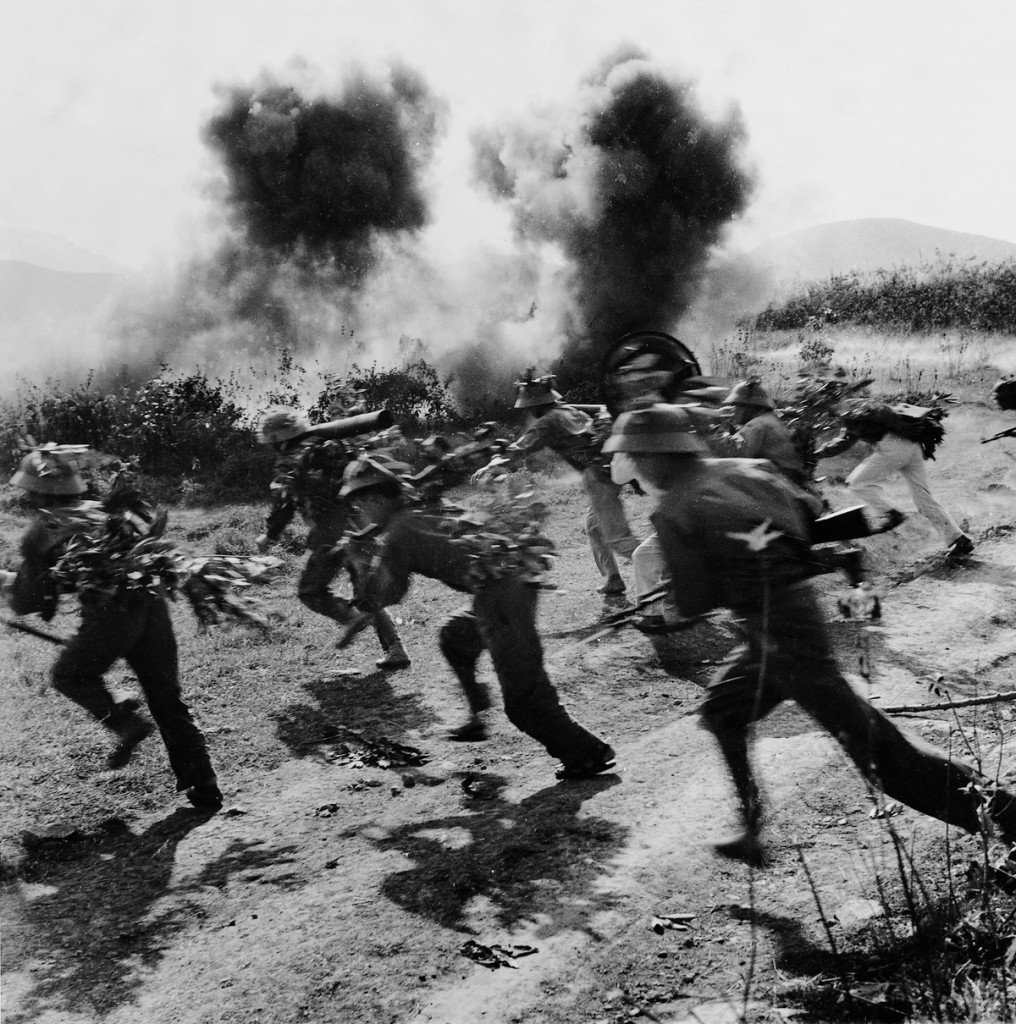 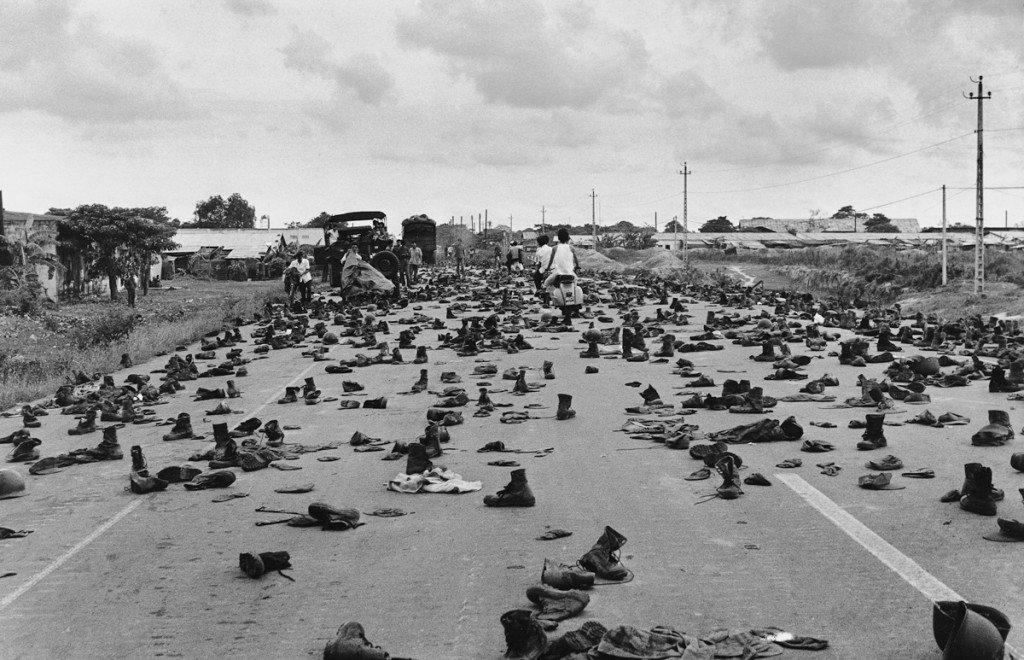 April 30, 1975
Combat boots litter the road on the outskirts of Saigon, abandoned by ARVN soldiers who shed their uniforms to hide their status. “I’ll never forget the shoes and the loud ‘thump, thump, thump’ sound as we drove over them,” recalled the photographer. “Decades of war were over and we finally had peace.”
IMAGE: DUONG THANH PHONG/ANOTHER VIETNAM/NATIONAL GEOGRAPHIC BOOKS
“The survivors are called witnesses of history. I don’t know if we ourselves are witnesses, but our photographs certainly are. They paid the price with blood.“
-DOAN CONG TINH 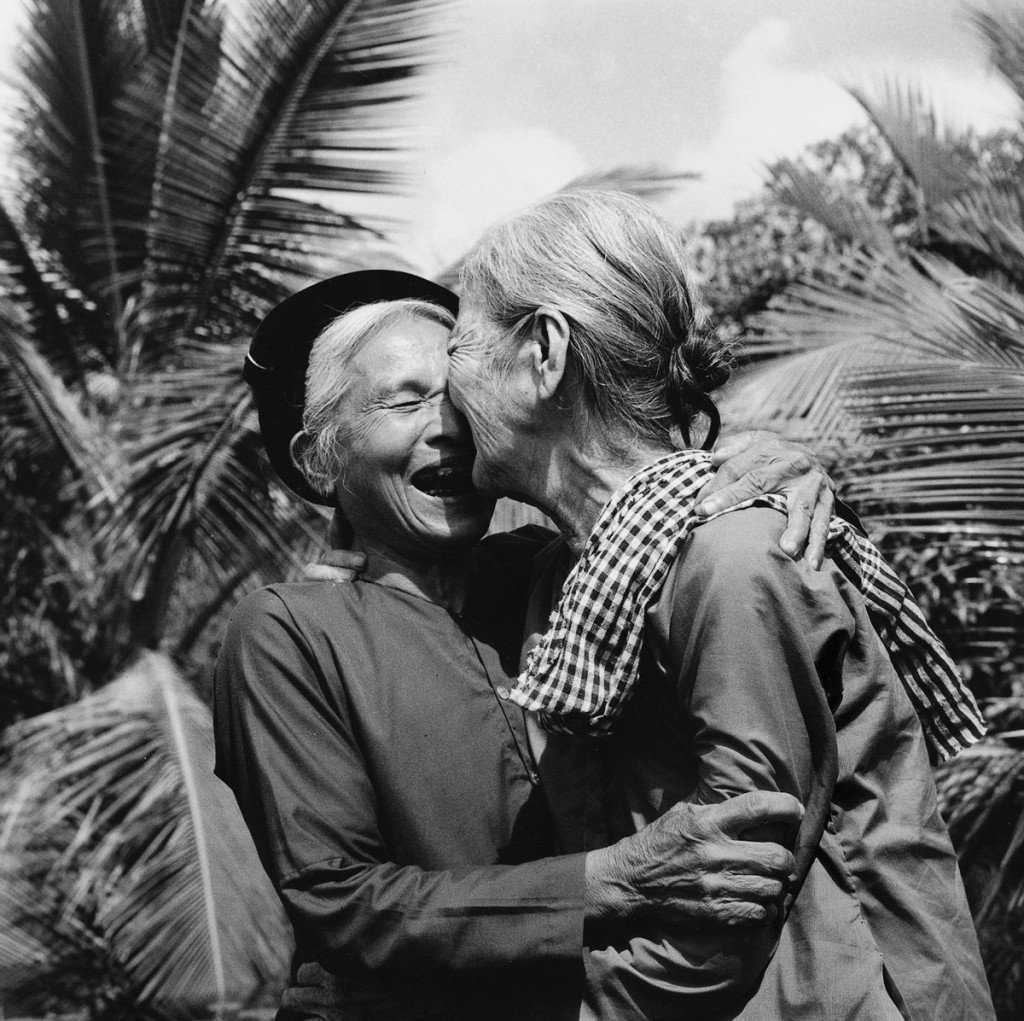