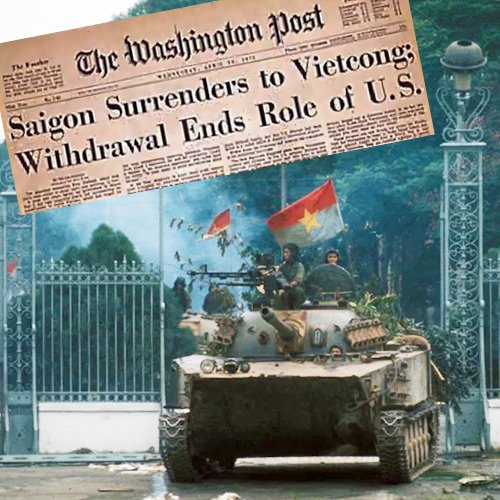 January 6 In a disastrous loss for the South Vietnamese, the PAVN  take Phước Long city and the surrounding province. The attack produces no retaliation from the United States.

January 8 The DRV escalates its strategy in South.

February and March The PAVN attack key cities in the Central Highlands, During the disorganized withdrawal of the ARVN, panic ensues and there is a collapse in the Region II area.

March 1 A powerful PAVN offensive is unleashed in the Central Highlands of South Vietnam. The resulting South Vietnamese retreat is chaotic and costly, with nearly 60,000 troops dead or missing.

March 30 Da Nang falls to the PAVN and NLF.

April Five weeks into its campaign, the PAVN and NLF  have made stunning gains. Twelve provinces and more than eight million people are under its control. The South Vietnamese Army has lost its best units, over a third of its men, and almost half its weapons.

The Lon Nol government in Cambodia collapses and the Khmer Rouge under Pol Pot begin a reign of terror.

April 9-26 April 3–26, 1975. By the final American flight out of South Vietnam, over 3,300 infants and children have been evacuated, although the actual number is unclear. Along with Operation New Life, over 110,000 refugees are evacuated from South Vietnam by the end of the Vietnam War. Thousands of children are airlifted from Vietnam and adopted by families around the world.

April 8-21 Battle of Xuân Lộc: The ARVN commits almost all their remaining mobile forces, especially the 18h Division under Brigadier Lê Minh Đảo, to the defense of the strategic crossroads town of Xuân Lộc, hoping to stall the PAVN advance. The battle ends when the town of Xuân Lộc is captured by the PAVN 4th Army Corps led by Major General  Hoàng Cầm. This was the ARVN III Corps’ last defensive line east of Saigon.

April 20 Thiệu resigns and goes to Taiwan. The government is turned over to neutralist Dương Văn Minh.

April 29 U. S. Marines and Air Force helicopters, flying from carriers off-shore, begin a massive airlift. In 18 hours, over 1,000 American civilians and almost 7,000 South Vietnamese refugees are flown out of Saigon.

April 30 Dương Văn Minh surrenders to Colonel Bùi Tín of the PAVN. The war is over and Vietnam will soon be reunited. At 4:03 a.m., two U.S. Marines are killed in a rocket attack at Saigon’s Tan Son Nhut airport. They are the last Americans to die in the war. At dawn, the last Marines of the force guarding the U.S. embassy lift off. and U.S. personnel leave in panic in an emergency helicopter airlift. Only hours later, the embassy is ransacked, and DRV tanks role into Saigon, ending the war. In 15 years, nearly a million PAVN and NLF troops and a quarter of a million South Vietnamese soldiers have died. Hundreds of thousands of civilians had been killed.

May The PAVN and local forces from the NLF establish control in South Vietnam. Saigon is placed under the control of a military management committee headed by the NLF.

The newly formed Democratic Kampuchea begins attacking Vietnam, beginning with an attack on the Vietnamese island of Phú Quốc .

May 12-15 The Mayaguez ‘incident’ takes place between Kampuchea (formerly Cambodia) and the U.S., less than a month after the Khmer Rouge take control of the capital Phnom Penh ousting the U.S.-backed Khmer Republic. After the Khmer Rouge seizes the U.S. merchant vessel SS Mayaguez in a disputed maritime area, the U.S. mounts a hastily-prepared rescue operation.US Marines recapture the ship and attack the island of Koh Tang where it was believed that the crew were being held as hostages. Encountering stronger than expected defenses on Koh Tang, three USAF helicopters are destroyed during the initial assault and the Marines fight a desperate day-long battle with the Khmer Rouge before being evacuated. The Mayaguez‘s crew were released unharmed by the Khmer Rouge shortly after the attack on Koh Tang began. It is considered the last battle of the war and the names of the Americans killed, including three Marines left behind on Koh Tang after the battle and subsequently executed by the Khmer Rouge, are the last names on the Vietnam Veterans Memorial.

The  newly united  nation faced profound economic challenges compounded by severe weather in the late 1970s.  In the North, 29 of the 30 provincial capitals had sustained heavy bombing damage, one-third of them almost utterly destroyed. Estimates are that the U.S. Air Command alone created 26 million craters with its bombing of the South. Chemical herbicides and napalm also had been sprayed over one-seventh of South Vietnam’s total land mass causing widespread deforestation. Seventy per cent of the South’s coconut groves and 60% of its rubber plantations were destroyed, together with 110,00 hectares of forest and 150,000 hectares of mangroves, along with enough crops to feed 2 million people. 43% of the south’s plantations and orchards were destroyed, and 44% of the forest wealth. The term ‘ecocide’ is coined in an effort to describe the scale of environmental destruction.  In southern Vietnam, the local economy had been propped up with US aid and investment. Consequently, there had been little in the way of development, indigenous investment, new industries or infrastructure. In the post-war South, at least three million civilians were unemployed, while several million took to the roads in search of food. There were also half a million prostitutes, who during the war had made a living servicing US and ARVN soldiers

Below is an abbreviated list of important events since the end of the war in 1975.

1975-1995 While there are not mass executions, despite Nixon’s dire predictions, tens of thousands of Vietnamese—estimates range from 50 to 200,000– are rounded up in brutal Re-education camps to ““learn about the ways of the new government.”

More than 3 million people—sometimes referred to as ‘boat people”–flee from Southeast Asia in this period, peaking between 1978 and 1980.  These include refugees from Vietnam—including Sino-Vietnamese (Hoa), Hmong and former supporters of the South Vietnamese government—as well as from Cambodia and Laos.

July 2, 1976 Vietnam is reunified as the Socialist Republic of Vietnam iss officially proclaimed with its capital in Hanoi.

December 25 1978 Vietnam launches an invasion of Kampuchea and subsequently occupies the country and removes the genocidal Khmer Rouge from power.  The war began with isolated clashes along the land and maritime boundaries of Vietnam and Kampuchea between 1975 and 1977, occasionally involving division -sized military formations.  The precipitating event for the invasion was the Ba Chúc massacre of over 3,000 Vietnamese civilians by the Khmer Rouge in April, 1978.  The US and the People’s Republic of China collude to isolate Vietnam while continuing to support the Khmer Rouge government in the United Nations.

February 17, 1979, The Chinese People’s Liberation Army (PLA) force of about 200,000 troops supported by 200 tanks invade northern Vietnam.  According to Vietnam, since January 1979 Chinese forces had performed numerous reconnaissance activities across the border and made 230 violations into Vietnamese land.  The Chinese proclaimed goal was to ‘punish’ Vietnam for its overthrow of the Chinese supported Khmer Rouge.  The Chinese PLA withdrew in March.

November 13, 1982 The Vietnam Veterans Memorial—designed by Maya Lin– is unveiled in Washington DC.

May 7, 1984 A $180 million settlement is announced against 7 chemical companies who had produced Agent Orange, etc. on behalf of US veterans who claimed serious health problems due to exposure.  No Vietnamese—the targets of the carcinogenic herbicides—have received any remuneration from chemical companies or the US government.

December 1986 The 6th National Congress of the Communist Party of Vietnam calls for Đổi Mới (Renovation) or the creation of a Socialist-Oriented Market Economy.

July 11, 1995 The US establishes diplomatic relations with Vietnam.