I’m writing this letter to you from the perspective of an Iraq War Veteran, turned pacifist. The process of the domineering Social/Political castes re-writing and sanitizing history to fit the narrative of American exceptionalism is by no means an anomaly. Facing this task alone can feel daunting, but it is necessary for us seize the narrative of our experience, of our role within a larger cultural narrative, to seek truth, and possibly forgiveness. Through this pursuit, we shall continue the tradition of dissent in the face of manufactured lies. After all, we are the ones that lived it.

As Veterans, especially, we must remain highly conscious of our participation inside of militaristic conflict, therefore using them to direct our vision towards a holistic goal of peace. Many of us leave the Service feeling morally destitute. We ask ourselves, “How can I make use of my time now? What positive contribution can I possibly make after all THAT?” A search for truth and compassion, with the help of social support, can steer us towards a clearer path. Making the decision to take responsibility to correct the errors of the past is empowering. It allows us to redefine our self-narrative that may been whitewashed during our time in the military. And most importantly of all, we can honor the victims of our militaristic conflicts by advocating alongside them, or on their behalf. As participants and benefactors of foreign conflicts, we owe it to them to educate and engage as many Americans as possible on the follies of American militarism and exploitive capitalism.

Reader, I invite you to speak the truth every day. Please join me in self-educating, and unpacking our toxic mindsets that contribute to these global problems. The Vietnam War Veterans understood what dissent was. Let’s bring it back with the flavor of the 21st century.


Etched in my heart

Here I hold still in silence

my connection to you,

to the wound inside of me

that came from the war,

that has never healed.

I see myself reflected in your names,

to its vanishing point rising cold on the hill,

I sense myself in a church

or, even more, in a graveyard.

I can’t help but think about death –

There should be a good reason for it

but how can it be good

when the reason is war?

Where we do it on purpose because

we think we have an enemy?

We think we’re protecting our loved ones?

We pledge allegiance to a flag?

We are only following orders?

I wish we hadn’t gone there,

that we all knew better,

since there is no such thing as just war

it only draws us down into more war

Ever the wars go on with no mercy.

to destroy lives and futures and Earth itself.

Because, why? We are the chosen people?

I am moved by your absence, brothers and sisters,

yet feel the weight of your presence

in the calling that arises deep within me:

Listen, we must end all war

before it puts an end to us.

Saturday Diary: Remembering one of ‘our boys,’ lost in Vietnam 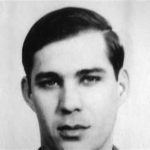 He was from Alabama, and his first name was Cleveland.

I learned that from his mother, with whom I exchanged letters after I got the nickel-plated bracelet etched with the name of her son, C. Scott Harris. Under his name was the date, 2-29-68. That was the day that he and his pilot, Crosley J. Fitton Jr., were shot down in an F-105 over Hanoi.

I was 13 when I saw an ad for bracelets etched with names of prisoners of war and Americans missing in action in Vietnam, Laos and Cambodia. Voices in Vital America, a California student group, started the bracelet campaign in 1970.

It has been described as a conservative counterbalance to anti-war protests of the day, but I wore my bracelet as an anti-war statement. It represented someone in the war I cared about, and when you care about someone in combat, you want peace yesterday.

At the end of June, this year, I finally made it to the Vietnam Veterans’ Memorial Wall in Washington.

As I walked across the Mall to get there, I remembered Scott’s face from the photo his mother had sent — dark hair, long lashes, mouth curved up at the corners. The photo sat propped on its cardboard kickstand on my desk throughout high school.

There were other images in my head too — from the 6 o’clock news of long ago, of helicopters, swaying trees and young men hunched, running, carrying stretchers. From those news accounts, the words Pleiku, Da Nang, Nha Trang and Mekong Delta are forever etched on my memory.

Every time President Lyndon B. Johnson appeared on TV, my father would shout, “Get out of this God-damned war!”

A World War II veteran, Daddy was the most vociferous anti-war person I knew back then. He said we have no business in Vietnam; our boys shouldn’t have to be there. He said “our boys” as if they were his sons. When I saw soldiers running with wounded buddies on TV, I saw people’s older brothers.

On a comments page associated with the memorial wall online, I picked out this line: “Many of us are tormented by the waste of it all.”

Cleveland Scott Harris was born on May 11, 1941. He was a captain in the Air Force Reserves, promoted to major while he was missing, according to his younger brother Eddy. Their mother was Clara Alice. Her maiden name was Scott. Their daddy was Cleveland. They lived on 27th Street West in Birmingham.

The family never heard another word about or from Scott after he sailed to Earth attached to a parachute on that Leap Day of 1968, except, Eddy said, a military directive “not to talk about it.” The military declared him dead seven years later. The family never knew how many days of those years he was alive.

His remains were sent to Birmingham in 1985.

“I always wondered why no one ever reported seeing him,” Eddy said. “We called the state forensics to see if they could tell when he died and they said no. They probably could today.”

At the Wall, dozens of people milled about. One man stood with his head bowed, his fingers dug into a letter of someone’s name. Had I felt like a journalist, I might have asked for his story. But I felt like a 13-year-old.

The Wall is roughly the length of an outfield wall in baseball, with rows upon rows of names upon names. There are 58,256 names. Eight are those of women.

I had arrived thinking it would be like cheating to go straight to one name and be done with it, but it didn’t take long to become emotionally awash in names. Near the cleave in the middle of the Wall, people huddled around a go-to man in a khaki hat.

He directed me to panel 42E, row 6. I moved quickly, passing thousands of names of people who had been dear to thousands of others.

I found the panel and scanned down … and there he was.

Cleveland S Harris. I touched his name and bowed my head. An older woman set a clump of wild daisies gently at the base of the Wall 20 feet away. She paused and then patted them before straightening herself.

I felt a little embarrassed to be weeping so copiously. I wondered how much harder I would be crying if Scott had been my brother.