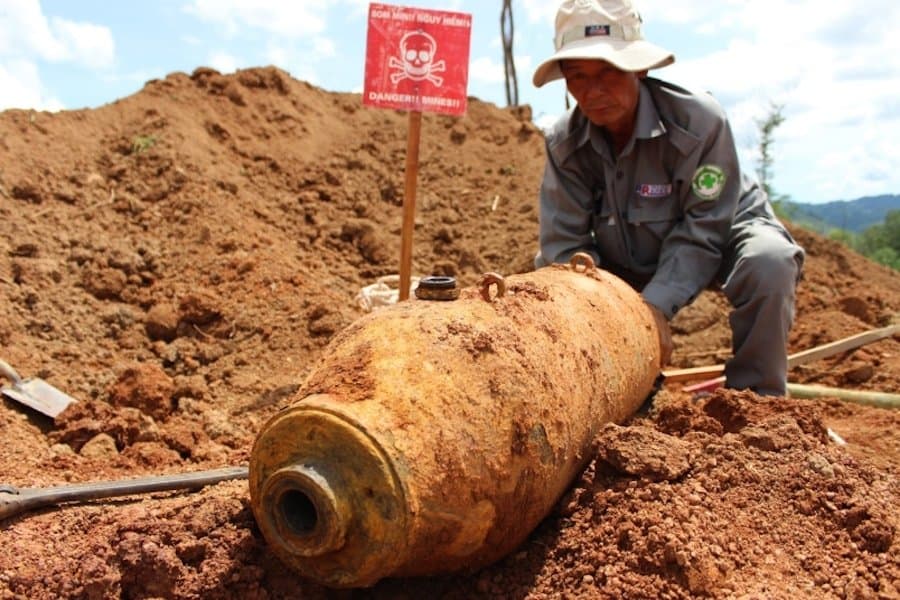 This article originally appeared at StarsandStripes.com.

Construction workers were shocked to discover the AN-M57 aerial bomb, because the building zone in Dakrong District, Quang Tri province, had supposedly been cleared of all ordnance left from the Vietnam War of the 1960s and early 1970s.

The U.S. dropped millions of tons of bombs on the country during that decade-long war and abandoned a vast amount of surplus and unexploded ordnance when forces pulled out in 1975.

During the past 40 years, about 40,000 people have died from explosions and 66,000 injured, according to the Vietnam Ministry of Labor, Invalids and Social Affairs.

The bomb was found buried about 5 feet below the surface, an indication of how entrenched the problem of unexploded ordnance is in the country, said Ngo Xuan Hien of Project Renew.

The bomb was discovered by the operator of an earth-moving machine who was grading and leveling the ground.

The nearby highway roughly follows the legendary Ho Chi Minh Trail, which was the target of intense bombing by the U.S. during the war.

Project Renew, which is supported in large part by humanitarian group Norwegian People’s Aid, destroyed the bomb at a safe location.

Project Renew has been expanding its operations into Dakrong District since July 2013. Its technical teams have surveyed 3.1 million square meters for cluster munitions and identified 16 confirmed hazardous areas consisting of 265,000 square meters that need full clearance.

As a result, 252 cluster munitions and other explosive remnants of war have been removed and destroyed so far.