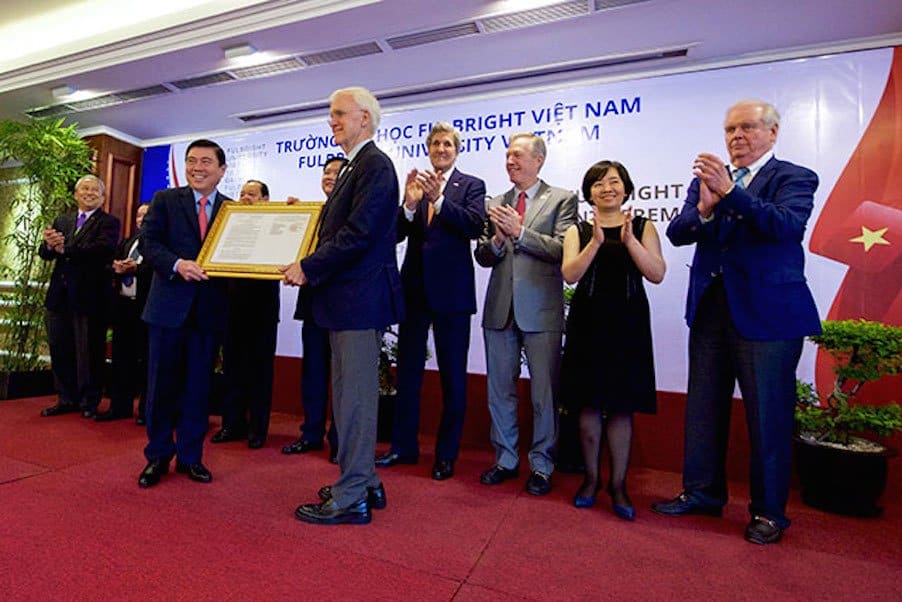 Below is a letter that was sent to Bob Kerrey about his controversial appointment as chairman of the Fulbright University Viet Nam board of trustees, announced by John Kerry during President Obama’s May 2016 visit to Viet Nam.  In case you’re interested and are not up-to-date on this situation, here are some articles that have appeared since:

When Phoenix Came to Thanh Phong: Bob Kerrey and War Crimes as Policy in Vietnam by Douglas Valentine (7.6.16; a reprint of a May 2001 article published after the story of his war crime broke that spring)

Bob Kerrey and the ‘American Tragedy’ of Vietnam by Viet Thanh Nguyen (20.6.16)

Bob Kerrey and Fulbright University – What were they thinking? by Mark A. Ashwill (8.7.16)

Fulbright University Vietnam – ‘Put this war behind us’ by Mary Beth Marklein (16.7.16)

Bob Kerrey’s Unit Slaughtered Civilians in Vietnam; Why Was He Appointed to Chair Fulbright University? by John Marciano (23.8.16)

Bob Kerrey, Fulbright University, and the Neoliberal Erasure of History by Paul Street (1.9.16)

We are writing with the heartfelt and urgent request that you resign from your position as chairman of the Fulbright University Viet Nam (FUV) board of trustees.

It is our firm belief that you should never have been offered this appointment and, having been offered it, should have declined the offer.  We strongly believe that there are other more appropriate roles for you to play in support of FUV, and that there are better qualified people without your historical baggage.

Mark Bowyer, an expat in Viet Nam, expressed doubt in an early June 2016 blog post that “reminding the world of previously unpunished US atrocities in Viet Nam is a judicious use of the political capital accumulated during Barack Obama’s recent successful visit.”

Bob Kerrey is letting his ego get in the way of US-Vietnamese rapprochement. The man has done a lot of good — but killing civilians, a war crime, makes him unfit to be head of the Fulbright University Vietnam Board of Trustees. For the good of the university, he should recognize that he is not the person for the job.

Finally, Linh Dinh, a Vietnamese-American writer, poet, and a signatory to this letter, wrote that “This sick and vain spectacle is hurting not just him but the university. By hanging on, he’s focusing the spotlight on his war crime.”

We agree with these assessments. Your appointment is a politically- and emotionally-charged issue that is not going to go away, least of all in Viet Nam.  In early June, you told the New York Times via email that you would resign, if you felt your role were jeopardizing FUV.  That time is now.

There are many US veterans who have returned to Viet Nam to do penance, so to speak, some on short trips and others for the long haul.  They are each making a modest contribution, trying to find a way to give back, to make amends, to make whole that which they and their government tried to destroy.  On a personal level, as you can imagine, they also find this experience to be therapeutic and even cathartic.

We’d like to take the liberty of offering you some advice.  Travel to Thanh Phong.  Arrange to meet with the victims’ family members and the survivors.  Ask for their forgiveness.  Burn incense and pray at the graves of the people you and your unit killed.  And do all of this with the greatest sincerity, contrition, and humility.

Offer to meet a local need, to build something of lasting value that will benefit the community.  We believe that these acts will be greatly appreciated and may help you find a measure of peace.  You could even invite the other members of your unit to join you.

Thank you for taking the time to read our note.  We look forward to hearing from you.

Wishing you peace and happiness,

Mark A. Ashwill, Ph.D.
Hanoi, Viet Nam
Educator; First US American to be awarded a Fulbright Senior Specialist Grant to Viet Nam, 2003
Author of Bob Kerrey and Fulbright University – What were they thinking? (7-8-16)

Viet Thanh Nguyen
Los Angeles, CA
Aerol Arnold Chair of English and Associate Professor of American Studies and Ethnicity at the University of Southern California
Author of The Sympathizer, Awards: Pulitzer Prize for Fiction, Edgar Award for Best First Novel by an American Author
Author of Bob Kerrey and the ‘American Tragedy’ of Vietnam (6-20-16)

Jeffrey St. Clair
Portland, OR
Editor of CounterPunch; Author of Born Under a Bad Sky

David Swanson
Charlottesville, VA
Director, World Beyond War
Author of books, including War Is A Lie

Michael Uhl, Ph.D.
Walpole, ME
Author Vietnam Awakening: My Journey from Combat to the Citizens Commission of Inquiry on US War Crimes and The War I Survived Was Vietnam: Collected Writings of a Veteran and Antiwar Activist (Oct. 2016)