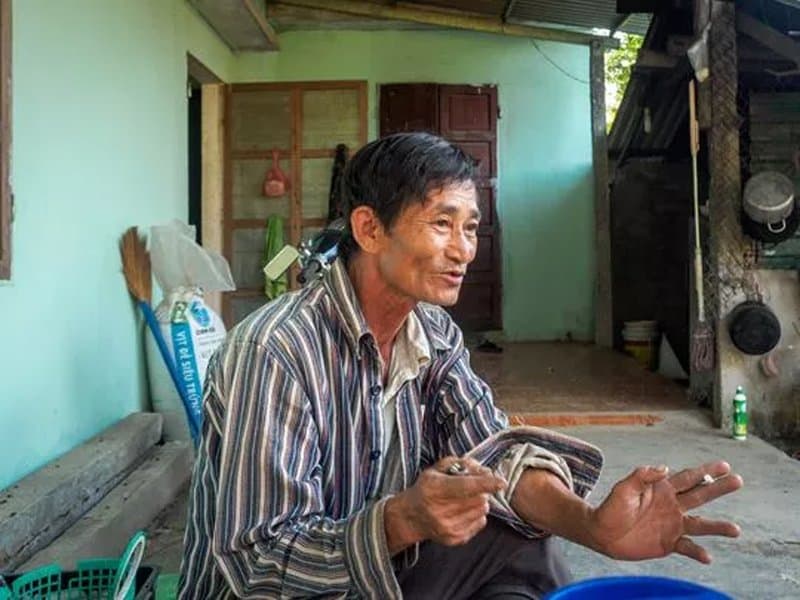 Photo: Do Ba, 60, was rescued by the helicopter crew of Hugh Thompson and Larry Coburn,
during the My Lai massacre, but his mother and two siblings were killed. Credit: Thomas Maresca/For USA TODAY

He was 11 on March 16, 1968, living a relatively carefree life in this central Vietnam village, even though his country was in the middle of an escalating war.

Everything changed early that morning when about 100 American soldiers arrived on a search-and-destroy mission to hunt for Viet Cong guerrillas. Instead, they found a quiet village filled mostly with women, children and the elderly.

What followed was perhaps the most infamous incident from the Vietnam War, which lasted from 1965 to 1973. American soldiers systematically herded and slaughtered the terrified, unarmed villagers, raping women and burning homes along the way.

Before the day was over, 504 Vietnamese villagers were killed in what would be known as the My Lai massacre, named for one of the hamlets of Son My.

Cong was forced into his family’s dugout shelter with his mother and four siblings. An American soldier tossed in a grenade. Cong was the only survivor — lying wounded and unconscious for hours before his father and neighbors found him.

As Friday’s 50th anniversary of the massacre approached, Cong said he is still haunted with nightmares from that day. One image that sticks in his mind is the sight of his 2-year-old sister, Chinh, who was cut in half by the grenade blast and laid out on a bamboo mat used for drying rice.

“Whenever the anniversary day comes near, I think about her so much,” Cong said. “And my heart hurts. This year especially.”

Cong, 61, was the director of the My Lai Massacre Museum, until he retired last year. Like him, many survivors are reliving their memories.

Pham Thi Thuan, now 80, recalled hearing gunfire but thought it was from the South Vietnamese army, perhaps coming to kill chickens or pigs. But American soldiers forced Thuan and her two daughters, ages 5 and 3, into a small irrigation ditch along with hundreds of neighbors.

The soldiers fired round after round, stopping to look for survivors before firing again. Thuan somehow avoided being shot, while desperately keeping her daughters quiet. Her eyes teared up as she recalled climbing out of the ditch long after the shooting stopped.

“I had to climb over so many bodies,” she said. “I was crying so much. I wondered what had happened, why we were the only ones left to survive.” There were 170 people killed in that ditch.

Her daughter, Nguyen Thi Linh, who was 3 at the time, remembers only glimpses of the day — the screaming, the blood. She recalled that the American GIs were chewing gum.

“Afterward I was always scared,” she said. “I would close my eyes when I ran through the rice fields. I got scared when the wind whistled through bamboo groves.”

Cao Thi Do, 80, points out a mass grave in a rice paddy. She had been in a neighboring village that morning but returned to find two of her children were killed in the carnage.

As the sorrow showed on her face, she quickly expressed a stunning sentiment repeated by many survivors: forgiveness.

“I still think always about what happened, but I forgive them,” she said. “I have to do it for the future. If I keep the hatred, then my children will keep it, and their children. I’m still very sad, but I have to forgive.”

A neighbor, Do Ba, now 60, was herded into the irrigation ditch with his mother and two siblings. They were killed, but he survived, grazed by a bullet that left a scar on his chest.

His story highlights one of the few heroic moments of the day. He was rescued by helicopter pilot Hugh Thompson and crew member Larry Coburn, who evacuated him to nearby Chu Lai. From there, he was sent to a hospital in Quang Ngai.

Thompson and his crew helped stop the massacre, landing their helicopter between American soldiers and fleeing villagers and even threatening to fire on their own troops if the killing continued.

Ba keeps a photo of Thompson and Coburn on a household altar, a place of honor usually reserved for ancestors. “Thompson is like a father to me,” he said. “I wouldn’t have survived without him.”

Another soldier, Ron Ridenhour, would bring the massacre to light. Ridenhour had heard the stories about My Lai from other soldiers, investigated it on his own and sent letters to President Nixon, Defense Secretary Melvin Laird and members of Congress, recounting the stories of soldiers “slaughtering villagers like so many sheep.”

The letters led to an investigation a year after the massacre, which ultimately brought only one conviction: Lt. William Calley, leader of a platoon that had done much of the killing. Calley served 3½ years under house arrest.

The massacre wasn’t widely known to the public until freelance journalist Seymour Hersh broke the story in November 1969. The horrifying details of his account would amplify the growing anti-war movement in the United States.

“The revelation of My Lai was critical,” said Michael Uhl, an author, teacher and charter member of the group Veterans for Peace. He returned to Vietnam with a group of veterans who will attend 50th-anniversary ceremonies at My Lai.

Uhl was a military intelligence officer stationed in Quang Ngai, the main city near My Lai, eight months after the massacre. He said the everyday brutality he witnessed by fellow soldiers and officers on a daily basis turned him against the war and drove him into activism when he returned to the U.S.

“My Lai was the tip of the iceberg,” he said. “Once that had broken in the press, it created an opening for us to be able to expand on that and give our version of what was happening in the wider war.”

For Cong, as the anniversary again triggers sleepless nights and brings widespread attention to the massacre, he said it is vital to keep the message of My Lai alive for new generations.

“Through (My Lai) we understand more about the horrors of war,” he said. “I hope that the young generations of both countries can keep the peace in the world.”