50 years on, veterans find healing by returning to Vietnam to help 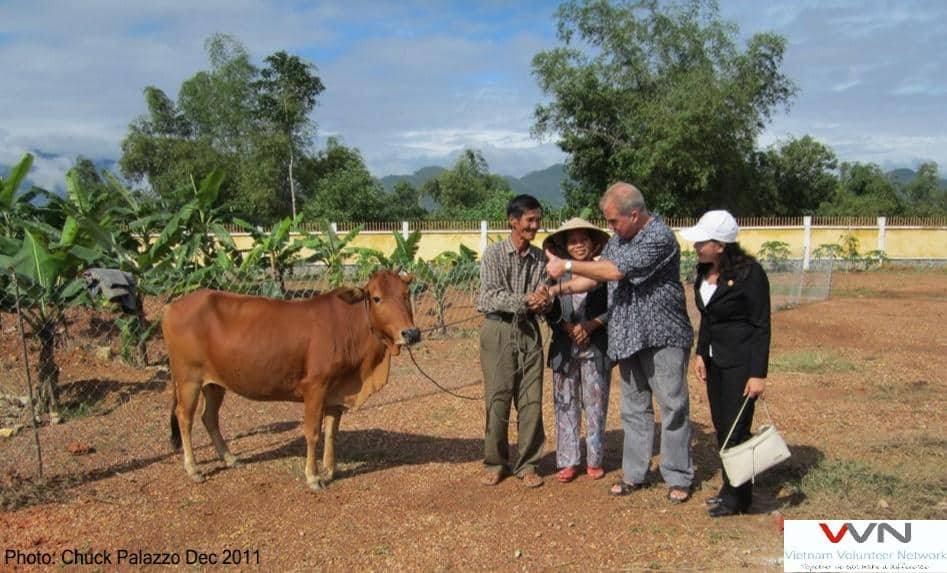 This article originally appeared at PBS.org.

Fifty years since the first major American combat unit was deployed to Vietnam, the lethal legacies of war still haunt generations of civilians in that country. Special correspondent Mike Cerre, who served in that conflict, reports from Danang about some Americans who have returned in hopes of making a difference.

Special correspondent Mike Cerre went back to the site of the initial Marine landing in Da Nang, and met a group of American veterans who have returned to the country to fight a very different battle.

JUDY WOODRUFF: Fifty years ago this week, the U.S. began its Rolling Thunder bombing campaign in what was then North Vietnam. It was followed by the landing of the first major combat units in South Vietnam on March 8, 1965.

MIKE CERRE: As the first major American combat unit deployed to Vietnam in 1965, the Ninth Marine Expeditionary Brigade landed in Da Nang. The Marines landed with only their packs on their backs on a limited mission to protect the strategic air base in Da Nang.

The landing was deceptively quick and peaceful.

MIKE CERRE: These Marines soon became part of one of the longest and most bitterly contested military campaigns in American history, which would span two decades.

Fifty years later, Da Nang’s beaches are a popular resort destination for the Vietnamese and foreigners. It’s also home for a handful of Vietnam veterans, who came back here to live and work on one of the most dangerous legacies of the war, which the Vietnamese refer to as the American war.

CHUCK PALAZZO, Vietnam Veteran, U.S. Marine Corps: My name is Chuck Palazzo. The first time I came to Vietnam was in 1970 during the war. I was a U.S. Marine. I had just turned 18 years old and I found myself 8,000 miles away from my home turf of New York.

I did have a goal and a dream to come back here at some point and do something positive here in Vietnam and for the Vietnamese people.

And my organization funds education for disabled children and for victims of unexploded ordnance.

MIKE CERRE: I’m Mike Cerre. And like the others, I first came to Vietnam during the war. In 1970 and ’71, I was with the Marines, flying as forward air observer out of Da Nang Air Base.

MIKE CERRE: Agent Orange, the defoliant used extensively by the American military during the war, contains dioxin, a dangerous compound believed to cause birth defects and cancers in Vietnamese families and American veterans.

CHUCK PALAZZO: Well, the older boy who is laying here, he’s just about incapacitated 100 percent at this point.

MIKE CERRE: After a 30-year career as a software developer, a recent divorce and a long struggle with post-traumatic stress syndrome, Chuck sold his house and most of his possessions and moved to Da Nang to start a software company, so he could work with a local Vietnamese organization assisting Agent Orange victims.

CHUCK PALAZZO: One of my motivations back then, four or five years ago, was to resolve my own issues, as well as to work with the victims. I continue to heal as a result of the work that we do with the Agent Orange victims here.

I have no medical or scientific background, but just interacting with kids, I could see that it makes them happy. And it makes me happy, too. I enjoy it.

MANUS CAMPBELL: When I learned that, for $60 a month, I can bring a child out of his home, where he’s basically in bed or on the floor watching TV all day, bring him to a school, where he can interact with his own peers, he can realize that he’s not alone in life, that there are other people just like him, and he can develop friends.

MIKE CERRE: The Da Nang International Airport, formerly the Da Nang Air Base, remains one of the largest and most toxic Agent Orange sites in Vietnam, with contamination levels 350 times international safety standards.

SEN. PATRICK LEAHY, (D) Vermont: We spent $100 million to remediate this. We built a state-of-the-art facility.

MIKE CERRE: Senator Patrick Leahy is a longtime advocate of funding NGOs helping Vietnam deal with these lethal legacies. He was in Da Nang last year for the inauguration of his three-story oven-like building to cook the dioxin out of the soil, the dangerous compound which has been contaminating the local water and food chain.

The U.S. has never agreed to pay Vietnam reparations or the $3 billion in reconstruction funds President Nixon promised during the Paris peace accords that ended the American involvement in Vietnam in 1973.

SEN. PATRICK LEAHY: Here, we have both a moral and a humanitarian reason to be involved. It’s in our long-term best interests to help bring about stability in Vietnam and help Vietnam recover from the ravages of war that never should have occurred.

MIKE CERRE: Da Nang’s thatch roof huts and single-story buildings I remember from the war have long since been replaced by one of Vietnam’s most progressive metropolises and a new generation of Vietnamese, who make little, if any reference, to the war.

The beaches where the Marines originally landed are now experiencing a new wave, foreign and domestic investors, as a result of its booming economy since the trade embargoes were lifted.

Do you really feel accepted here now? I mean, do they know that you were here during the war?

CHUCK PALAZZO: They do. Yes, they do.

CHUCK PALAZZO: There’s no animosity, no — no friction at all. They have all welcomed me with open arms. And they invite me to their homes. We drink beer together. And I feel very comfortable and very much part of the community here.

Because of my relationship with Vietnam in the past and what happened to me as a 19-year-old during the war shaped my life, to the point where I came back here to do something good for the people.