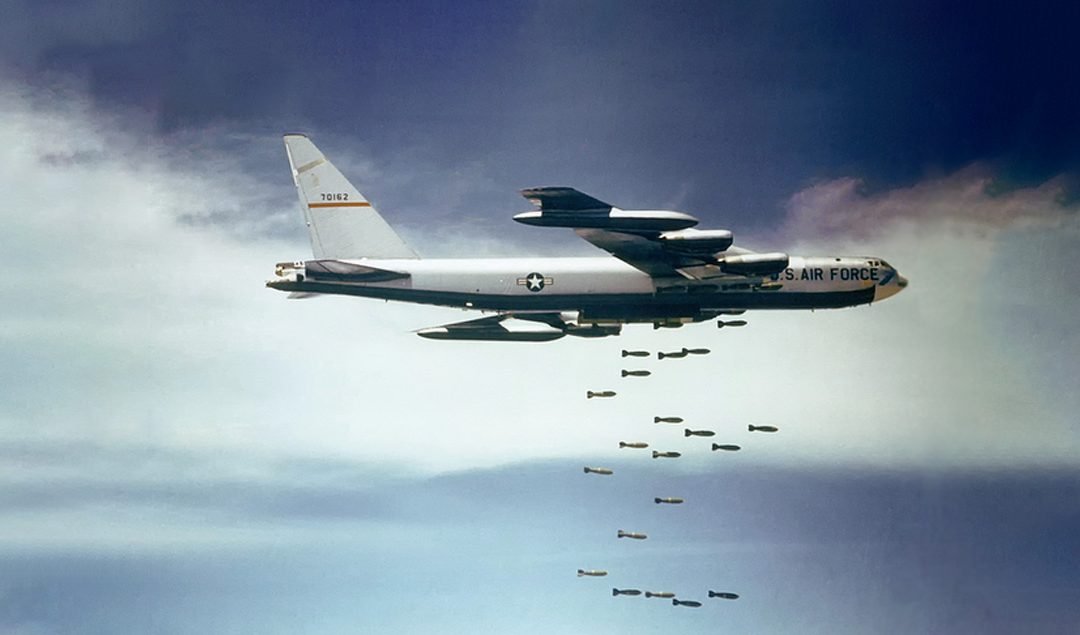 The Pentagon’s official history says that a heavy bombardment by B-52s in December, 1972 pushed the North Vietnamese to return to negotiated peace. What are the fact?

by Arnold Isaacs at the History News Network

Later this week we will reach a milestone that should get careful attention from historians — specifically, historians of the Vietnam War.

Wednesday, October 26 will mark 50 years to the day since Henry Kissinger declared that “peace is at hand” in Vietnam. Those words, promising an imminent end to a long, frustrating and deeply unpopular conflict, electrified the United States and the world when they were spoken, and one can guess they will be recalled fairly widely on the coming anniversary day. Far more important than just remembering Kissinger’s words, though, is to revisit the larger (and largely forgotten) story of what actually happened in October 1972, and what those facts tell us about events in the next three months and the peace agreement that was eventually concluded, though without bringing peace, in late January 1973.

The first thing to remember is that when Kissinger spoke in October, he was not referring to an agreement that was still under negotiation or in any way hypothetical or conditional. The peace that was at hand on that day was a final draft that had been officially and unequivocally approved by Richard Nixon, President of the United States, and North Vietnam’s prime minister Pham Van Dong (that’s verified in both Nixon’s and Kissinger’s memoirs, by the way).

None of this was secret, at the time or later. A few hours before Kissinger stepped up to the podium in the White House briefing room to deliver his pronouncement, Hanoi’s official news agency broadcast an announcement confirming the agreement and giving a detailed outline of its terms.

Remembering these facts is important not just as a matter of historical accuracy.  They are relevant to the present, too, because they conclusively disprove a false belief that remains influential to this day: the claim that the final U.S. bombing campaign in North Vietnam in the last weeks of 1972, most often remembered as the “Christmas bombing,” was the decisive factor in forcing the enemy to accept the January agreement.

During the last 50 years, that false memory has helped perpetuate an exaggerated faith in air power that distorted American strategic thinking in Vietnam and ever since. In fact, comparing the October and January texts shows in plain black and white that the North Vietnamese conceded nothing in the final agreement that they had not already conceded in the earlier round, before the bombing. Aside from a few minor procedural changes and a handful of cosmetic revisions in wording, the two texts are for practical purposes identical, proving that the bombing did NOT change Hanoi’s decisions in any meaningful way.

The record is equally clear that it was the United States, not North Vietnam, that reneged on the October agreement. After accepting the final draft and scheduling a formal signing ceremony, U.S. negotiators twice postponed the signing date and then canceled it indefinitely after America’s South Vietnamese ally — which had been excluded from the negotiations — flatly refused to accept the agreement. That was hardly a trivial reason, but the uncomfortable fact remains that Nixon and Kissinger solemnly concluded a hugely important deal and then refused to carry it out.

Given that crystal-clear record, the myth of the Christmas bombing as a great military success has shown remarkable staying power in both the U.S. national security establishment and in public memory. A telling case in point is the official website of the Pentagon’s Vietnam 50th anniversary commemoration, which is riddled with false assertions about those events. To mention just one of many examples, the site’s Air Force “fact sheet” says nothing about the October draft or the U.S. backtracking on that agreement (those are not mentioned anywhere else on the site, either). Instead, it says only that “as talks dragged on,” President Nixon ordered the December air campaign, after which “the North Vietnamese, now defenseless, returned to negotiations and quickly concluded a settlement.” The fact sheet then states this conclusion: “American airpower therefore played a decisive role in ending the long conflict.”

Elsewhere, the commemoration site repeats in various places that Hanoi’s delegates “unilaterally” or “summarily” broke off the post-October talks — which, it should be remembered, were entirely about changing provisions that the U.S. had already accepted. The Pentagon’s account gives a specific date for the North Vietnamese withdrawal: December 18, and claims that Nixon’s bombing order was intended to force them back to the negotiating table.

In fact, actual negotiations ended several days before that, and if anybody walked out it was the Americans, at least their chief negotiators. Kissinger left Paris on the 13th; his most senior aides flew out a day or so later. The last pro forma meeting between the two sides took place on the 16th and when it ended, the North Vietnamese said they wanted to proceed “as rapidly as possible.” Nixon issued the Linebacker II order on the 17th, incidentally, not the 18th.

To a surprising extent, the false narrative appears to have largely suppressed the true story even though the facts are clear and available. Search online for “peace is at hand” or “Linebacker II,” and you will find plenty of entries that reflect the same inaccuracies that prevails on the Pentagon’s commemoration site. You will have to look a lot harder to find sources that will recall the documented facts. This month’s 50-year “peace is at hand” anniversary, and those in the coming months that will mark the Christmas bombing and the Paris agreement, present an opportunity to look back and retrieve a more truthful understanding of a painful but important chapter in our past.  I hope a significant number of Americans, including those who are involved in current national security policy issues and historians who value the truth, are ready to make that effort.

Arnold R. Isaacs was a journalist in Vietnam from 1972 to 1975 and is the author of Without Honor: Defeat in Vietnam and Cambodia, described in Foreign Affairs magazine as “indispensable for an understanding of the last phase of the Vietnam war.” A new and updated edition of that book will be released later this year by McFarland Publishing Co.