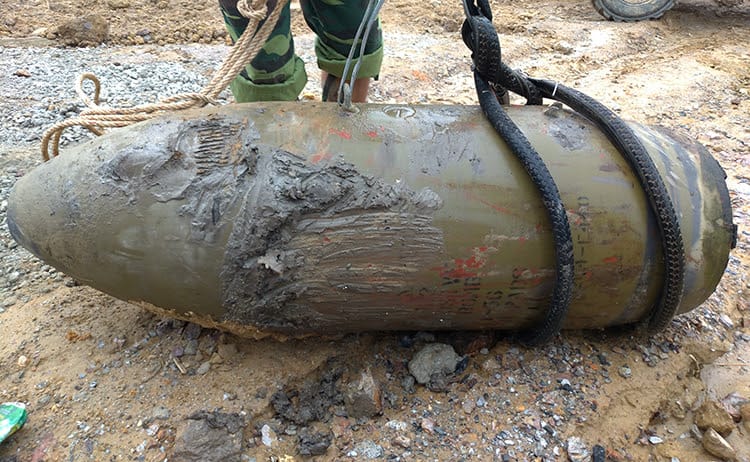 While fishing on the Ro River, people discovered a part of the bomb that was exposed to the water surface, the shell was still shiny.

On the morning of July 2, Thanh Chuong Military Command, in coordination with the Military Commission (Nghe An Provincial Military Command), successfully recovered a very large bomb from the Ro River. The bomb is 1.2 m long, the widest spot diameter is 45cm, weighs 330kg (more than 700 lbs.), and the shell is shiny.

“This is the kind of bomb left over from the war against the U.S. The scope of the bomb has a radius of more than 500m,” one official said and said the bomb was transferred to vehicles and transported for safe disposal elsewhere.

Earlier that day, Thanh Chuong district residents discovered the bomb, partly exposed in the water, when they went to drop their fishing nets in the Ro River. They subsequently reported it to the government, and the Thanh Chuong District People’s Committee put up a warning sign and sent guards to watch it.

The Ro River flows to Lam River.  Due to hot weather that has lasted for many days, the river, more than 20m wide, had little water.