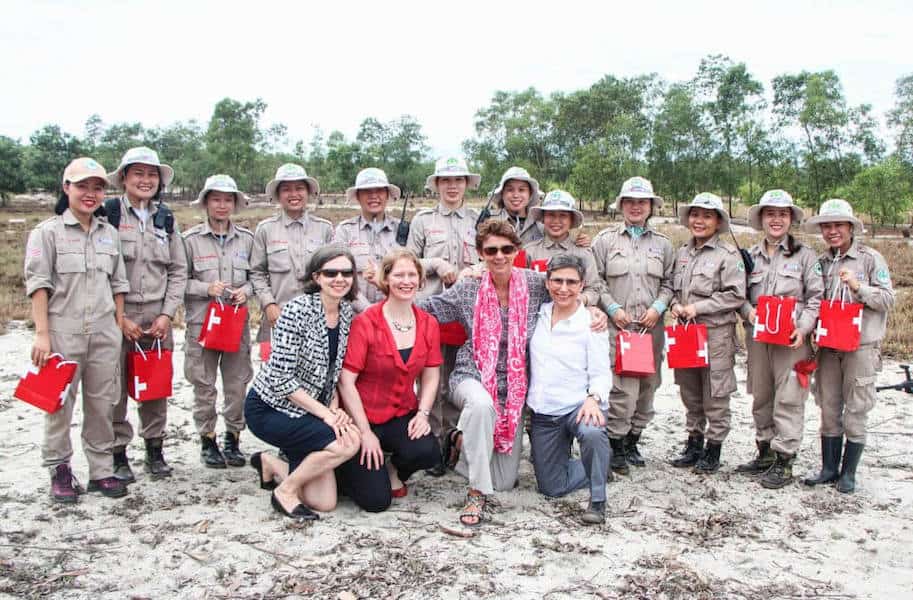 Hai Lang, Quang Tri (May 9, 2019) – Four leaders of the international community in Vietnam, female ambassadors of Switzerland, Norway, Canada, and New Zealand (known as G4 Group) in Vietnam, came to Quang Tri on Thursday to see a team that cleared the whole female work site.

The delegation includes Ambassador Deborah Paul (Canada), Wendy Matthews (New Zealand), Grete Løchen (Norway), and Beatrice Maser Mallor (Switzerland). Their two-day official visit was to directly learn about the aftermath of war in Quang Tri, especially the ongoing effort to survey and clear up the remains of war after the war but also threaten. the life of the local people. Ambassadors also visited development projects funded by G4 countries.

This is one of the two teams that broke the fighting scene, which was implemented in 2018 with funding from the UK aid agency, the Department of International Development (DFID). One of the clearance teams of RENEW- NPA is Vietnam’s first women’s clearance team, professionally trained and certified for clearance. The contaminated soil area that the team is working in is in Hai Lang district.

Team leader Nguyen Thi Thuy, a 30-year-old mother with a daughter, said today was a special day for her and her team members to welcome these ambassadors. “The whole team feels encouraged when meeting female ambassadors,” Thuy said. “Their visit encouraged us a lot. That emphasizes the important role of women in all areas of life. ”

Thuy added, “We hope they talk about the problem of landmine and ERW in Vietnam so that we will have more support to continue the work to make Quang Tri safe from mines and ERW. “

From October 2016 to the present, Thuy’s all-female field clearance team has discovered and safely destroyed 275 explosive objects, including 104 cluster bombs, in Thuan Tien and Tay Tan An villages. Her team cleared and handed over nearly 500,000 m2 of safe land to the community, for now, to use and develop. The team’s work to nat has benefited 4,621 people living in these two villages.

Project RENEW  is a cooperation program between Quang Tri provincial government and foreign non-governmental organizations established in 2001. The project has a mission to restore the environment and overcome the consequences of war with a focus on solving Unexploded ordnance.

Norwegian People’s Aid Organization (NPA): One  of the world’s leading organizations in the field of Humanitarian Disarmament. NPA has been operating in Vietnam since 2008 after signing an agreement with Quang Tri province to support the development of mine and ERW capacity for Project RENEW. Current resources include 32 teams, divided into 02 teams of field clearance, 01 non-technical survey team, 04 mobile teams and 25 technical survey teams.