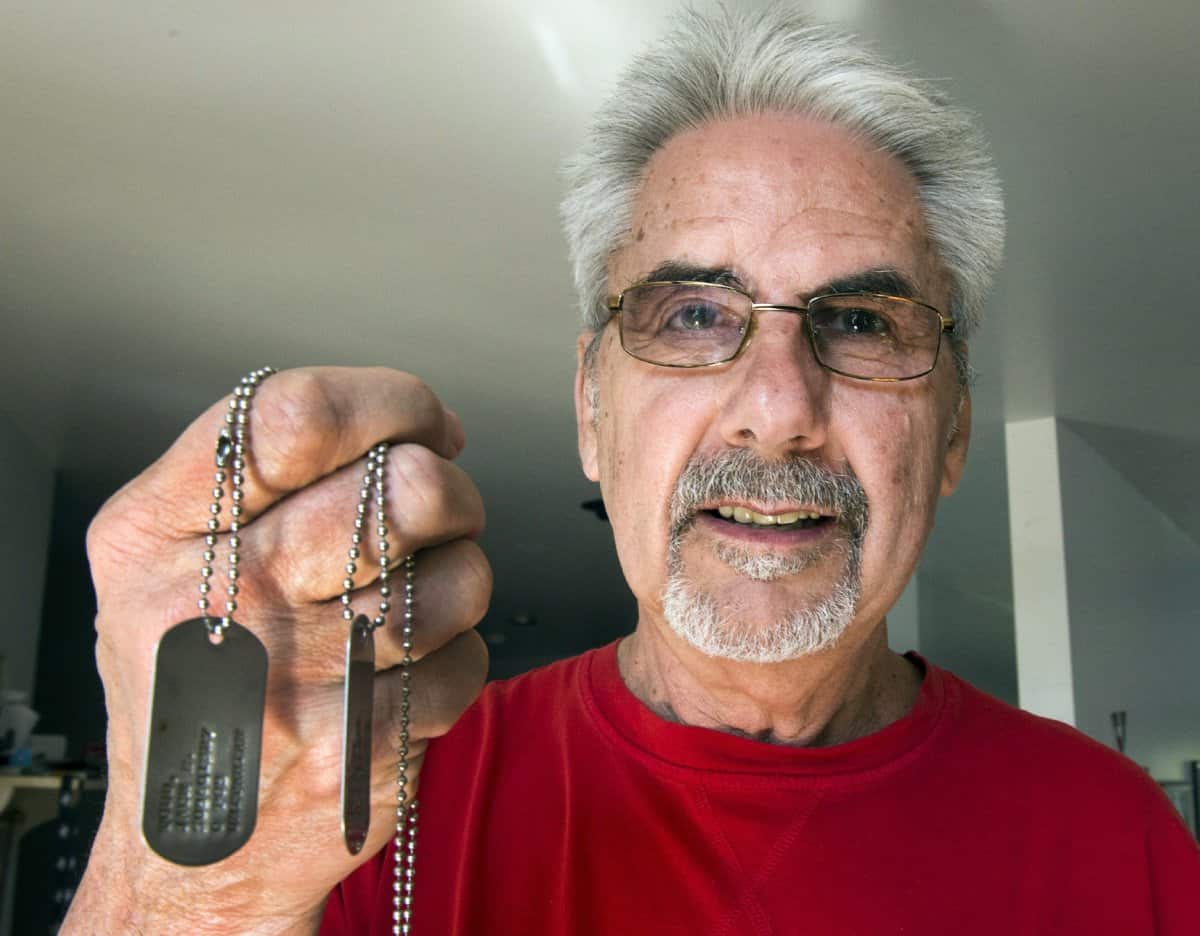 PHOTO CAPTION: Jack Todd, who moved to Canada to avoid the Vietnam War, holds up his dog tags in his home Friday, April 17, 2015 in Greenfield Park, Quebec. Photo Credit: THE CANADIAN PRESS/Ryan Remiorz

If Ken Burns and Lynn Novick had taken a serious look at the history of anti-Vietnam War draft and military resisters in Canada in their documentary The Vietnam War, they might have been surprised.  While a recurring theme in the series is the alleged hostile reception Vietnam veterans got from the antiwar movement when they came home, the already established draft resister community in Canada welcomed military deserters, including antiwar GI activists and Vietnam veterans, in ever growing numbers in the late 1960s and early 1970s.  The antiwar community offered immigration counseling to help deserters gain the “landed immigrant” status to remain in Canada.  By the early 1970s, the number of draft and military resisters had grown to an estimated 50,000.  Ottawa and Washington claimed not to have kept statistics on U.S. war resisters in Canada.

In September 1974, draft resisters and deserters stood shoulder-to-shoulder when President Gerald Ford announced a Clemency Program for Vietnam war resisters.  Exiled war resisters from cities across Canada and London, Paris, and Stockholm gathered in Toronto at a conference convened by AMEX-Canada, the magazine of U.S. draft and military resisters in Canada.  The exiled war resisters voted to boycott Ford’s punitive “clemency,” which required draft resisters and deserters to perform up to two years of “alternative service” and take a loyalty oath to the United States.  A new less-than-honorable discharge was created for Vietnam War deserters — the “Clemency Discharge.”  The war resisters, backed by a delegation of Vietnam Veterans Against the War (VVAW), demanded unconditional amnesty for draft and military resisters, who refused to fight in a war they considered “an unjust and immoral” war.  They also pressed for the upgrading to honorable of the less-than-honorable discharges of 790,000 Vietnam-era veterans.

The exiled war resisters’ boycott of Ford’s clemency plan was a remarkable success.  Only 19 percent of eligible war resisters participated.  The boycott opened new political space in which to organize for amnesty.  Activists from AMEX-Canada, worked with the New York-based National Council for Universal and Unconditional Amnesty (NCUUA) to make amnesty an issue in the 1976 presidential campaign.

During that campaign in July 1976, amnesty activists, including exiles, took to the floor of the National Democratic Convention to make the case for “universal and unconditional” amnesty.  The activists organized support from convention delegates to nominate Fritz Effaw, a draft resister exiled in London, for vice president.  Gold Star Mother Louise Ransom, whose antiwar soldier son was killed in Vietnam on Mother’s Day 1968, nominated Effaw in an emotion-packed speech. Ransom declared, “Total amnesty would be a fitting memorial to the sacrifice of my son.”

When disabled antiwar Vietnam veteran Ron Kovic was wheeled to the podium to second Effaw’s nomination, the crowd fell into a somber silence.  “I am your living death,” Kovic told the startled delegates.  “Your memorial day on wheels.  Your Yankee Doodle Dandy.  Your John Wayne come home.  Your Fourth of July firecracker exploding in the grave.”  The delegates squirmed in their seats as Kovic brought harsh realities of the Vietnam War to the convention floor.  Then Kovic turned to the matter at hand.  “I have the proud distinction of nominating Fritz Effaw for vice president of the United States.”

Effaw told the delegates, “I am proud to come before this convention to represent war resisters.”  Effaw urged the delegates to go beyond the draft resister only “pardon” proposed by Jimmy Carter, who would be nominated by the Democratic party as its candidate for president.  He pressed the Democrats to support unconditional amnesty for draft and deserters as well as upgraded discharges for Vietnam-era veterans.  As Effaw wheeled Kovic away from the podium, many delegates stood and applauded.

How did Burns and Novick miss the story of the solidarity among draft resisters, deserters, and antiwar Vietnam veterans?  It played out at the Democratic National Convention on national network TV in primetime. It is also discussed in detail in Professor John Hagan’s Northern Passage: American Vietnam War Resisters in Canada (Harvard University Press, 2001).  Burns and Novick substituted a dramatic interview with Army deserter Jack Todd for the history of draft and military resisters in Canada.

Todd’s life illustrates the ways the Vietnam War defined life choices for draft-age men. We learn that Todd volunteered for the Marine officer-training program at the University of Nebraska but washed out because of a bum knee. He was officially discharged from the Marine Corps but subsequently drafted into the Army.  By then his conscience would not let him fight in Vietnam. He wrestled with what to do.  It was either jail or Canada.  He crossed the border from Washington in January 1970. “That was the bravest thing I ever did,” Todd said in Episode 8.

Two episodes later Todd recalled that he grew angry and frustrated as President Richard Nixon escalated the Vietnam War and details of the Watergate scandal leaked out.  He felt the agony of exile.  He wanted to make his voice heard in the United States on the war and Watergate, but he would face arrest if he went home to register his opinion.  Instead, he officially renounced his U.S. citizenship.  “I thought it was a political act.”  As time passed he realized that his renunciation of his U.S. citizenship created a new set of legal problems that made it difficult, if not impossible, for him to return to the United States. “It was the stupidest thing I have ever done in my life,” Todd stated in Episode 10.

Todd’s narrative unfolds over Episodes 8, 9, and 10 in a manner apparently confusing to some viewers.  It has already stirred controversy over to what his “stupidest thing” comment referred.  Was Todd referring to refusing to fight in Vietnam?  Or renunciation of his U.S. citizenship?  Foreignpolicy.com blogger Thomas Ricks argues that Todd’s “stupidest thing” comment referred to going AWOL to Canada in a September 28, 2017 post.  Ricks, a prominent writer on military and national security issues, writes, “Army deserter Jack Todd, who defected to Canada, says now `it’s the greatest mistake I ever made in my life.’  Other activists apologize for their youthful errors.”  This is a needless debate. The transcript for Episode 10 clearly shows that Todd’s “stupidest thing” reference was to his renunciation of U.S. citizenship.  So, too, does Todd’s memoir Desertion: In the Time of Vietnam (Houghton Mifflin, 2001).

Editor’s Note: Thanks to Bruce Beyers for sending this link to the CBC archive video of the amnesty conference for Vietnam deserters that Jack Colhoun writes about. The woman featured in it is Gold Star Families for Amnesty spokeswoman Patricia Simon.