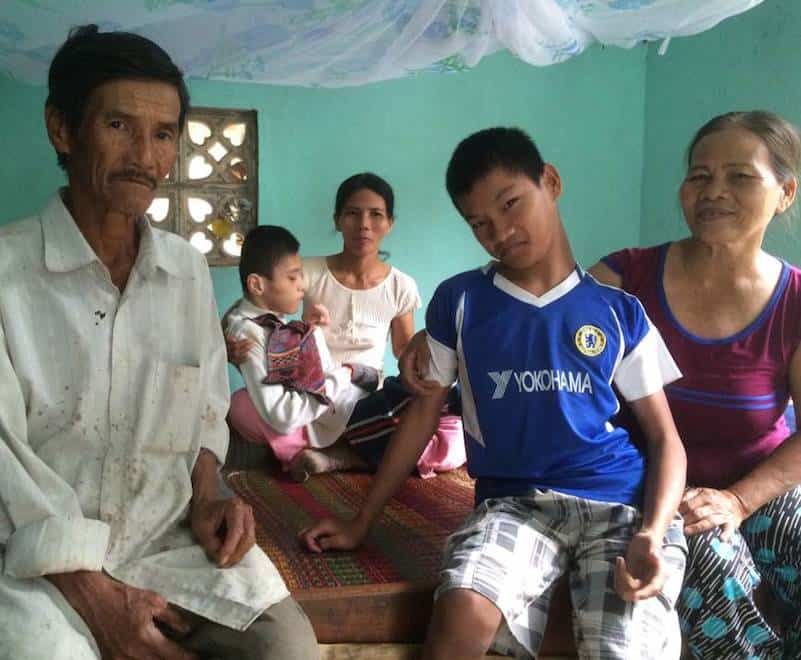 Last month, Urasoe in Okinawa pledged to conduct a survey of former base employees to ascertain the extent of environmental contamination at Camp Kinser, a 2.7-square-kilometer U.S. Marine Corps supply base located in the city just north of Naha. Urasoe’s director of planning, Setsuo Shimoji, announced the municipality would work with prefectural authorities to carry out the investigation, and that the city would also request funding from the national government.

This is believed to be the first time that such a large-scale survey of former base workers has been launched in Japan.

Triggering Urasoe’s decision were Pentagon documents, obtained by The Japan Times under the U.S. Freedom of Information Act, that revealed serious contamination at Camp Kinser. According to the reports, military supplies returned during the Vietnam War leaked substances including dioxin (aka TCDD), polychlorinated biphenyls (PCBs) and insecticides within the base, killing marine life. Subsequent cleanup attempts were so ineffective that U.S. authorities worried civilian workers may have been poisoned in the 1980s, and, as late as 1990, they were concerned that toxic hot spots remained within the installation.

Asked whether USFJ would cooperate with Urasoe’s survey, Carter replied that they had not been contacted by city authorities. She also ruled out health checks for past and present Camp Kinser military personnel.

Last year, suspicions that Camp Kinser remains contaminated were heightened when wildlife captured by Japanese scientists near the base was found to contain high levels of PCBs and the banned insecticide DDT.

Japanese officials are blocked from directly investigating pollution on U.S. bases because the Japan-U.S. Status Of Forces Agreement does not authorize them access. Although an amendment to SOFA last September gave Japanese authorities the right to request inspections following a toxic spill or imminent return of land, permission remains at the discretion of the U.S.

Consequently, until now research has been limited to land already handed back to civilian usage. These checks suggest that the problem of U.S. military contamination in Okinawa is chronic. In recent years, a range of toxins exceeding safe levels have been discovered on the island, such as mercury, lead and cadmium.

In November the Okinawa Defense Bureau revealed that a housing area in Kamisedo, in the town of Chatan, was contaminated with dioxin at levels 1.8 times the safety limit set by the government. The problem came to light after residents complained of offensive smells emanating from the land, which used to be a U.S. military garbage tip prior to return in 1996.

Meanwhile, Japanese officials released test results last month on three more barrels unearthed from the Pentagon’s defoliant dump site in Okinawa City. The barrels — the latest of 108 found beneath a children’s soccer pitch — measured dioxin levels of between 83 and 630 times the safety limit.

The World Health Organization categorizes dioxin as “highly toxic” and links it to cancer, damage to the immune system, and reproductive and developmental problems. In Okinawa, awareness of the dangers of dioxin is low. Last year in Okinawa City, for example, laborers at the former soccer pitch were photographed working without safety equipment, and storm water was pumped into a local conduit without any tests for contamination.

Now, expert advice is coming from a country with tragic experience of Pentagon dioxin poisoning: Vietnam.

“On Okinawa, people still don’t know about the risks. The problem is very new for them, but they need to take action as soon as possible,” Phan Thanh Tien, vice-president of the Da Nang Association for Victims of Agent Orange/Dioxin (DAVA), told The Japan Times last month.

DAVA was established in 2005 with the aim of raising awareness in Vietnam of the dangers posed by dioxin left in the environment from the Pentagon’s use of defoliants in the Vietnam War. Between 1962 and 1971, during Operation Ranch Hand, the U.S. military sprayed 76 million liters of herbicides in Southeast Asia. Named after the colored stripes around the barrels, many of these herbicides, such as Agents Pink, Purple and — by far the most common — Orange, were heavily contaminated by dioxin during the production process.

In the Vietnam War, U.S. forces stored approximately 18 million liters of defoliants at Da Nang Air Base and sprayed them over nearby countryside to kill enemy food crops and strip supply routes of jungle cover.

According to U.S. veterans interviewed by The Japan Times, these defoliants were shipped via Okinawa, America’s most important staging post for the Vietnam War. Former service members contend that defoliants were stockpiled at numerous bases — including Camp Kinser, then known as Machinato Service Area — and sprayed to keep runways and perimeter fences clear. Veterans also claim that surplus and damaged barrels of defoliants were buried within Okinawa’s bases.

U.S. Department of Veterans Affairs records show that more than 200 retired service members are sick with illnesses they believe are caused by exposure to Agent Orange while serving in Okinawa. A number of military documents corroborate their claims, including the recent Camp Kinser FOIA release that cites the discovery of “dioxin (agent orange component).”

Despite this evidence, the U.S. Department of Defense denies Agent Orange was ever present on the island. In 2013 it published a report that concluded there were no “records to validate that Herbicide Orange was shipped to or through, unloaded, used or buried on Okinawa.” The same Pentagon-funded scientist who wrote that report later attributed the discovery of dioxin beneath the Okinawa City soccer pitch to the disposal of kitchen or medical waste.

Such denials do not surprise the DAVA vice-president. For decades, Phan explained, the U.S. government has been trying to mislead people about the impact of dioxin in Vietnam, too. For example, during the war it assured people that defoliants would only harm trees.

“They lied. They knew about the human impact but they said nothing,” said Phan.

According to DAVA, today there are approximately 5,000 dioxin victims in Da Nang, which has a total population of 1 million. Nationwide, the Vietnamese Red Cross calculates that 3 million are sick; DAVA estimates the number as closer to 4 million.

Le Van Dan knows first-hand the truth behind the Pentagon’s lies. During the war, he fought on America’s side in the South Vietnamese Army, and he witnessed the U.S. planes spraying the mountains near Da Nang; later, he saw the dead trees left in their wake. The U.S. military had assured the Vietnamese public the spray was harmless, so he and his fellow soldiers drank the local water and ate the fruit and vegetables. Today the 66-year-old suffers from skin and heart diseases, his daughter struggles to breathe, one grandchild has cerebral palsy and another is bedridden.

Vietnam’s Ministry of Health categorizes 17 illnesses as being related to dioxin, including cancers of the prostate and lung, Type-2 diabetes and spina bifida. The U.S. government recognizes a similar list of dioxin-linked diseases, and it compensates sick American veterans who served in Vietnam. But it does nothing to help dioxin-poisoned Vietnamese people. Many — like Le’s family — are too sick to work, so they depend upon support from charities and organizations such as DAVA.

“America’s use of Agent Orange in Vietnam was a war crime; it was chemical warfare. Today, we are starting to see the fourth generation of dioxin victims, so you can even call it a form of biological warfare. And the problem still isn’t over,” said Phan.

A number of dioxin hot spots remain on former U.S. military land in Vietnam; one of them is at Da Nang Air Base, today the city’s international civilian airport. Although the U.S. government refuses to recognize the human impact of its dioxin in Vietnam, it has been engaged in environmental cleanup work at Da Nang International Airport since 2012. The estimated date of completion is later this year.

Many have praised the cleanup as a positive first step — albeit long overdue. The U.S. has also promised to help to remediate dioxin hot spots on other former base sites in Vietnam.

This stands in stark contrast to Japan, where SOFA places the financial burden of cleaning up U.S. military contamination entirely on Japanese taxpayers. Tokyo has made no discernible attempts to force the U.S. to shoulder more responsibility.

In 2014, Phan visited Okinawa to attend the island’s first international symposium about military contamination and the inadequacies of SOFA. When he inspected the dioxin dump site in Okinawa City, he noted that it carried the same distinct odor as Da Nang Airport’s hot spot. Given Japan’s reputation for technological expertise, Phan was surprised by the low safety standards at the site, such as the lack of warning signs and the absence of tarpaulins to prevent the spread of contaminated dust.

Now Phan worries about what Urasoe’s base-worker survey might uncover.

“When Da Nang airport was enlarged before 2007, the workers didn’t wear protective gear, so they were exposed to dioxin. Prior to working at the site, these men had children born in perfect health. But afterwards, a number of them had children born with cerebral palsy and mental deficiencies,” he said.

Phan’s message for Okinawan authorities is clear: “First they need to prevent the spread of dioxin from the dump site to outside — stop pumping waste water into the river. Then they need to inform the public of the problem. Finally, there needs to be research to check the health of residents in the area — particularly of the children.”

Phan believes Urasoe’s survey is a move in the right direction. But action, he says, must begin at the national level.

Jon Mitchell received the inaugural Foreign Correspondents’ Club of Japan Freedom of the Press Award for Lifetime Achievement for his investigations into U.S. military contamination on Okinawa and other base-related problems. Your comments and ideas:community@japantimes.co.jp