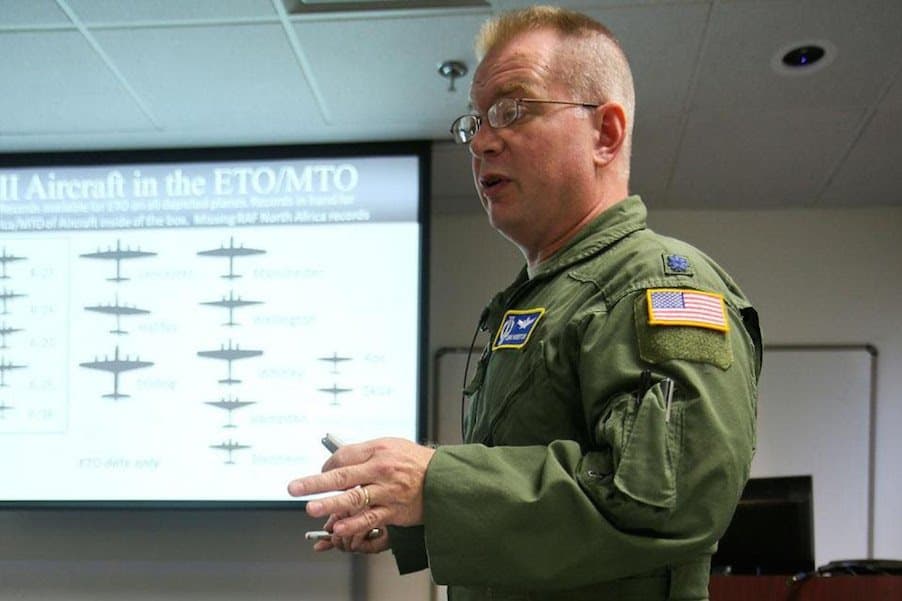 This article originally appeared at the BostonGlobe.com,

MAXWELL AIR FORCE BASE, Ala. — Six years ago it seemed a zany idea when Lieutenant Colonel Jenns Robertson, 45, a bespectacled Minnesota native with an outsized gee-whiz quality even by military standards, began a rather unusual hobby: documenting a century of US air power — bomb by bomb.

Robertson asked: “What if you had the detailed data on when and where every bomb was dropped from an airplane in combat? What would you know?”

The result: a compilation that, at the click of a mouse and a few keystrokes, reveals for the first time the sheer magnitude of destruction inflicted by the US and its allies from the air in the last century.

It has been assigned a military acronym befitting its epic goal: THOR, Theater History of Operations Reports, and was previewed last month at the Air Force Research Institute here. Government experts and private researchers say the data could have far-reaching implications.

It is already aiding efforts to spot unexploded bombs that still endanger civilians and to search for the missing aircraft and their crews of past wars. City planners in countries such as Germany, where new construction requires an assessment of the potential explosive hazards left over from World War II, have also consulted it. As a research tool, the project may even rewrite the history of some famous battles.

“It has proven useful in the real world, in real time,” said Robertson, a space and missile officer by training who was used to crunching large streams of data. He was recently assigned by the Air Force’s chief historian to work full time on his pet project.

The database, he said, has recently been used to investigate civilian deaths in Afghanistan and to judge claims by Iraqi villagers that bombs containing depleted uranium contaminated their water supply.

When plotted on a satellite map, the bombs — from the biplanes of the nascent US Air Service over France in World War I to pilotless drones targeting suspected terrorists in the war in Afghanistan — blanket many thousands of square miles from Europe to Africa, the Middle East and Asia. Even tiny Kiska, Alaska.

“You can pick any place you want and look at it in detail,” Robertson explained, marking the first time the project has been publicly demonstrated.

One particularly relevant example: From October 1965 to May 1975, at least 456,365 cluster bombs were dropped on Vietnam, Laos, and Cambodia, according to the records analyzed. Cluster munitions, designed to release small bomblets, often did not explode on impact and still pose a hazard to villagers.

This kind of information — including which of the 28 types of cluster bombs were used and where — has grabbed the attention of the Department of State’s Office of Weapons Removal and Abatement, which has spent $2 billion in the last two decades helping clean up unexploded bombs and land mines in 80 countries.

“This type of information is critical to our efforts,” said Major General Walter D. Givhan, the deputy assistant secretary of state for political-military affairs. “I was in Vietnam last week looking at old sites and talking with Vietnamese officials on how we can expedite this work. It will really help us to be able to refine what we know about where the strikes were made, where we might find unexploded ordnance, so we can focus our efforts there.”

Another agency taking advantage of the project is the military command searching for clues to the remains of thousands of missing pilots and air crews from past wars.

‘This is an extraordinary project. I have never heard of anything of this magnitude.’

“This collection contains a great trove of information that has greatly accelerated our research,” said Chris McDermott, chief historian of the Joint Prisoner of War/Missing in Action Accounting Command. “Many of the cases where we have success are in far-flung locations with hazy loss circumstances. Each clue that we can compile from the official records could be the key that assists our team to locate a site.’’

For the Korean War Robertson found the detailed mission records for the first 10 months of the three-year conflict but he is still trying to get his hands on the rest. Vietnam bombing data was contained on more than one million records, which he is still in the process of converting. He was also able to get records from US allies, including — to his surprise — strikes by the Chinese Air Force during World War II when it aided the Allied effort.

Bombing reports from more modern conflicts — in the Balkans, Afghanistan, and Iraq — were more readily available and in many cases already in digital form and needed to be converted using special software.

Now all that information can be plotted using modern research and mapping tools. The data, which are unclassified with the exceptions of Iraq and Afghanistan operations, can also be depicted in motion, with particular missions or battles plotted over space and time.

What Robertson didn’t anticipate was how much the database would provide fresh historical perspective.

Unlike land battles, whose outcomes have been well understood by those who were physically engaged with the enemy, the impact of air attacks has historically been far more difficult to discern.

Initial analysis of THOR has raised at least one intriguing possibility in that regard: airstrikes, not tanks, may have been most responsible for the Allied breakthrough against the German Army at El Alemein in Egypt in the fall of 1942, a major turning point in the war against Nazi Germany.

It was one reason the Air Force’s chief historian, Clarence R. “Dick” Anderegg, requested last summer that Robertson should work on the database full time.

“This is an extraordinary project,” said Robert F. Dorr, a historian on air power whose latest book, “Mission to Berlin,’’ details the role of the US Army Air Forces in the defeat of Germany in World War II. “I have never heard of anything of this magnitude.”

“To have something like this available as a reference source when you are trying to determine what happened in a certain country, in a certain era, in the midst of a conflict could be extremely illuminating,” he added.

Robertson’s next objective is to improve the quality control process, both the conversion of the data and each datum itself; some of the raw records, for example, were subject to human error. One example he uncovered: The original mission report for the atomic bomb dropped on the Japanese city of Nagasaki in World War II was off by 552 miles; the latitude had a 9 where a zero should have been.

“Error checking is one of the biggest problems,” said Robertson, who is anxious to have outside historians and database experts independently review THOR when it is complete.

But he has already found at least one novel way to spot check the data.

He then pulled up recent satellite images of the area. Fifty-one bomb craters were still there.