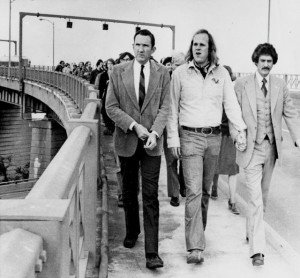 Reflections from Bruce Beyer:
“This is my memory of meeting anti-war POW Col. Edison W. Miller.
On October 20th, 1977 as I waited for a press conference before returning to the US, Gloria Emerson and Cora Weiss introduced me to Col. Edison W. Miller. They introduced Miller saying he had just flown into Buffalo that morning to attend the news conference and walk across the Peace Bridge with me. They introduced him as a former POW. I asked him why he was there and he told me he simply wanted to walk with me.
My memory of the press conference is hazy. I know he spoke and Cora,  along with Gold Star Mothers for Amnesty spokesperson Patricia Simon and attorney Ramsey Clark. A short You Tube video is here:
Anyway we headed out across the Peace Bridge, about fifty vets, my father, co-defendants of the Buffalo Nine trail — the usual rag tag assortment of anti-warriors. I remember being afraid but feeling really amped up, adrenaline pumping and my brain as clear. About halfway across the bridge I found myself between General Clark and Col. Miller.  Ed started telling me about the day he was shot down and bailed out. He had broken his back upon landing and was unable to do much. Shortly thereafter, he was captured by either PRG/NVA (?) soldiers, placed on a stretcher, and carried by two men. As time passed, he came to understand he was being carried up the Ho Chi Minh trail. They eventually reached Hanoi. He was interred for five years, made anti-war statements, and was released. Upon release, he was transported to Hawaii for a physical and debriefing by “military authorities”.
He’s telling me this story as we’re walking towards US Customs holding hands and I’m about to be arrested. He says that the amazing part about the whole story is that when he received his medical discharge, Naval surgeons told him the only reason he was able to walk was due to the medical treatment he received from the day he was captured. Furthermore doctors told him that had he been “rescued”, surgery would have been performed and recovery of full mobility would have been slim.”