The Burns-Novick Documentary: Some Brief First Thoughts on Episode 1 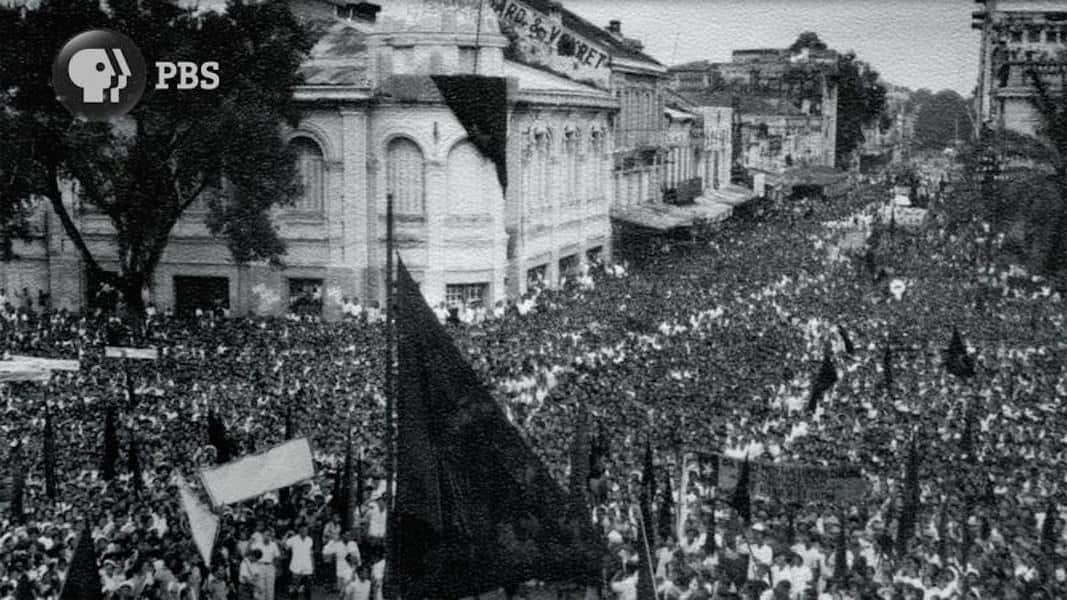 You can’t create a fine home or film documentary on a fatally flawed foundation. This documentary is a key element in the ideological effort begun in 1975 to resurrect the legitimacy of the conflict itself and the US role in the world.

The assertion the US went to Vietnam in “good faith” is one of the great lies of a war built on lies. You don’t have to read Noam Chomsky, Christian Appy, Gareth Porter, Marilyn Young, Gabriel Kolko, Bill Ehrhart, or Michael Uhl to see how bankrupt this assertion is. Just look at the internal documentation of the lies and secrecy in the Pentagon Papers—continued over decades by Democrats and Republicans. We are told that it was a tragedy wrought with misjudgment and errors. As Chomsky has written, however, the US “makes mistakes, but it never commits crimes.” This first episode rest upon a totally flawed foundation that will surely frame the rest of the documentary.

I thought that this episode would be B&N’s best in terms of accuracy/facts. How could they get the black and white story of French invasion, oppression, and heinous brutality wrong, since the evidence is indisputable? But they did. The first thing that hit me was that the scenes of the French colonial invasion was continually interrupted with scenes of US combat and commentaries by US servicemen from 1967-69, even though the focus was supposed to be on the French-Indochinese conflict and resistance led by the Communists and Viet Minh. Why?

We are given a sense that the resistance against the French later turned into a civil war. It was never such thing, as argued by filmmaker and writer Felix Greene. “The struggle in Vietnam was no more a ‘civil war’ than it is a war of aggression from North Vietnam.” When the French occupied Vietnam, some Vietnamese collaborated with them as their agents, but the resistance against the French “was never considered a ‘civil war.’” When the conflict against the French resumed after the Second World War, it was not called a civil war. And when the United States replaced the French, “the nature of the war” did not change. The presence in Vietnam of “a local, U.S. supported, U.S. supplied, U.S. financed, U.S. armed regime cannot obscure the central fact that the main object of the liberation struggle … has been the removal of foreign military force.”

Who would make a documentary about what happened in France during that period and give the greatest amount of air time to the daughter of a French Vichy collaborator—as we found with Duong Van Mai Elliott throughout this episode. We are led to sympathize with her and her family, rather than the Vietnamese who were exiled, imprisoned, and killed by the French–with whom her father worked.

We all grew up with powerful French and US films about the brave resistance fighters who went after the Nazis and the Vichy (one of my favorites is “The Train” with Burt Lancaster), and no one argues that it was a civil war. Where was concern and outrage in this country at the end of the war when the French resistance executed thousands of Nazi collaborators—we heard no moaning and whining about atrocities and terror. There was then no balance then between the sides in that Second World War conflict, and is no balance between the Vietnamese resisters led by Ho and the French and their Vietnamese collaborators—though that’s intimated in this episode with comments on Viet Minh/Communist terror.

Regarding Vietnam’s declared independence: It did not last long, however, as immediately after the end of the Second World War, U.S. material support for French colonialism grew dramatically. It desperately needed American troopships and other military equipment to transport its colonial troops to Vietnam.  Harold Issacs, a war reporter for Newsweek, was in Saigon as these troops came off American ships: there were “thousands every week, first in French transports and then in a long succession of American ships, flying the American flag and manned by American crews…. They marched past cheering crowds of relieved French civilians and moved out … to restore French order.”

Merchant Mariners from the U.S.S. Stamford Victory were among the few Americans to see the sight of “fully armed Japanese soldiers, several weeks after [Victory over Japan] Day, being employed by the British in Vietnam.” The crews of this and other U.S. ships witnessed the Vietnamese reaction. One reported that they “all spoke to us of their hatred of the French and their wonder at the Americans [for] bringing the French invaders back.” These members of the National Maritime Union (NMU) protested “the policy of the United States Government in chartering ships, flying the American flag,” to transport French troops “in order to subjugate the native population of Vietnam.” In a stunning shift in history, U.S. vessels brought French troops to Vietnam so they could join recently released Japanese troops—who had been recently killing Americans in Southeast Asia—to support France’s attempt to crush the Vietnamese independence movement. The Mariners’ action was the first organized antiwar protest against Washington’s policy, twenty years before campus protests began in 1965. Included among these French troops brought back to Vietnam—and not mentioned in the episode—were French Legionnaires, who included former members of the German SS.

There is no historical context given for the movement of 900,000 refugees (some half were Catholics) from northern Vietnam to southern Vietnam after the 1954 Geneva Conference, nor any similar context given about the election that was scheduled for 1956, one that everyone knew—including Eisenhower—Ho Chi Minh would win easily. We are led again to sympathize with these refugees without knowing anything about who they were. Former CIA and White House Indochina specialist Chester Cooper states: “Data subsequently available tend to support the late [historian and journalist Bernard Fall] that “… the mass flight was admittedly the result of an external, intense, well-conducted and … very successful American psychological warfare operation.”

There is no discussion of the role of the CIA led by Col. Edward Lansdale in helping to orchestrate the movement of these refugees to southern Vietnam, or that some had been organized into militias fighting with the French, led by their priests. Why the liberal bleeding-heart concern for refugees who had supported the Vichy counterpart in Vietnam?

The words “US invasion” of Vietnam after the Geneva Agreements are nowhere to be found in this episode—and I assume will not appear in the series. The US simply set up the “nationalist” Diem who is alleged to have “loathed” the French. But this nationalist “loathing” did not stop him from being a Vichy collaborator who worked for the French administration.

A final thought. The reactionary pundit George Will calls the series “a masterpiece.” Need I say more?