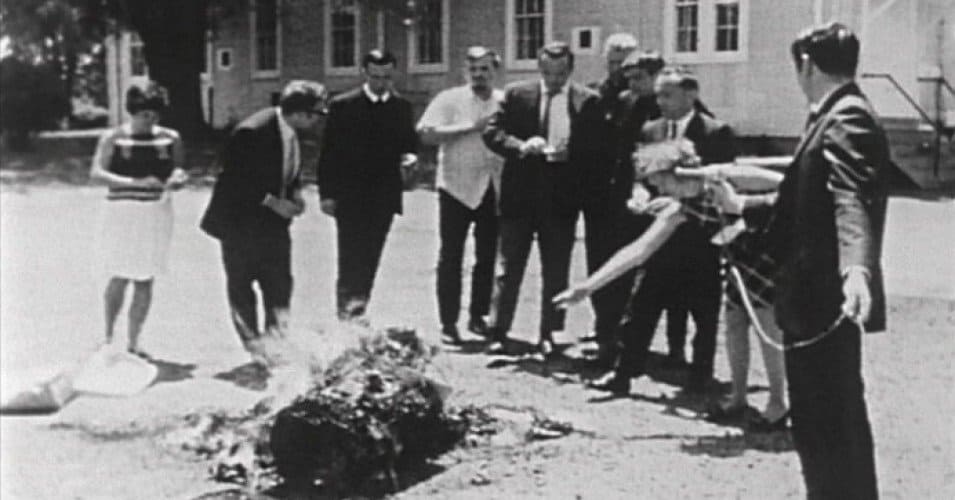 This article was originally published on Common Dreams on Sunday, May 6, 2018.

Fifty years after they set hundreds of draft files ablaze to protest the Vietnam War, the “Catonsville Nine” were honored with a historical marker in the Maryland community.

The state sign, unveiled Saturday, recognizes the pivotal role of their action. Indeed, Joby Taylor, director of the Shriver Peaceworker Program at the University of Maryland, Baltimore County, called it “one of the most significant acts of war resistance in our nation’s history.” The sign reads:

On May 17, 1968, nine Catholic activists raided the Selective Service Office in Catonsville and burned several hundred draft files to protest the Vietnam War. In a highly-publicized trail, the “nine,” who included priests Daniel and Philip Berrigan, were convicted and sentenced to prison. The Catonsville action played an important role in the antiwar movement, inspiring similar acts of civil disobedience across the country.

The marker sits just across the street from the site where the Berrigans, along with Brother David Darst, John Hogan, Tom Lewis, Marjorie Melville, Thomas Melville, George Mische, and Mary Moylan took the 378 draft files, put them into wire trash bins, and carried them outside where they set them ablaze with homemade napalm.

“Our apologies, good friends, for the fracture of good order, the burning of paper instead of children, the angering of the orderlies in the front parlor of the charnel house. We could not, so help us God, do otherwise,” Father Dan Berrigan, who died in 2016, said at the time.

As the draft documents turned to ashes, “we prayed for peace and waited for the police,” Mische would later write.

Marjorie Melville was at the commemoration event on Saturday, and recalled to the Baltimore Sun, “I personally put a match on [the draft files].” She and Mische are the only remaining survivors of the nine.

The new sign was erected on the grounds of the Catonsville Public Library. That’s because, according to organizers, the Knights of Columbus, where the Selective Service files were housed, did not want the marker there, the Sun reported.

Other events commemorating the 50th anniversary are continuing this month.

This work is licensed under a Creative Commons Attribution-Share Alike 3.0 License