A Conscientious Objector in a War Zone 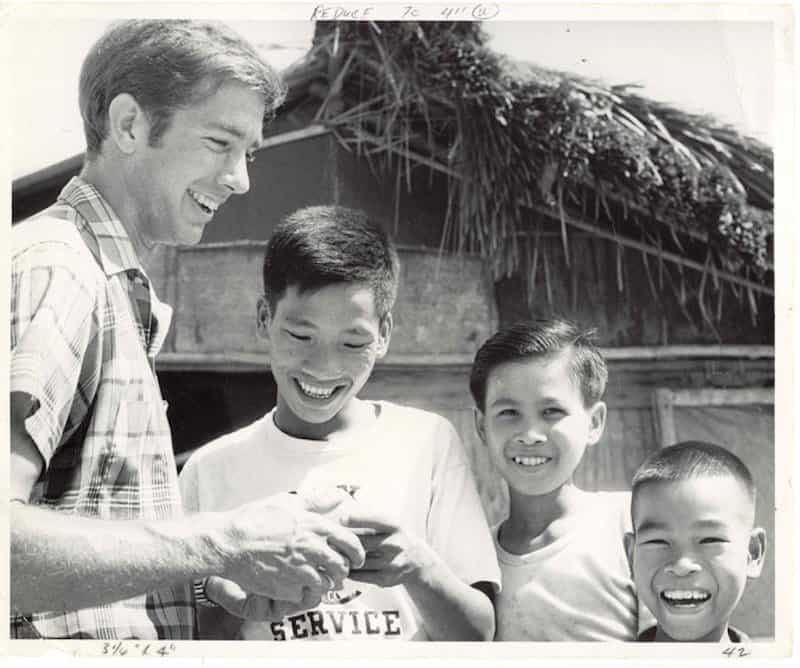 Mennonites have refused to participate in war for almost 500 years. I grew up in a small Mennonite community in the Shenandoah Valley of Virginia, where Mennonites have been refusing conscription since the Civil War. Being a conscientious objector to the Vietnam War was an easy choice for me.

The more difficult decision, though, was where to perform my civilian alternative service. Like 170,000 other young men during the war, I was still required to serve my country. Many worked in hospitals or schools. In 1966, I chose the Mennonite Central Committee in Tam Ky, South Vietnam, in the middle of the war zone.

Tam Ky is the capital of Quang Nam Province, a small town about nine miles north of what was then the huge American military base in Chu Lai. The town and the base were in the northern part of the country, in what was known as I Corps, the most fought-over military sector of Vietnam.

Working in Tam Ky, where I taught English to Vietnamese high school students while organizing literacy classes for refugee children, gave me a surprisingly intimate look at the war, one that challenged my preconceived ideas about both Americans and Vietnamese. Growing up in a small community where everyone I knew was Mennonite, I had expected that American soldiers in Vietnam would be mean, like the playground bullies occasionally found in even Mennonite communities. I was surprised to discover that the soldiers I met in Vietnam in the 1960s were nice, often kind people (in fact, despite the military’s manpower demands, applicants with antisocial history or criminal records were actually prohibited from serving). I was also surprised by how many G.I.s were black, or had Southern accents.

Later, when I grew to know some of the Vietnamese who were fighting the Americans, I was similarly surprised to learn that they also were good, often kind people. How could it be that nice young men from good homes in the United States and Vietnam were killing each other in this war?

Good people will kill other good people if they fear them and are convinced that the enemy is absolutely evil. The demonization of the enemy is often done through stereotypes. The American troops were known to the Vietnamese as the “imperialists,” and everyone understood that imperialists are foreigners from wealthy countries who steal the resources of weaker nations, take their men as puppet soldiers and their women as concubines. One should not talk to or reason with an imperialist; the only thing that imperialists understand is the power of the gun.

On the other side, the Vietnamese National Liberation Front fighters were known to the G.I.s as VC — for Viet Cong, shorthand for “Communist traitors to Vietnam” — and every American understood that Communists destroy religion and family. One cannot talk to or reason with a Communist; the only thing that Communists understand is military might.

I was the first Mennonite sent to Tam Ky in late 1966, when the area was already flooded with refugees from fighting nearby. When I arrived I was briefed by a local C.I.A. official, who informed me that Tam Ky was safe, most of the time. The United States controlled the territory for almost a mile east and west of the town. Route 1, which passed through the center, was also under military control north and south of Tam Ky during the daylight hours, though at sundown it reverted to VC control.

The official went into explicit detail about the various tortures that the VC would use on me if they were to catch me. As the VC did venture into Tam Ky for a few hours in the middle of the night every few months, he strongly recommended that I stay in the United States Agency for International Development compound, which was surrounded by a high wall, protected by land mines and concertina wire and guarded 24 hours a day.

After a few nights in the U.S.A.I.D. compound, I realized that as a Mennonite who had come to help Vietnamese, I could not live in an armed compound from which all Vietnamese, except for prostitutes, were expelled at sundown and the Americans inside were not allowed to go out after dusk. I was soon joined by another pacifist, and we found a small bungalow across the street from the Catholic high school, where we taught English.

The old Vietnamese woman who rented us the bungalow explained, “There is only a four-foot wall around the yard, but if you get a good steel gate, a few rolls of concertina for the top of the wall and a .50-caliber machine gun for the front yard, when the VC come into town you will be able to hold them off until the Marines come to rescue you.” I explained to our landlord that as pacifists, we refuse all weapons or even walls for protection. We never got the barbed wire or even a gate for the four-foot wall. Our defense was that we had no weapons, and no way to defend ourselves. We welcomed everyone into our house, but all weapons were strictly prohibited.

People often kill to protect themselves. When the threat from the other is removed, everyone relaxes, and it becomes possible to get to know each other and even become friends. During the three years I worked in Vietnam, the N.L.F. came into Tam Ky about a dozen times. Each time they attacked the three heavily armed compounds where Americans lived: U.S.A.I.D., C.I.A. and MACV (Military Assistance Command, Vietnam). Our little bungalow, the only unguarded place where Americans lived in Tam Ky, was never harmed.

American troops had arrived in Quang Nam Province before I did, and Tam Ky was already teeming with refugees by the time I got there. My assignment was to find out what the refugees needed and offer them assistance.

The program in the refugee camps started small, working out of borrowed buildings on weekends and summer vacations. We carefully chose literacy texts free of propaganda for either side. The Mennonite Central Committee donated the books, notebooks and pencils, while the high school students volunteered as teachers. The program grew and soon villages near Tam Ky asked us to take classes to their communities as well. Our requirement was that any village that wanted a literacy class in their community had to provide a classroom and room and board for the high school student who would come to teach their children.

Many of the nearby villages were known locally as xoi dau villages. “Xoi dau” is Vietnamese for “sticky rice and beans,” slang for Saigon government control by day and the N.L.F. by night. I’ll never forget one xoi dau village chief who urgently requested a literacy class in his village. I scoured the high schools in Tam Ky but could find no new volunteers to teach the class. The village chief was desperate: “I will protect any teacher who comes to my village and guarantee that he or she will not be inducted into either army. We need teachers more than we need soldiers.”

After finishing my three-year commitment in 1969, I returned to the United States, went to graduate school, married and moved on with my life. Six years ago, Nguyen Van Muoi, one of the high school students with whom I had worked closely in our literacy program in Tam Ky, immigrated to the United States and got in touch with me.

Muoi had finished college and married during the war and was back in Tam Ky as a high school teacher in 1975 when the war ended. He had so many stories to tell, but the most astonishing revelation to me was to learn that one of my best friends, a local artist named Le Dinh Sung, had an older brother that we had never known about — a brother who was a high level official on the other side. When the new government was installed in Quang Nam Province, Sung’s brother was named as a high-level official, and the new chief for education in Tam Ky was none other than my artist friend, Le Dinh Sung.

Love and truth are powerful forces, which enable relationships that can transcend nationality, race and ideology, bringing enemies together as friends.