Craig McNamara reflects on being son of Vietnam War architect 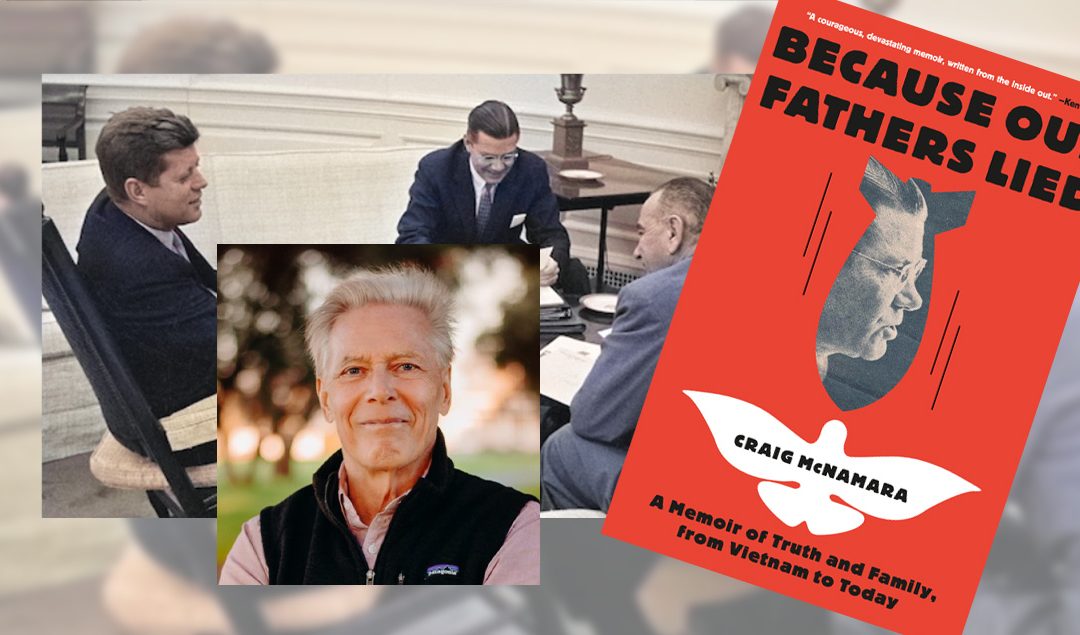 In his 1995 memoir, “In Retrospect,” former Defense Secretary Robert McNamara wrote that the decisions he and others made about the war in Vietnam were wrong. Now, his son, Craig McNamara, has published a memoir of his own.

“Because Our Fathers Lied: A Memoir of Truth and Family, from Vietnam to Today” reckons with the toll of those decisions and the responsibility of those who made them.

Robert McNamara died in 2009 at 93 without apologizing to the American people or to his son, who grew to oppose the war and spent the 1970s living with Indigenous peoples around the world. Craig McNamara now owns a walnut farm in Northern California.

Craig McNamara gives his father credit for, unlike other leaders, acknowledging the mistakes he made in the war, but doesn’t think he went far enough.

“What I wish that my father had been able to do is just to listen,” Craig McNamara says. “I know it affected him. I know he took Vietnam to his grave. And I only wish that he could have done something to heal our nation and the families who lost so much.”

At age 16, in the mid-1960s, Craig McNamara attended a teach-in against the war at boarding school. Still formulating his own opinion, he called his father to ask for materials that supported the war effort.

“There was a quiet pause on the phone and my father said, ‘Well, Craigy, I’ll make sure that my secretary gets that information to you,’ ” he says. “Nothing arrived in my mailbox. And it was the beginning of my resistance to the war.”

“My father, Robert McNamara, was an amazing man. Together with my mom, [they] were amazing parents. They introduced my two sisters and myself to the world of nature. He loved the wilderness. This thoughtful, caring individual who made very, very significant errors. … My question for my father is, Dad, please do your best to correct those errors. You cannot correct them. But you could say to those people who lost their fathers and sons, ‘I’m sorry, and I want to go beyond that. I would like to do something for the atrocities that we, the United States, under my leadership, committed in Vietnam.’

“To have him come home from an 18-hour day when I was 12 or 13 years old. And I could hear him come through the doors and I would run down the steps and embrace him and get a big kiss. And he’d want to know about what I was doing, of course, because he couldn’t and refused to talk about his life. I get that. But as a father today of three, what we do is we try to tell the truth. And my father simply could not do that. I think he thought he was a master at compartmentalizing the Vietnam War. You can’t do that. It only works for so many years. And then it bleeds out.”

“I’ve struggled with that. I’ve struggled with that my entire life. And I realize that we are not our father’s keepers. I surround myself with love, community, purpose, and I think that one of the things that I would like to share with readers is that if our families experienced generational trauma, we have the opportunity to change that in our lives.

“Doing my memoir … is a journey backward that takes us forward. It’s just powerful. We were all wounded. And let me just say, during the war, we dropped 388,000 tons of napalm on the Vietnamese countryside and 7.5 million tons of bombs. That was three times the amount that was used in World War II. And those that didn’t explode are still in the rice paddies. And I’ve been working with Project Renew, an amazing project in Vietnam to try to dislodge those unexploded bombs.”

“I was so moved in listening to the interview that [host Robin Young] had with Russ Miller, whose brother, Jeffrey Miller, was one of the Kent State young people … who was killed. Their father thought that the protesters were bums.

“I had the opportunity to meet with Gen. [Vo Nguyen Giap’s] son in Hanoi. It was [Vo Hong] Nam’s father … and my father who were leading this horrific situation. And here we are, two sons. The rose plants that his father so loved, the trellises of those rose plants were made out of bomb casings that we, our Air Force, had dropped on Hanoi.”

On asking Robert McNamara why he lied

“When my father wrote ‘In Retrospect,’ I asked, ‘Dad, why? Why couldn’t you have said this earlier? Why couldn’t you have done this to free yourself and eventually free all of us people who have been impacted?’ And he said loyalty. I want to quote you something just after my father either was fired or resigned from LBJ’s cabinet. ‘Around Washington, there is this concept of the higher loyalty. I think it’s a heretical concept, this idea that there’s a duty to serve the nation above the duty to serve the president. It will destroy democracy if it’s followed. You have to subordinate a part of yourself, a part of your views.’ And in all due respect, I completely disagree. When he took the oath of office, it’s ‘I do solemnly swear that I will support and defend the Constitution of the United States.’ It doesn’t say anything about the presidency. To whom do we have loyalty? Ultimately, I hope to society and that’s what’s so complex here, because he wanted the best for humanity. And yet he made decisions that continued the war in Vietnam.”