David Lamb, Author and War Correspondent in Vietnam, Dies at 76

This article originally appeared at the NYTimes.com 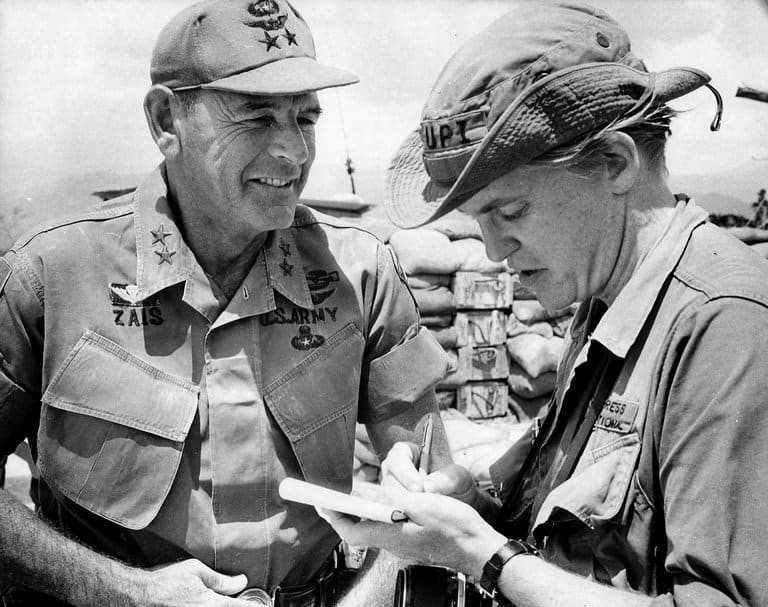 David Lamb, a dauntless foreign correspondent for The Los Angeles Times who also wrote critically acclaimed books about the Arab world and Africa, died on Sunday in Alexandria, Va. He was 76.

Sandy Northrop, his wife and only immediate survivor, said the cause was lymphoma and esophageal cancer.

Mr. Lamb covered the front lines in Vietnam for United Press International and the fall of Saigon for The Times in 1975. Xan Smiley, a top editor at The Economist, characterized him as “inexhaustibly gutsy.”

Mr. Lamb was credited with naming the site of a 10-day battle in the A Shau Valley in 1969 “Hamburger Hill.” A young G.I. had told him, “With all this chopped-up red meat, it reminds me of a hamburger,” and the name stuck.

He returned to Vietnam in 1997 to open the newspaper’s bureau in Hanoi.

Mr. Lamb often embellished his books and articles with personal experience. Discovering once that his taxi driver had fought for the North Vietnamese, Mr. Lamb asked whether the cabby hated him because he was an American.

He cobbled together observations like those into a 2002 book, “Vietnam, Now: A Reporter Returns,” and a PBS documentary, “Vietnam Passage: Journeys From War to Peace,” the same year.

Mr. Lamb also wrote two domestic travelogues. For one, “Stolen Season: A Journey Through America and Baseball’s Minor Leagues” (1991), he attended minor league games all over the country. For the other, “Over the Hills: A Midlife Escape Across America by Bicycle” (1996), he bicycled 3,145 miles from his home in Washington to Santa Monica, Calif., armed, he said, with two bottles of Scotch, a carton of cigarettes and an ample supply of ibuprofen.

In “The Arabs” (1987), a portrait of a region and a people he came to know as a reporter, Mr. Lamb produced a compelling primer peppered with illuminating anecdotes. One passage revealed that King Fahd of Saudi Arabia had recruited the designer of a floating space city in “Star Trek” to refurbish his Boeing 747 with gold-plated hardware and a three-story elevator.

“Mr. Lamb has the first-rate reporter’s essential tools — his eyes and his ears,” James F. Clarity, a correspondent for The New York Times, wrote about “The Arabs” in The Times Book Review, “and he uses them to relate, sometimes with compelling detail, who the Arabs are, why they act the way they do and why the rest of the world, particularly the United States, has a stake in what they do that goes beyond oil prices.”

Mr. Lamb wrote his first book, “The Africans” (1983), after logging 300,000 miles through 48 countries during four years of covering the continent.

He quoted James Richard Mancham, the first president of the Seychelles, as saying: “Look at it this way, I’m alive. That’s more than a lot of ex-presidents in Africa can say. Besides that, everyone had fun when I was president, and how many ex-presidents can say that?”

David Sherman Lamb was born on March 5, 1940, in Boston, the son of Ernest Lamb, a private investment manager, and the former Pauline Ayers. He began his career at 14, after writing to The Milwaukee Journal and volunteering to contribute a weekly column about his beloved Braves from the perspective of a teenager who had seen the team desert Boston for Milwaukee. The Journal’s sports editor agreed, and David’s father rented him a typewriter for $9 a month.

He graduated from the School of Journalism at the University of Maine in 1962 and began his career on The Okinawa Morning Star. He worked in Las Vegas and Oakland, Calif.; reported for U.P.I. in San Francisco, Denver and Saigon; and was assigned to New York and Washington by The Los Angeles Times.

He served as bureau chief in Cairo, Nairobi, Sydney and Hanoi before he left the paper in 2004 after 34 years. A world map in his office was stuck with 185 pins, one for each country he visited as a correspondent.

During an unpaid leave from The Times, Mr. Lamb bought a used mobile home and spent a summer wandering the country for what became “Stolen Season.”

“This baseball journey was born in the rubble of Beirut while some maniacs were blowing away my hotel with tanks, chunk by chunk,” he wrote. He said he told a colleague that if he survived, “I’m going to find something to write about that’s a million miles from Beirut. Like baseball.”