Decades on, millions of unexploded American bombs left behind still kill and maim in Laos 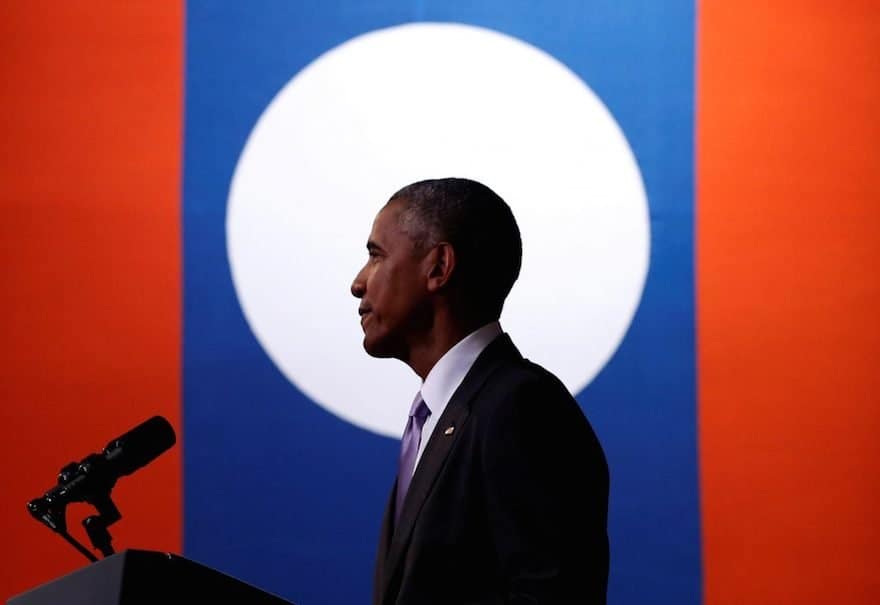 This article originally appeared  at pbs.org

The United States dropped 270 million bombs on Laos between 1964 and 1973. On Tuesday, President Obama became the first U.S. president to visit the country, promising to provide the Laotian people to remove the unexploded bombs that remain. Special correspondent Mike Cerre offers a glimpse of life in Laos today and the mission to end the deadly legacy of the Vietnam War.

JUDY WOODRUFF: As we reported earlier, President Obama is now in Laos, the small Southeast Asian nation where the United States dropped millions of tons of bombs during the Vietnam War.

We stated at the top of the program that Mr. Obama apologized, but he stopped short of a formal diplomatic apology expressing regret.

In a speech this morning, Mr. Obama said the U.S. would now increase funding to help clear the bombs that still maim and kill.

PRESIDENT BARACK OBAMA: Many of the bombs that were dropped were never exploded. Over the years, thousands of Laotians have been killed or injured, farmers tending their fields, children playing.

The wounds, a missing leg or arm, last a lifetime. And that’s why, as president, I have dramatically increased our funding to help remove these unexploded bombs. As a result, Laos is clearing more bombs, fewer Laotians are being hurt or killed, and, together, we are saving lives.

Given our history here, I believe that the United States has a moral obligation to help Laos heal.

JUDY WOODRUFF: Now special correspondent Mike Cerre reports from Laos on the American effort to clean up this deadly legacy.

MIKE CERRE: A Lao grandfather who lost his left hand in 1964 to a UXO, unexploded ordnance, pointing out injuries to his three grandsons from a UXO from the same war.

WOMAN: Two of the fingers were cut off.

MIKE CERRE: The war may have ended here in Laos 40-plus years ago, but the casualties of war continue on places like this soccer field, where some kids just two weeks ago found a little bomblet. They thought it was a ball and took it home to play with.

Despite official U.S. government denials and downplaying during the Vietnam War from 1964 to ’73, the United States dropped more bombs per person on Laos than have been dropped on any country in the world in any war.

The U.S. Defense Department estimates as much as two million tons of ordnance were dropped on Laos, much of it focused on the Ho Chi Minh Trail that paralleled the Vietnamese border. The North Vietnamese used the trail network to transport troops and supplies into South Vietnam, where American troops were fighting.

It was part of the secret war conducted in Laos, which remained secret until one determined American aid worker made it public.

MAN: There is a good deal of evidence to suggest that the United States has been carrying out the most protracted bombing of civilian targets in history in Laos.

MIKE CERRE: While working in Laos as an educational adviser in 1969, Fred Branfman was struck by the number of refugees fleeing the countryside into the capital, Vientiane, at the height of the secret war.

FRED BRANFMAN, Author and Anti-War Activist: I estimated at one point that I had interviewed over 2,000 Laotians. Every single one, every single one, without exception, said that his or her village had been destroyed by bombing.

MIKE CERRE: He also asked the refugees to draw pictures of the bombing, which he used in his testimony.

CHANNAPHA KHAMVONGSA, Legacies of War: So these were accounts of people who actually lived under the air war. And at this point, nobody outside of Laos had known what was happening.

MIKE CERRE: Channapha Khamvongsa is a Laos American who left Laos in 1979 with her family when she was 7 and was raised in Virginia. She left her job at the Ford Foundation 12 years ago, after she first saw the refugees’ drawings, to start a foundation of her own to deal with these dangerous legacies of the war. More than 20,000 people have been killed or maimed since the war’s end.

CHANNAPHA KHAMVONGSA: What I realized as I got older is that America left behind such a dark legacy here. I felt compelled to do what I can to help remove the millions of bombs that are still left over from the war.

MIKE CERRE: According to the Defense Department’s estimates, 20 to 30 percent of the bombs dropped over Laos didn’t go off as designed, whether that be for a technical malfunction or having fallen into a soft rice paddy. Either way, 25 percent of the country now is still contaminated by UXOs.

CHANNAPHA KHAMVONGSA: Since 1973, there have been four deaths here. This particular field is going to be used for agriculture purposes, to grow fruit trees. But he came across too many bombies. And so he made a request to UXO Lao to clear the land. The last two days that they have worked here, they have been 42 bombies found already.

MIKE CERRE: Bombies are the baseball-size explosives packed by the hundreds into larger cluster bombs designed to open in midair, raining the smaller anti-personnel bombs filled with ball bearings and other shrapnel over wide swathes of land.

CHANNAPHA KHAMVONGSA: About 270 million were originally dropped of the cluster munitions. And an estimate of 80 million still remain on the land. Obviously, we still have a lot more to go. But for the villagers here, it’s so important that their land gets cleared.

MIKE CERRE: UXO Lao is one of several ordnance removal operations that receive U.S. funding to find and safely remove UXOs throughout the country.

CHANNAPHA KHAMVONGSA: I think one of the challenges to clearing the Ho Chi Minh Trail has just been, again, awareness and attention. There has been clearance over the last 15 years. But we just need more resources.

MIKE CERRE: Daniel Clune, the U.S. ambassador to Laos, believes the improvement of UXO clearance protocols is one the reasons the U.S. will be spending more on remediation efforts here.

DANIEL CLUNE, U.S. Ambassador to Laos: The substantial increase that the president has announced for UXO clearance in Laos from roughly $15 million a year to $30 million a year, a doubling, is very significant.

MIKE CERRE: Have we ever paid reparations for the bombing that we conducted here?

DANIEL CLUNE: We have a responsibility to clear the unexploded ordnance that we left here during the war. And this is not to make a judgment one way or the other about what happened here and who was at fault and who wasn’t at fault.

It’s simply a question of young children being injured or killed as the result of ordnance that was dropped here in a war that happened 40 years ago.

CHANNAPHA KHAMVONGSA: I mean, President Obama being here is historic, and it’s the first a U.S. president to visit here. And so we’re, I think, elated that he’s going to bring greater visibility to this issue. We’re hardly done. Even a doubling is not going to solve this problem overnight.

And it’s going to take the next administration and maybe even the next, the one after, to really address this issue.

MIKE CERRE: All agree that no amount of money, resources or time could ever find every unexploded bomb in Laos. Ordnance from both World Wars is still being found in Europe.

The primary objective here is to make Laos safe by focusing UXO efforts on areas of known contamination in the more populated areas and educating Laos on what to look for and who to call when they find something.

EMMA ATKINSON, U.S. State Department: Right now, we have got about 85 percent of our funding that goes to surveying clearance activities, with the remainder 15 percent being split between survivors assistance and risk education.

MIKE CERRE: Channapha’s Washington based Legacies of War Foundation, funded largely by other Lao-Americans, helps the State Department identify the local needs and the mix of local and mostly international organizations working on them, from victims assistance, to counseling and job training.

CHANNAPHA KHAMVONGSA: I think the Americans obviously knew a lot about Vietnam and Cambodia. Some might have heard about Laos, but I don’t think they know about the history of U.S. involvement here, and in particular about the secret war. I think very few are aware that millions of bombs are still maiming and killing Laotians today.

And that’s what we’re really concerned about.

MIKE CERRE: Another group is using soccer to teach local kids how to identify UXOs, especially the small bomblets, which can be easily confused with the balls they can play with, as this third generation of UXO victims mistakenly did, with tragic consequences.

CHANNAPHA KHAMVONGSA: As long as the U.S. continues to remain committed by sustaining and increase its funding as needed, I think we will be able to address this issue hopefully in our lifetime.