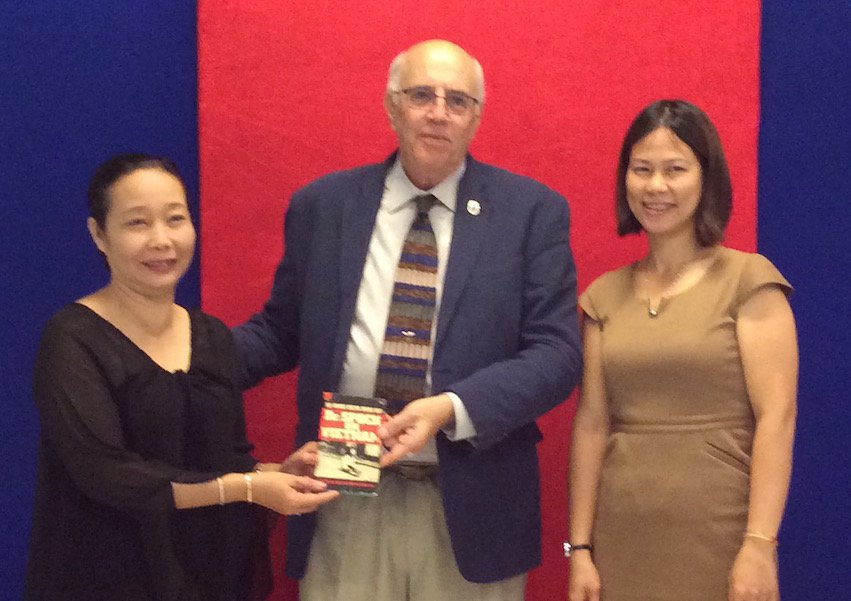 In the early 1970’s with the war still raging, Dr. Spock visited Hanoi as a guest of Pham Van Dong, who succeeded Ho Chi Minh as president of the Democratic Republic of Vietnam. In this photo President Dong is showing Dr. Spock that his book Dr. Spock on Vietnam was on Ho Chi Minh’s desk the day he died. It remains there today.

On October 26, I visited the War Remnants Museum in Ho Chi Minh City for the second time. I came as a visitor two and a half weeks before on my first day in Vietnam. This is one of the two most visited museums in Vietnam with almost one million visitors each year.

I came back  to meet Director Huynh Ngoc Van and give her a copy of Dr. Spock on Vietnam and this photo of Spock to display in the section of the museum dedicated to international support of the Vietnamese people’s struggle for national liberation. Ms Van is on the left. Her assistant is on the right.

DON’T KNOW MUCH ABOUT HISTORY?  Did you know that the United States provided the bulk of the funds for the eight-year French war against Vietnam from 1946 to 1954?

That we had elections canceled because, as President Eisenhower wrote in his memoir, possibly 80 percent of the Vietnamese people would have voted for Ho Chi Minh. And we plucked the aristocrat Ngo Dinh Diem from his home in Westchester County New York as our choice to lead South Vietnam. And America funded both his army and his state operations. Hardly a “civil war.”

I’ve written about our war’s continuing impact on people in Vietnam (in addition to what a vibrant and beautiful place Vietnam is today).  Perhaps some of you would like to read a few pages of history to learn about how and why the U.S. got into Vietnam, what started the war, why the Vietnamese supported the Viet Cong (National Liberation Front), and about the destruction our nation wrought (all in 48 short pages).

How did this book come to be written and published?  Mitchell  Zimmerman, my best friend from the SNCC days and I were frustrated by our government’s success in duping the American public into believing that we were justified in waging war on the Vietnamese people.

Late one night in 1967 at the Hungarian Pastry Shop (111 th and Amsterdam in NYC) Mitchell and I kicked around the idea of writing the true story. Mitchell researched the war and prepared some draft chapters. We wanted a book that was not academic, was easy to read, but not patronizing. And we hoped to get someone credible and trusted by the American people to sign on as co-author.

Spock was our first choice.His book Baby and Child Care was a perennial best seller, next only to the Bible. Mitchell contacted Dr. Spock out of the blue (he hadn’t known Spock before), met with the good doctor and persuaded him to do the book.

Mitchell did the research and wrote the first drafts—and then (Mitchell tells me) Ben’s line-by-line editing made Dr. Spock on Vietnam the clear, calm, succinct and easy to read book that it is. You can read it for free, courtesy of the Google Books Project, and later this week you’ll be able to download a free copy.  (Thus, by waiting until now, you can get a 75 cent value for nothing!)

Much of the book was about ending the war and may not be of current interest, but several short chapters recount the history referred to above. Use this link . . .https://books.google.com/booksid=LP1AAAAAIAAJ&printsec=frontcover#v=onepage&q&f=false

What a day! So what’s next? The War Remnants Museum’s director has asked for help in putting together an exhibit on the American GI Anti-War movement of the 1960’s and 70’s. I think I know some folks back home who can help me with that.