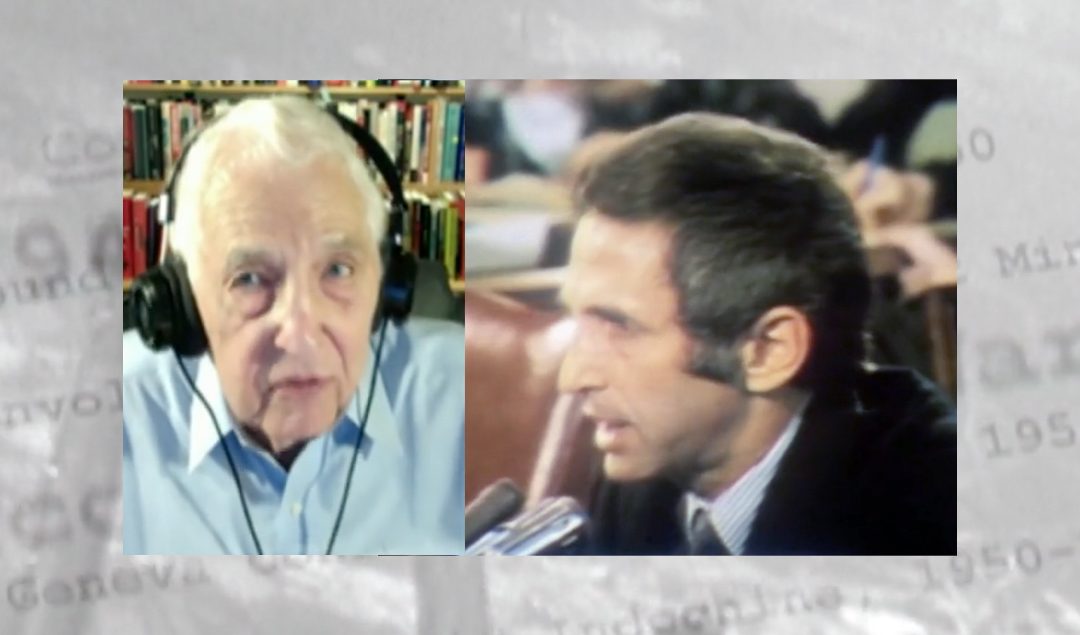 Fifty years ago this week, The New York Times began publishing excerpts of the Pentagon Papers — 7,000 pages of top-secret documents outlining the Pentagon’s secret history of U.S. involvement in Vietnam since the 1940s. The leak exposed years of government lies about the war, revealed that even top officials believed it was unwinnable, and would end up helping to end the Vietnam War and lead to a major victory for press freedom. The Times exposé was based on documents secretly photocopied by Daniel Ellsberg and Anthony Russo, who both worked as Pentagon consultants at the RAND Corporation. Ellsberg, who had been deeply involved in the Vietnam War as a defense analyst, decided to risk life imprisonment to reveal the truth about Vietnam. “I’d been lied to. The whole country had been lied to. The Congress had been lied to as to what the situation was,” Ellsberg says. He says top officials knew for years that the war had “very little likelihood of helping anyone, but leading just to an escalating stalemate.”

“The first trip I made to Vietnam … was actually in 1961 on a research project looking at limited war research and development. And it was clear in one week there, talking to counterpart military officers who were advising Vietnamese and who were looking at the war closely, and reading their reports, that it became very clear that the war, under a corrupt, tyrannical dictator, Ngo Dinh Diem, who had a pretense of elections, in which he tended to win 102% of the voters in some districts, was failing, against a group that was led by communists who had evicted the French from the northern part of the country some years earlier and had that cachet of liberators of the country from occupation. And we had — the U.S. had artificially carved out a part of that country as an anti-communist country, which we supported very lavishly — as if, for example, Britain had supported the Confederacy very lavishly in our Civil War — and, in fact, had supplied all of their uniforms, their bullets, their rations, everything, which is what we did for the puppet army in South Vietnam. It was very clear then that that was an extremely unpromising place to plant the flag against communism or for imperialism in that country, as imprudent as it had been for the French to try to reconquer that country. And we had supported the French from ’45 on, ’til ’54, and then took over the burden of suppressing that country and effectively occupying it ourselves.

So, I was very surprised in ’61 when I learned that President Kennedy had taken the alleged advice of the chairman of the Joint Chiefs of Staff, Maxwell Taylor, and Walt Rostow, a major policy figure, that all that was needed was advisers, that he didn’t need to send combat troops, and that progress would be made if we simply went through the Geneva Conference of 1954 ceiling of advisers to about 600, went up to a thousand and maybe several thousand — in the end, there were 12,000 advisers there — but that that was enough to keep that country in our control, essentially.

That turned out to be a lie. When I read the Pentagon Papers years later — that was in ’61. I was reading those documents in ’67, and I was particularly interested to see what their advice had actually been. And what had turned out was that the president had been lying and that their — and they backed him up, in line — and that their advice actually was that advisers would not be enough to stem the nationalist forces we were fighting and that the only possibility was to send troops immediately, and, indeed, that those didn’t have a lot of promise that we would do better than the French, but nothing less would do the job. In other words, I had been lied to, the whole country had been lied to, the Congress had been lied to, as to what the situation was.

Well, that was typical of the entire 30-year conflict, which was really from 1945 to ’75. The recent Burns-Novick piece, the series about the war, starts with a statement: “It was begun by decent men with honest motives.” That was not true for a single day of that war. However decent they may have been in other contexts, these smart men, generally, as smart as we have today, managed to lie to the public every day of the war and, in bad faith, actually, pursue a war that they saw had very little likelihood of helping anyone, but leading just to an escalating stalemate — which is what actually happened — for the next 20 years of the war or so, from — 15 years, from ’61 to ’75.

So, when I became aware that that was repeating itself, that history, which in the Pentagon Papers and in ’68, with President Johnson’s departure — and now we were in ’69, and I was made aware that President Nixon was following exactly in the footsteps of his predecessors, while telling the public, in his election campaign and otherwise, he was getting out. And, in fact, he planned to get the U.S. troops out — U.S. troops out — slowly, throughout his first term, hopefully sooner, but, if necessary, as it turned out to be, over a matter of years, and to pursue the war indefinitely, through his second term, in the air, backing up President Thieu, the puppet leader, former general, in Vietnam and his army, the army that we supported and managed, with U.S. airpower.

And he virtually achieved that. He almost did, actually. By ’73, he did get the American troops out. People thought, “The war is over.” But from the point of view of bombing, generating refugees, torture, deaths in Vietnam, he was going on as before, and would have done so right through 1977 and later, had not the president been forced to resign for acts he took in the process of assuring his policy and assuring his staying in office. Namely, he kept his own policy of threatening nuclear war even and threatening major escalation, such as mining Haiphong and mining Hanoi and bombing Hanoi, which he did do, and going into the so-called sanctuaries, other countries, other sovereign countries, like Laos and Cambodia, all of which he did do. He did everything but the actual carrying out of nuclear weapons, which he discussed at the highest levels — and telling the people that he was getting out of the war all this time — another big lie, as we started with.

And I put out in 1969 to the Senate, and then to the newspapers in ’71, evidence that five previous — four previous presidents had made similar lies and escalations and threats, and the war had gone on. They preferred a bloody, escalating stalemate to the humiliation of ending the war the only way it could be ended, which was granting the Southern communist-led forces a role in the government and stopping the bombing of the North.

But Nixon was so beholden to President Thieu, Nguyen Van Thieu, that he had to keep him in there even when that was the only thing dividing this and keeping the war going in 1971 and ’72. We learned much later that Thieu regarded himself as having elected Nixon, and he was right in doing so. In the last days of 1968, Nixon’s people, at his orders, which we learned many years later, was telling Thieu, “Hold on. Don’t negotiate. We will give you better terms.” And indeed he had in mind giving him better terms, and he did. “We’ll keep you in power,” even though the communists are demanding as a part of the negotiations that Thieu personally not be part of the element. And that’s what we were fighting for. And that’s why tens of thousands of Americans — and millions of Vietnamese — died: to keep Thieu in power as long as Nixon was, which did happen. Nixon left before Thieu did, and Thieu left in ’75.

It would not have happened, had not Nixon been faced with impeachment for the crimes he took to keep the war going and keep it hidden, crimes mainly against me to keep me from putting out new documents that would incriminate him, like the nuclear threats and the others that he was making. And in the process of that, he burglarized my former psychoanalyst’s office. He sent 12 Cuban assets of the Bay of Pigs up to incapacitate me totally on the steps of the Capitol. On May 3rd, he overheard me on illegal, warrantless wiretaps. When all this began to come out as a result of truth-telling by John Dean to the prosecutors; Alex Butterfield telling the truth about the taping of the Oval Office, which is essential; Elliot Richardson and Ruckelshaus refusing the president’s orders to fire the special prosecutor, to fire the special prosecutor demanding the tapes; the Supreme Court, including three Nixon appointees, ruling unanimously they had give them over — all these steps were individually essential to facing the president with resignation or impeachment. And when he chose resignation, the war became endable. That’s why — that’s why president — rather, Henry Kissinger called me “the most dangerous man in America,” because he feared I had documents — documents — that would tell the truth about the lies he and his boss were telling.”