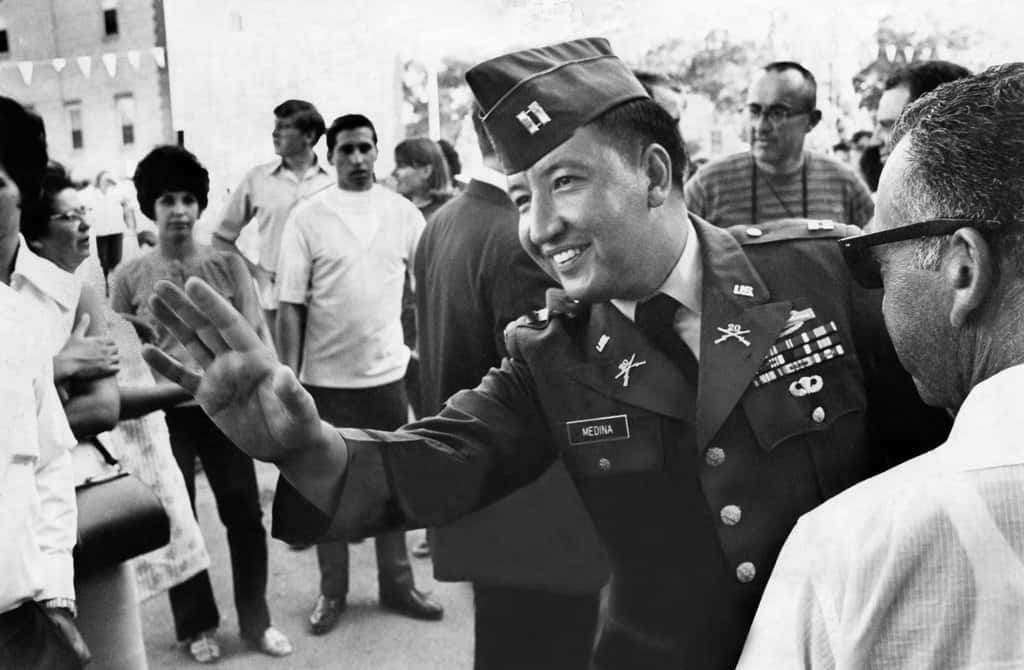 Photo caption: Capt. Ernest L. Medina on a visit to his hometown, Montrose, Colo., in 1970 after he had been charged in the massacre of Vietnamese in 1968. Photo Credit: Gary Settle/The New York Times

This obituary originally appeared at The New York Times on May 13, 2018.

Ernest L. Medina, the Army captain who was accused of overall responsibility for the March 1968 mass killings of unarmed South Vietnamese men, women and children by troops he commanded in what became known as the My Lai massacre, but was acquitted at a court-martial, died on Tuesday in Peshtigo, Wis. He was 81.

His death was confirmed by the Thielen Funeral Home in Marinette, a nearby town where he had lived. The cause was not given.

On March 16, 1968, a month and a half after North Vietnamese and Vietcong forces launched the Tet offensive, wide-ranging attacks that stunned the American military command in the Vietnam War, Captain Medina and the three platoons of his infantry company entered the village of My Lai in South Vietnam’s south central coast region.

What happened over the hours that followed became one of darkest chapters of American military history. An Army inquiry ultimately determined that 347 civilians were killed that day — shot, bayoneted or blasted with grenades. A Vietnamese memorial erected at the site has put the toll at 504.

But the mass killings were not exposed until November 1969, when the independent journalist Seymour Hersh, tipped off to the atrocity, wrote of it in a series of articles that brought him a Pulitzer Prize for international reporting.

The revelations were shocking in an America already divided over an increasingly unpopular war. But Captain Medina and Lieutenant William L. Calley Jr., who was subsequently convicted of murder at a court-martial as the leader of the platoon that carried out the massacre, came to be viewed by many as scapegoats in an unwinnable conflict.

Captain Medina and his men of Charlie Company, a unit in the 11th Brigade of the Americal Division, engaged in “search and destroy operations” in March 1968 aimed at clearing the Vietcong from populated areas where they were presumed to have taken refuge.

According to Captain Medina’s later testimony at Lieutenant Calley’s court-martial, Army intelligence had advised that the villagers of My Lai (pronounced ME-LYE) would be doing their customary shopping at a nearby marketplace when the troops arrived. Those left in the village at that hour would supposedly be Vietcong soldiers who had blended in with the population.

The intelligence was faulty.

While Captain Medina remained near his helicopter’s landing spot a few hundred yards outside of My Lai, keeping in radio contact with his men, Lieutenant Calley, an inexperienced officer, and his equally green infantrymen rampaged through the village, encountering only unarmed civilians.

The massacre that unfolded did not conclude until a helicopter pilot, Chief Warrant Officer Hugh Thompson Jr., hovering with two crewmen to identify enemy positions by drawing expected Vietcong fire, saw signs of mass killings, landed in the village, demanded at gunpoint that Lieutenant Calley halt the attack and alerted higher authorities by radio.

Lieutenant Calley was convicted of premeditated murder of least 22 civilians at a lengthy court-martial ending in March 1971.

He testified that Captain Medina had ordered him via radio to “get rid of” what the lieutenant had described as “enemy personnel” whose detention was slowing his progress through the village.

Captain Medina denied that the conversation took place and his testimony was corroborated by his radio officer. He testified that in his pre-assault briefing, he had not generally addressed the issue of what to do with civilians in the village since he assumed everyone there would be Vietcong.

Lieutenant Calley was sentenced to 20 years in prison but the case became embroiled in court battles and he spent a little more than three years confined to barracks or under house arrest at Fort Benning, Ga., before being released.

Captain Medina went on trial in September 1971, defended by the prominent criminal lawyer F. Lee Bailey, as well as a military lawyer. He was charged with involuntary manslaughter of at least 100 civilians, the murder of a woman and two counts of assault against a prisoner by firing twice over his head to frighten him the night after the massacre.

The defense contended that Captain Medina was unaware of large-scale killings of defenseless civilians until they had already occurred. The prosecution argued that the defense account was not credible since Captain Medina had been in continual radio contact with his platoons. The court-martial panel of five combat officers returned not guilty verdicts on all counts after an hour’s deliberation.

Following revelations of the massacre in the news media, the Army undertook an official investigation. Lt. Gen. William R. Peers, who oversaw it, declared on March 18, 1970, “Our inquiry clearly established that a tragedy of major proportions occurred there on that day.”

Lieutenant Calley was the only soldier convicted on criminal charges in connection with the massacre. Maj. Gen. Samuel W. Koster, the commander of the Americal Division, was found by an Army inquiry to have failed to investigate reports of the mass killings adequately. He was demoted one rank, to brigadier general. Col. Oran Henderson, a brigade commander in the division, stood trial and was acquitted of cover-up charges. Both had hovered above My Lai in their helicopters during the massacre but maintained they had been unaware of mass murders.

Ernest Lou Medina was born on Aug. 27, 1936, in Springer, N.M., one of two children of Simon Medina, a ranch hand, and his wife, Pauline. His mother died of cancer when he was an infant and his father sent him and his sister to live with grandparents in Montrose, Colo., while pursuing work as a sheepherder.

After graduating from high school he enlisted in the Army as a private in 1956. He later attended Officer Candidate School, was commissioned as a lieutenant and arrived in Vietnam in December 1967.

In the weeks before My Lai, Lieutenant Calley’s platoon had suffered casualties when his men wandered into a minefield. Captain Medina rescued survivors, an act for which he was later awarded a Silver Star.

Mr. Medina and Mr. Calley both resigned from the Army after their court-martials. Mr. Medina settled with his family in Marinette and worked as a salesman for a helicopter company and a real estate agent. Mr. Calley joined a family jewelry business in Georgia.

Mr. Medina’s survivors include his wife, Barbara; his sons Greg and Cecil and a daughter, Ingrid Medina; his sister, Linda Lovato, and eight grandchildren.

In an interview with The Associated Press in 1988, Mr. Medina called the My Lai killings a “horrendous thing.”

“I have regrets for it, but I have no guilt over it because I didn’t cause it,” he said. “That’s not what the military, particularly the United States Army, is trained for.”

He said that the My Lai killings needed to be viewed in the context of the Vietnam War.

“But then again, maybe the war should have never happened,” he added. “I think if everybody were to look at it in hindsight, I’m sure a lot of the politicians and generals would think of it otherwise. Maybe it was a war that we should have probably never gotten involved in as deeply as we did without the will to win it.”