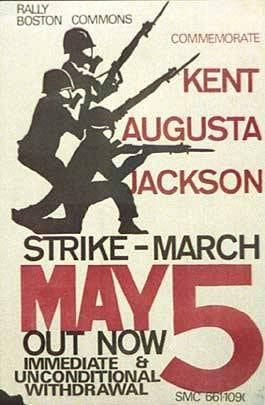 From the Vietnam Peace Commemoration Committee:

May 2020 marks the 50th anniversary of the tragic killing of students at Kent State and Jackson State along with the first and largest nationwide student strike in American history.

On April 30, 1970, President Richard Nixon expanded the American War in Vietnam by announcing an invasion into Cambodia. In response, a National Student Strike was called in early May, 1970, with over 500 colleges and universities participating, as well as some high schools.

On May 4, 1970, the National Guard shot and killed four students and wounded eleven others during an antiwar protest at Kent State University in Ohio. On May 15, 1970, police shot and killed two students and wounded eight others at Jackson State University, a predominantly black college in Mississippi. In response to these killings, student protests exploded nationwide, often with faculty support, and classes were cancelled on hundreds of campuses.

In May 2020 there will be 50th anniversary events held at Kent State and Jackson State.

Vietnam Peace Commemoration Committee (VPCC) is calling for local events nationwide at college campuses and in communities between May 1 to May 15, 2020, to mark the anniversary of the strike, to honor those who were killed and wounded 50 years ago, to remember the history of the local peace movement.

We also see these anniversaries as a time to remind students today of the power of organized protest, and to inspire young people to actively confront the realities that now threaten their lives and futures — whether shootings by police of people of color, reckless gun violence, the challenge of climate change, the danger posed by nuclear weapons, forever wars of foreign intervention, or other concerns. Coming during the Presidential primary months, student actions can influence the policy debates during the primaries and beyond.

More resources will be available soon on the VPCC website to support local initiatives.

Please let us know of your plans using our contact form. VPCC welcomes your donations to help us promote and organize for May 2020.

Thank you for your participation.