I Ain’t Marching Anymore: A Conversation on the History of Dissent 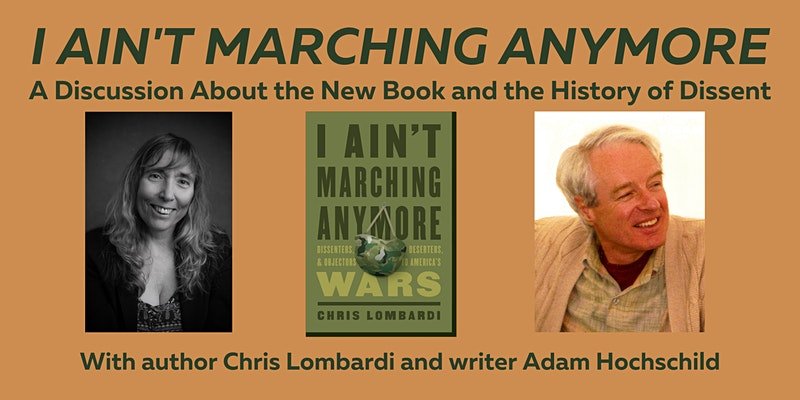 Join Chris Lombardi & Adam Hochschild for a conversation on writing narrative nonfiction & the history of dissent in the U.S. armed forces.

On the eve of Veteran’s Day, in a year filled with anniversaries of war, journalist Chris Lombardi joins renowned writer Adam Hochschild to discuss the passionate men and women in uniform who have bravely and courageously exercised the power of dissent.

Dissent, the hallowed expression of disagreement and refusal to comply with the government’s wishes, has a long history in the United States. Before the U.S. Constitution had even been signed, soldiers and new veterans protested. Soldier dissenters, outraged by the country’s wars or egregious violations in conduct, have spoken out and changed U.S. politics, social welfare systems, and histories.

Chris Lombardi’s new book, I Ain’t Marching Anymore: Dissenters, Deserters, and Objectors to America’s Wars, traces soldier dissent through American history, from the genocidal “Indian Wars” through the Civil War and the World Wars to the present. Her profiles of soldier dissenters like Frederick Douglass’s son Lewis, Howard Zinn, and Chelsea Manning bring human dimensions to debates about war, peace, and the dynamics of social change.

***Register through Eventbrite to receive a link to the video conference on the day of the event. This event will also be recorded.***

Journalist Chris Lombardi has been writing about war and peace for more than twenty years. Her work has appeared in The Nation, Guernica, the Philadelphia Inquirer, ABA Journal, and at WHYY.org. Her book I Ain’t Marching Anymore: Dissenters, Deserters, and Objectors to America’s Wars is newly published by The New Press.

Adam Hochschild’s writing has usually focused on human rights and social justice. His latest book, called an “exceptionally engaging biography” by the Washington Post is Rebel Cinderella: From Rags to Riches to Radical, the Epic Journey of Rose Pastor Stokes. His other nine books include King Leopold’s Ghost: A Story of Greed, Terror and Heroism in Colonial Africa. His Bury the Chains: Prophets and Rebels in the Fight to Free an Empire’s Slaves was a finalist for the 2005 National Book Award and won the Los Angeles Times Book Prize. To End All Wars: A Story of Loyalty and Rebellion, 1914-1918 won the Dayton Literary Peace Prize and was a finalist for the National Book Critics Circle Award.

The New Press is a nonprofit, public interest book publisher.

As an independent press, every dollar we take in goes directly to support our mission of publishing books to bring about a more just world.

While all of our events are freely available, we ask that those who are able make a solidarity donation in support of our work.