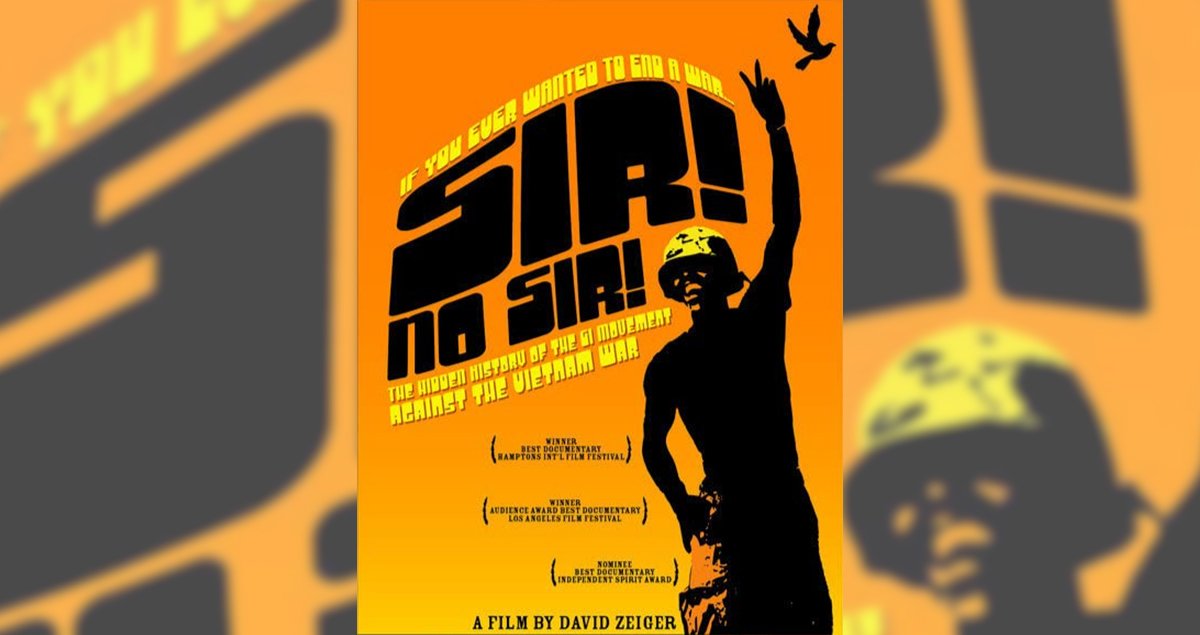 Free viewing of upgraded film at 530 p.m. followed by discussion with filmmaker at 7 p.m. ET

David Zeiger, Director/Writer/Producer, received a 2010 Guggenheim Fellowship for his debut narrative feature, Sweet Old World, which premiered in 2012 at the Atlanta Film Festival and is distributed by Passion River Films.

With a development grant from the National Endowment for the Humanities, he is currently in production on a feature documentary, May 1970, telling the story of the nineteen sixties student movement and the government’s attempts to suppress it.

His 2005 film, Sir! No Sir!, premiered at the Los Angeles Film Festival where it won the Audience Award for Best Documentary. It went on to win Best Documentary at the Hamptons International Film Festival, the Seeds of War Award at the Full Frame Documentary Film Festival, and Best Film on War and Peace at the Vermont International Film Festival. It was nominated for Independent Spirit, International Documentary, and Gotham Awards. The film garnered rave reviews during its 80-city theatrical run, including “Two Thumbs Up” from Ebert and Roeper. Manohla Dargis called it “Smart and timely” in the New York Times, and the New York Daily News wrote “This is powerful stuff, offering us not only a new look at the past, but unavoidably relevant insights into the present.” It has been broadcast on television worldwide, including the BBC, CBC/Canada, ARTE/France, and ABC/Australia, and the Sundance Channel in the U.S.

He followed that up in 2008-09 with the web series This is Where We Take Our Stand, that tells the story of “Winter Soldier/Iraq and Afghanistan,” an event in which 250 veterans of those wars gave testimony condemning them. In December 2009, he was awarded full funding from PBS’s Independent Television Service to turn the series into a film for a 2011 broadcast.

Zeiger created, produced and directed the landmark 13-part documentary series, Senior Year, for broadcast on PBS in January 2002. The series follows a group of 15 students at Fairfax High, the most diverse school in Los Angeles, through their last year in high school. About the series, Entertainment Weekly wrote, “Others have tried to document high school life, but this series succeeds where those drier efforts failed…High school is a time for experimentation, and finally, a truly experimental filmmaker is there.” Funded by CPB, NAATA, LPB, and the MacArthur and Kellogg Foundations, Senior Year was broadcast in Europe on Planete Cable, and was a premiere series on the new U.S. English/Spanish cable network SíTV in 2004.

His short film Funny Old Guys premiered August, 2002, at the Museum of Television and Radio in Los Angeles. Its television premiere was August 19, 2003, on the HBO Documentary series “Still Kicking, Still Laughing.” Funny Old Guys captures the final months of the life of Frank Tarloff, formerly blacklisted Academy Award winning writer, as he and a group of friends, all former TV and film writers, confront his imminent death. The Band, Mr. Zeiger’s tribute to his son, aired to critical acclaim on the PBS series P.O.V. in 1998. It has screened at the International Documentary Filmfestival Amsterdam and AFI Film Festival in Los Angeles, and was awarded “Best Documentary” and “Best of Show” at the Central Florida Film Festival. The Band was broadcast in 2000 on the French/German network ARTE.

Keith Mather, Presidio “mutineer”, escaped to Canada before his trial came up and lived there for 11 years, only to be arrested upon his return to the United States. Mather is currently a member of the San Francisco Bay Area Chapter of Veterans for Peace.

Jerry Lembcke grew up in Northwest Iowa. He was drafted in 1968 and served as a Chaplain’s Assistant in Vietnam. He is the author of eight books including The Spitting Image, CNN’s Tailwind Tail, and Hanoi Jane. His newest book co-authored with Tom Wilber and published by Monthly Review Press is Dissenting POWs: From Vietnam’s Hoa Lo Prison to America Today. Jerry’s opinion pieces have appeared in The New York Times, Boston Globe, and The Chronicle of Higher Education. He is presently Associate Professor of Sociology, Emeritus, at Holy Cross College and Distinguished Lecturer for the Organization of American Historians.