The Lasting Effects of War 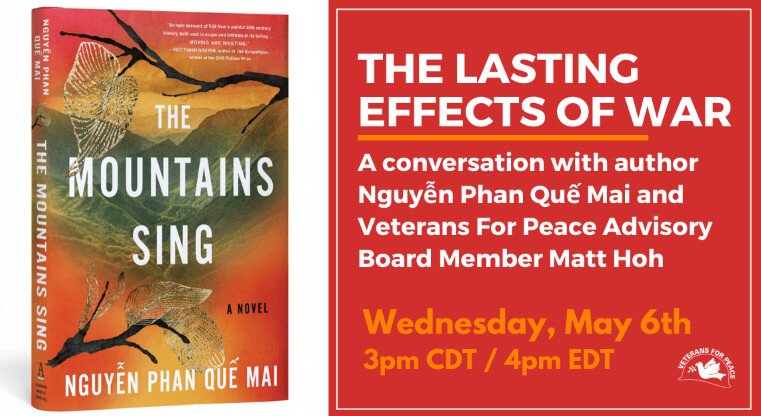 Please join award winning author Nguyễn Phan Quế Mai as she discusses her latest book, The Mountains Sing, a novel about multiple generations of a family living through the decades of war in Vietnam. Hosted by Veterans For Peace, this conversation, to include a reading from The Mountains Sing, will allow attendees to join with Que Mai to discuss the lasting effects of war on all participants. Moderated by Veterans For Peace advisory board member, Matthew Hoh, this will be both a timely and timeless conversation about war, borders, history, nationalities and the urgent need for a renewed dedication towards peace, reconciliation and internationalism.

Born into the Viet Nam War in 1973, Nguyễn Phan Quế Mai grew up witnessing the war’s devastation and its aftermath. She worked as a street vendor and rice farmer before winning a scholarship to attend university in Australia. Upon returning to Vietnam, she helped to foster Vietnam’s sustainable development via her positions with international organisations including UN agencies. The author of eleven books of poetry, fiction and non-fiction in Vietnamese and English, Quế Mai has won the Poetry of the Year 2010 Award from the Hanoi Writers Association, the Capital’s Literature & Arts Award, First Prize – the Poetry Competition About 1,000 Years Hanoi… Quế Mai’s main research area is the long lasting impact of wars. She has worked extensively with veterans and war victims. She voluntarily translated Vietnamese and American veterans’ writings, published them and facilitated literary exchanges the purpose of healing, reconciliation and peace. For more information, visit www.nguyenphanquemai.com

Matthew Hoh is a member of the advisory boards of Expose Facts, Veterans For Peace and World Beyond War. In 2009 he resigned his position with the State Department in Afghanistan in protest of the escalation of the Afghan War by the Obama Administration. He previously had been in Iraq with a State Department team and with the U.S. Marines. He is a Senior Fellow with the Center for International Policy. His review of The Mountains Sing, published by CounterPunch.

The Mountains Sing can be purchased as a hard cover book, an e-book or an audiobook. For purchase links, please visit Algonquin Books.  For a limited time the author is offering the book at a 20% discount to all VFP members.  Please use code VFP20 at checkout.

An overview of the book:

Set against the backdrop of the Việt Nam War, The Mountains Sing tells an enveloping, multigenerational tale of the Trần family. Trần Diệu Lan, who was born in 1920, was forced to flee her family farm with her six children during the Land Reform as the Communist government rose in the North. Years later in Hà Nội, her young granddaughter, Hương, comes of age as her parents and uncles head off down the Hồ Chí Minh Trail to fight in a conflict that tore not just her beloved country, but her family apart.

The Mountains Sing has been praised as “an absorbing, stirring novel” by The New York Times, “luminous” by NPR, “the missing narrative of the American War in Vietnam” by The Star Tribune, and “a window, a view into what we have done and continue to do to so many all over the world” by CounterPunch.

The Mountains Sing had also received strong endorsements from veterans of the Vietnam War. According to Karl Marlantes, bestselling author of Matterhorn, What It’s Like to Go to War, “Reading this novel, I was moved by Nguyễn Phan Quế Mai’s beautiful, even poetic, depictions of enduring courage. I came away with a deeper understanding of the war in which I fought.” According to Larry Heinemann, author of Paco’s Story, winner of the National Book Award, “The Mountains Sing is a beautiful story of the simple challenge of keeping a family together and the courage of perseverance. It is told with the sureness of a master storyteller with a poet’s spirit. A large and complicated story, marvelous to read.”

Quế Mai is excited and honored to join Matthew Hoh in a conversation about her book. She will be reading from The Mountains Sing and answer the audience questions.