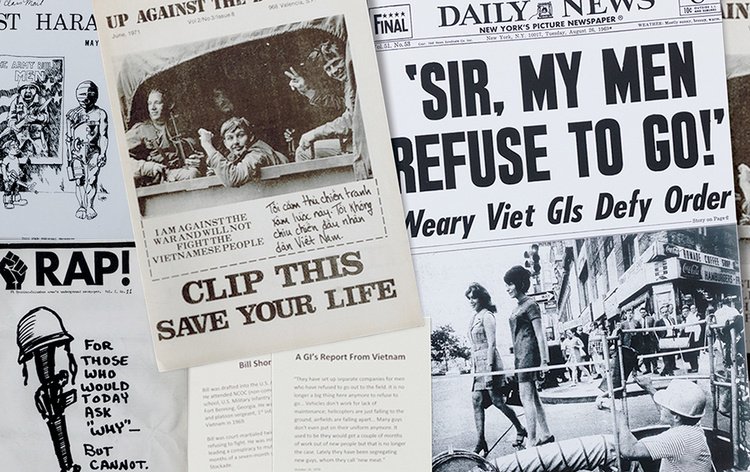 6:30: Exhibit viewing and meet & greet with panelists
7:30: Panel and conversation

ADMISSION:
Admission is free.  Reservations required. RSVP at the link below.

All attendees are required to be fully vaccinated against COVID-19 or to have had a negative COVID-19 test within 72 hours of the start of this event. Verification must be provided at the event check-in. Face masks will be required for all attendees, vaccinated or unvaccinated. Masks should be worn at all times when individuals are not actively consuming food or beverage. Additionally, all guests must complete the Trojan Check health screening on the day of their visit to campus. Trojan Check verification must be presented at the event check-in.

About the presenters and panelists:

David Cortright enlisted in the U.S. Army in 1968. He spoke out publicly against the Vietnam War as part of the GI peace movement and filed a federal court lawsuit against the Army over the First Amendment rights of soldiers in 1970.  Cortright has taught peace studies at the University of Notre Dame for 30 years and is now Professor Emeritus. He is the author or editor of more than 20 books, including Soldiers in Revolt: GI Resistance During the Vietnam War, published initially in 1975, and Waging Peace in Vietnam: Soldiers and Veterans Who Opposed the War, with Ron Carver and Barbara Doherty in 2019.

University of Notre Dame assistant professor of Sociology Dana Moss (moderator) researches how authoritarian forces repress their critics and how collective actors resist this repression in a globalized world. From 2016 to 2020, Dana was an assistant professor at the University of Pittsburgh, where she was awarded the 2020 Tina and David Bellet Excellence in Teaching Award.

Susan Schnall was a Navy nurse who led the GI antiwar march in San Francisco in October 1968. She is an assistant adjunct professor at NYU School of Professional Studies and the president of the New York City Veterans For Peace. She has organized scientific panels about Agent Orange at American Public Health Association annual meetings.

William Short is a combat veteran and GI resister who refused to continue to fight in Vietnam. In 1992, with his wife, journalist Willa Seidenberg, the Los Angeles–based educator and photographer published A Matter of Conscience: GI Resistance During the Vietnam War, containing oral histories of veterans who turned against the Vietnam War and his portraits of them. A number of Short’s photographs and oral histories are included in the book Waging Peace in Vietnam: U.S. Soldiers and Veterans Who Opposed the War.

Diane Winston holds the Knight Chair in Media and Religion at the USC Annenberg School for Communication and Journalism. She is a national authority on religion, politics, and the news media as well as religion and the entertainment media. As a journalist and scholar, Winston’s current research interests are media coverage of Islam, religion and new media, and the place of religion in American identity.

MIke Wong was in medic training when the My Lai Massacre took place. Horrified, he refused orders to Vietnam, turned himself in to the Presidio stockade, and went to Canada with the help of the underground railroad and organizations there rather than fight in the war. Today, Wong is part of Veterans for Peace and the Comfort Women Justice Coalition.

USC Visions and Voices: The Arts and Humanities Initiative