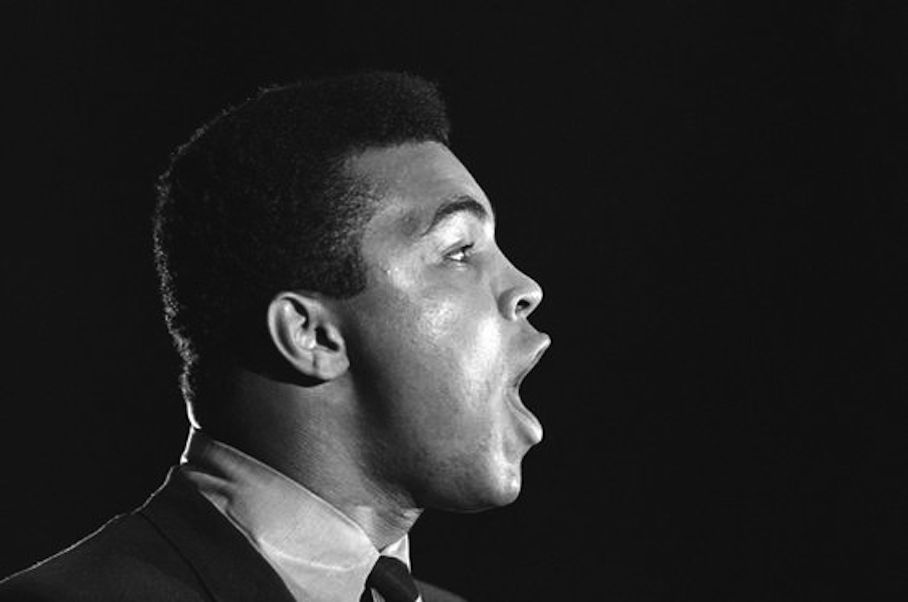 This article originally appeared at the TampaBay.com

He was fast of fist and foot — lip, too — a heavyweight champion who promised to shock the world and did. He floated. He stung. Mostly he thrilled, even after the punches had taken their toll and his voice barely rose above a whisper.

He was the Greatest.

Muhammad Ali died Friday at age 74, according to a statement from the family. He was hospitalized in the Phoenix area with respiratory problems earlier this week, and his children gathered around him.

RELATED: Muhammad Ali, who riveted the world as ‘the Greatest,’ dies at 74 (w/ video)

“It’s a sad day for life, man. I loved Muhammad Ali, he was my friend. Ali will never die,” Don King, who promoted some of Mr. Ali’s biggest fights, told the Associated Press early Saturday. “Like Martin Luther King his spirit will live on, he stood for the world.”

MARTIN FENNELLY: A champion leaves us with a name for the ages: Ali

With a wit as sharp as the punches he used to “whup” opponents, Mr. Ali dominated sports for two decades before time and Parkinson’s, triggered by thousands of blows to the head, ravaged his magnificent body, muted his majestic voice and ended his storied career in 1981.

Ali won and defended the heavyweight championship in epic fights in exotic locations, spoke loudly on behalf of blacks, and famously refused to be drafted into the Army during the Vietnam War because of his Muslim beliefs.

As a boxer, Ali was responsible for some of the most memorable moments in sports: from winning Olympic gold in 1960, defeating Sonny Liston, the Rumble in the Jungle and the Thrilla in Manilla to his surprising appearance at the torchlighting for the 1996 Summer Olympics.

Here is a look back at Ali over the past six decades.

A trio of U.S. boxers wear gold medals at the Olympic village in Rome, on Sept. 6, 1960. From the left are: Wilbert McClure of Toledo, Ohio, light middleweight; Cassius Clay of Louisville, KY, light heavyweight; and Edward Crook of Fort Campbell, KY, middleweight.

Muhammad Ali in 1963, back when he was still known as Cassius Clay.

Sugar Ray Robinson, left, and Cassius Clay (who would later change his name to Muhammad Ali), right, gesture like champs on the way to the dressing room after Clay’s technical knockout victory in the seventh round over heavyweight champion Sonny Liston in Miami Beach on Feb. 25, 1964 photo.

Heavyweight champion Muhammad Ali is held back by referee Joe Walcott, left, after Ali knocked out challenger Sonny Liston in the first round of their title fight May 25, 1965, in Lewiston, Maine. The bout produced one of the strangest finishes in boxing history as well as one of sports’ most iconic moments.

Muhammad Ali, the deposed world heavyweight boxing champion, told an anti-war rally at the University of Chicago on May 11, 1967, that there is a difference between fighting in the ring and fighting in Vietnam.

Muhammad Ali, right, winces as Ken Norton hits him with a left to the head in their scheduled 12-round rematch on Sept. 10, 1973, at the Forum in Inglewood, Calif.

The Rumble in the Jungle, in Kinshasa, Zaire on the night of Oct. 30, 1974, pitted the undefeated world heavyweight champion George Foreman against challenger Muhammad Ali, the former champion. Ali won.

Foreman goes down for a 10-count after taking a series of hits from Ali in the eighth round of the Rumble in the Jungle in Zaire on Oct. 30, 1974.

Muhammad Ali throws a right at Joe Frazier in the 13th round in their title bout in Manila, Philippines, on Oct. 1, 1975. It was, Muhammad Ali would later say, the closest thing to death he had ever known. He and Joe Frazier had gone 14 brutal rounds in stifling heat off a Philippines morning before Frazier trainer Eddie Futch mercifully signaled things to an end, his fighter blind and battered and feeling pretty close to death himself. The Thrilla in Manilla still lives in sporting lore.

Muhammad Ali, a noted mouthpiece of the boxing world, has to listen here as heavyweight champion Leon Spinks has the floor for a word during their contract signing in New Orleans on April 11, 1978. The fighters would meet that Sept. 15 in the Superdome.

Under the eyes of his conditioner Lloyd Wells, left and his masseur Luis Sarria, Muhammad Ali endures one of the 300 daily sit-ups that are part of his exercise routine.

Trying to regain the spotlight as a boxer is no easy task for the 39-year-old former champion Muhammad Ali. Here, Ali works out with a heavy bag during his training session in December 1981 in preparation for a fight against Trevor Berbick.

Muhammad Ali watches as the flame climbs up to the Olympic torch during the opening ceremonies of the Summer Olympics on July 19, 1996, in Atlanta.

Muhammad Ali kisses the gold medal that replaced the 1960 gold medal he lost. The replacement was presented during ceremonies at the Centennial Summer Olympic Games in Atlanta on Aug. 3, 1996.

President George W. Bush presents the Presidential Medal of Freedom to boxer Muhammad Ali in the East Room of the White House on Nov. 9, 2005.

Muhammad Ali attends the Michael J. Fox Foundation’s A Funny Thing Happened On The Way To Cure Parkinson’s benefit gala on Nov. 11. 2006, at the Waldorf Astoria in New York.

Muhammad Ali unveils a monument on Sept. 1, 2009, in Ennis, Ireland, where his great grandfather used to live. Ali was visiting the United Kingdom and Ireland to promote his various charities.

Muhammad Ali, right, celebrates his 70th birthday next to his longtime trainer Angelo Dundee, at a fundraiser for the Muhammad Ali Center in his hometown of Louisville, Ky., on Jan. 14, 2012.

Three-time heavyweight champion Muhammad Ali, center, and his wife, Lonnie Ali, left, attend Angelo Dundee’s funeral on Feb. 10, 2012, at the Countryside Christian Center in Clearwater. Dundee, who died of a heart attack at 90 years old, trained Muhammad Ali and also worked with 15 other world champions during a six-decade career.

Muhammad Ali attends the Sports For Peace Fundraising Ball on July 25, 2012, in London.

Perspiration beads the face of world heavyweight boxing champion Muhammad Ali shown in training for his May 25, 1965, fight with Sonny Liston at Lewiston, Maine.