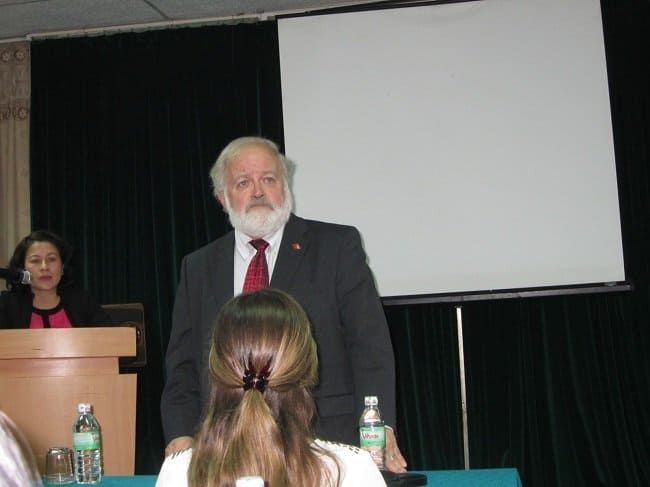 This article was originally publsihed at thebatavian.com submitted  by Billie Owens.

The sick and disabled children of Vietnam lost a great champion on Nov. 2 — an East Pembroke resident who worked tirelessly to help them. Kenneth J. Herrmann Jr. died that day at his home after a short battle with pancreatic cancer. He was 71.

He was an associate professor in the Department of Social Work for the College at Brockport for 37 years. He was also a Vietnam veteran who earned a Bronze Star medal for service in the Army from 1968-1969.

The devastation of Vietnam and victims of the highly toxic chemical herbicide Agent Orange were at the core of his lifetime passion for social work, education and aiding children.

He created and served as director of the Brockport Vietnam Program, a global, service-learning, study-abroad program. In addition, he was president and executive director of the Danang QuangNam Fund, Inc., (also referred to as Agent Orange Children) a nongovernmental organization he started in 2001 to provide direct monetary aid for Vietnamese victims. (His wife, Susan, is now in charge of the fund.) He was proud of receiving a Certificate of Merit from the Danang People’s Committee for his efforts.

Herrmann wrote several books about his experiences: “I Hope My Daddy Dies,” “Mister, I’m Nobody’s Child,” and “Lepers & Lunacy: An American in Vietnam” (also published in Vietnamese), and released in March by Berkeley Press, his final book “Child Welfare Practice: A Conversation About Reality.”

He was also featured in a post-war documentary featuring Brockport students called “Going Back,” which is about three vets returning to Vietnam to do humanitarian work. It’s theme, Herrmann had said, is essentially making peace with yourself in order to make peace with the war.

That is hard for anyone, and for the people forever changed by Agent Orange, it is harder still, impossible for many. The compound was used from about 1965-70 and was intended to deprive farmers and guerilla fighters of clean water and food in the hopes they would move to areas more under U.S. control. Killing foliage also helped make the enemy more visible. No one and nothing was spared in its wake — soil, wildlife, the entire ecosystem — and when the Vietnamese people ate the food, they ingested the chemical, thereby passing down generation after generation, a host of mental and physical deformities.

More than 20 million gallons of herbicides and defoliants were sprayed over 6 million acres of forests and fields, according to the federal government. The substance was later determined to be in violation of the Geneva Agreement and its use was gradually stopped.

(Agent Orange is not to be confused with napalm — a toxic, jelly-like substance that, when ignited, sticks to almost anything it contacts and burns it in minutes.)

According to the Red Cross, more than 4 million people died were exposed to Agent Orange, and as a result, 2 to 3 million people spanning three generations and counting have died or suffered from many kinds of illnesses, diseases or deformities, including severe birth defects. The numbers of those affected — both here and abroad — have been disputed, but not the longstanding and widespread scope of the noxious compound’s impact.

Forty-nine trips were made by Herrmann to Vietnam, including his first post-war visit in 1998. When interviewed by The Batavian in 2010, he estimated that about 13,000 victims of Agent Orange and their families had been helped up to that point, thanks to donors and humanitarian workers like himself who support the Danang QuangNam Fund, Inc.