Finding the Gulf of Tonkin, finding 9/11: a fraud by the United States 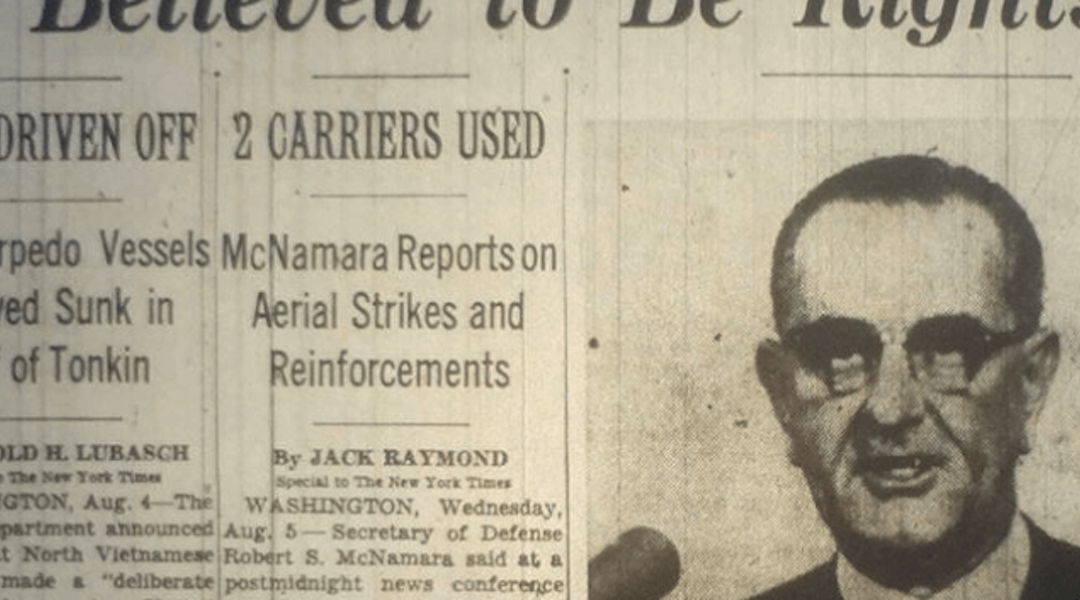 2nd edition
Finding the Gulf of Tonkin: internet, Pentagon Papers censorship/fraud of LBJ’s August 4, 1964 speech: “There were no US losses.”
begun here, strictly speaking, September 1, 2011 at 1:51pm
formerly: Conscience of the Country

For the millions of people affected by the US war with Vietnam.

On August 4, 1964, President Lyndon Johnson admitted there was no US losses in the Gulf of Tonkin incident in a televised speech that was also published in leading newspapers the following day. This speech is now hidden in history. The speech and the information of “no losses” is in direct contradiction with presentations of that information as “declassified” since 1995 in the Robert McNamara book and film productions and by the National Security Agency. The information was never classified. It was known all along. And this is how it was known.
Finding the Gulf of Tonkin: an exposé of disinformation; reading the Pentagon Papers; the content and the cover-up of that content; screenshots of search engine lists to witness fraud by the United States government.
Relevant Links
Link to jpegs of The New York Times front page August 5, 1964; photographs of In Retrospect: the tragedy and lessons of Vietnam “Yet we were wrong, terribly wrong.”; screenshots of three pages from the Pentagon Papers
https://www.facebook.com/arttoegemann/media_set?set=a.10152968626093854.1073741845.747603853&type=3
Link to video of LBJ speech televised August 4, 1964 Tonkin Gulf Address to the Nation; “There were no US losses.” at 1’16” http://www.youtube.com/watch?v=Dx8-ffiYyzA
The Pentagon Papers
http://www.cc.gatech.edu/~tpilsch/PentagonPapers.html complete
http://www.archives.gov/research/pentagon-papers/?hc_location=ufi
link to newsbank of Providence Journal August 5, 1964
https://infoweb.newsbank.com/apps/news/openurl?ctx_ver=z39.88-2004&rft_id=info%3Asid/infoweb.newsbank.com&svc_dat=AMNEWS&req_dat=475EE3144FAE4E5290A673DD195FD5EB&rft_val_format=info%3Aofi/fmt%3Akev%3Amtx%3Actx&rft_dat=document_id%3Aimage%252Fv2%253A14728889532D3B69%2540EANX-1647D3D920AA7A6D%25402438613-16479C16B7AEB3AB%25400/hlterms%3A
This project requires that we read critically the internet search engine lists. There is a manipulation of these lists, and even the public library/publishing industry, so that the past and the history of that past are reversed. This false history occurs at US President Lyndon Johnson’s Address to the Nation on August 4, 1964. This speech provided grounds for conscientious objection, in all its forms, to the US war with Vietnam. It is evidence for both exculpation of all related accusations and of protest as national service. And it is suppressed. The cover-up of the speech reduces the credibility of the US.
The August 4 speech to the nation was originally broadcast, televised, 11:20pm EST as a US presidential speech, using all television stations and radio. It was published the following day on the front pages of the New York Times and The Washington Post; and in the first sections of The Boston Globe, The Atlanta Constitution, (and The Providence Journal, later), in which Johnson stated at the end of the second paragraph, “There were no US losses.” in the Gulf of Tonkin incident. An additional report from the Pentagon confirmed “no casualties, no damage”, on the same front pages of the Times and the Post. The library I used has the LA Times and the Chicago Tribune on microfilm, but not for this date. The Globe published an Extra edition with the headline “LBJ Orders Navy: Shoot to Kill”.
Subsequent teach-ins and protests then regularly featured this fact about the Gulf of Tonkin, Tonkin Gulf Resolution/incident; of no losses, no casualties, no damage. See links above to pictures of the August 5, 1964 New York Times front page and the video of the televised speech provided by the Miller Center, University of Virginia.
But, to begin an internet search with “Gulf of Tonkin” or “US war with Vietnam” and even all histories available from an urban public library/federal repository, friend and critic alike neglect President Lyndon Johnson’s August 4, 1964 Address to the Nation. When searching “Gulf of Tonkin”, Google, the most popular internet search engine, has Johnson’s August 5 speech to Congress at its first page of internet links. Johnson’s August 4 speech to the nation is finally listed at over 10 pages in, over 100 links later, after links to Iraq. I emailed Google and asked it how this happened. Google replied its lists are organized by relevance; they admitted they did not know how this omission occurred. I checked the list again on June 9, 2014. The speech, in video, was then on the second page of google links, courtesy of the Miller Center; this essay? 6/13: first page; 6/22: second page. bing and yahoo do not list the speech at all. Today, April 29, 2015, I sent this feedback to bing:

“I am writing a Note at facebook wherein I mention an omission by bing. Google has made the same omission. When I brought it to google’s attention, there was some correction. The omission: searching “Gulf of Tonkin”, “Tonkin Gulf”, “US war with Vietnam” fails to list LBJ’s August 4, 1964 Address to the Nation. In it he admitted “There were no US losses.”

“Approximately 34% of the report is available for the first time” ; then: “The complete Report is now available with no redactions compared to previous releases ” The internet file is not digitized, it is in the form of photographs of the actual files, and function with Adobe is clumsy.
This supposed breach of security was actually a non-revelation of information already broadcast and published since 1964; if it isn’t a revelation, then what is it? A gesture? A leak that is a cover-up? Some veterans complain that the August 4 speech “doesn’t make (them) look good.”