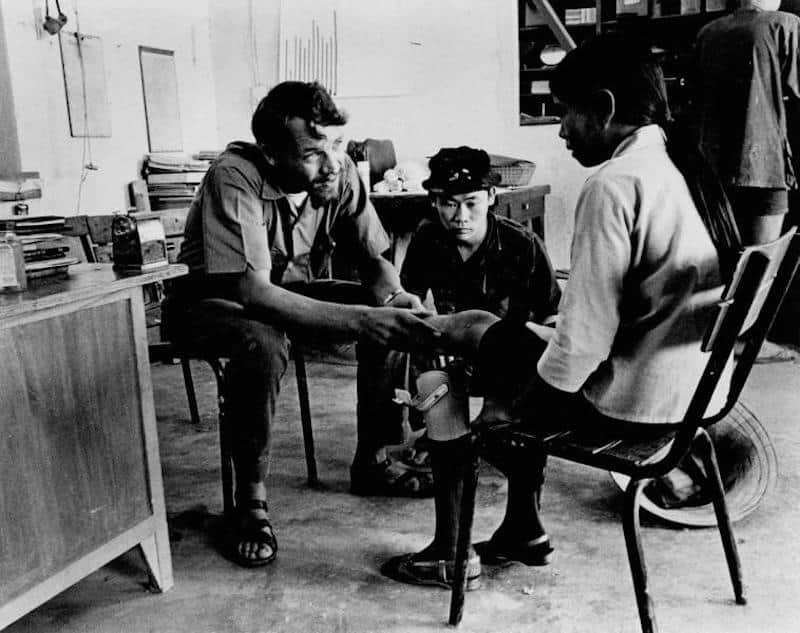 This article originally appeared at CivilianPublicService.org.

What I did notice was that he was wearing a U.S. Army uniform, complete with name  tag and  flashes  on  his  shoulders,  again  not  too 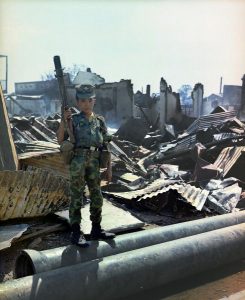 unusual,  as  the  Vietnamese often  wear  a  confusing  variety  of  clothes  and  uniforms.  In  this  case, though,  Vo-Han  was  obviously  a  child  of  no  more  than  fourteen  years  old.  I suddenly got the feeling that this was an unusual patient.  The  Army  captain  seemed to  be  uneasy,  and  I instinctively  felt  a  strange  sensation  of  aggression towards  him  and  the  other  two soldiers.

The captain introduced himself and told me Vo-Han, who was in fact thirteen years old, was employed by the U.S. Army as an interpreter.  He had been out on patrol with a U.S. unit some five months ago and had detonated a VC mine. It was  at  this  point  that  I  realized  what  the  setup was.  I had heard about such children being employed by U.S.  patrols but  I  had  never  before  met one. 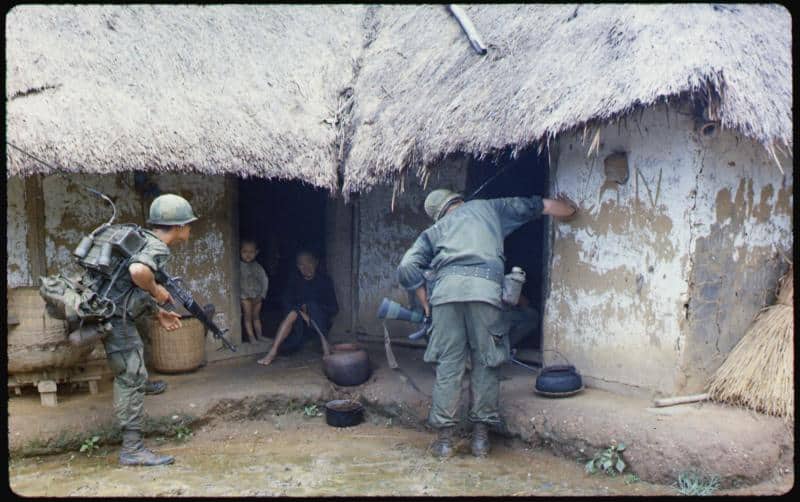 but Vo-Han  explained.  A person who is stubborn in answering questions is hung 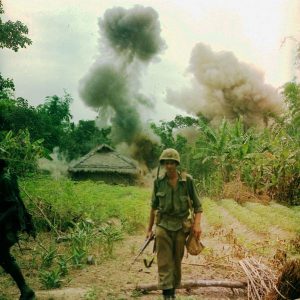 Q. When you were wounded, what would have happened if the VC had got to you before the Americans? (This was a loaded question. I wanted to find out what  sort  of  protection  was  given  to  these  children  under  such  circumstances.  But the  answer we got was another surprise.

Q.  What sort of weapons?

Q. What will you do when you get your new legs?

A. I’ll go back to Charlie Company.

Q. What will you do if the Americans leave Vietnam?

M-49; they not go until they kill every  (expletive) VC.  VC number ten

A. The Americans no leave Vietnam until every (expletive) VC  dead

At  this  point  Vo-Han  seemed  to  get  fed  up with  talking  to  us.  I got the impression he though  we  were  very  naive.  He had none of the quiet good manners of  a  normal  Vietnamese  child  his  age,  and  he  left  us  propelling  himself  away in his wheelchair.

VO-HAN  GIVES  THE  IMPRESSION  OF  BEING  TOUGH,  STURDY,  AND  SELF-RELIANT, BUT  IF YOU  OBSERVE  HIM  FOR  A  WHILE,  YOU  REALIZE  THAT  HE  IS—A  CHILD,  FRIGHTENED, UNSURE  OF  HIS  FUTURE,  REFUSING TO THINK WHAT LIFE WOULD BE LIKE WITHOUT CHARLIE COMPANY.

I know of two other children with Charlie Company, one is eleven, and the other twelve. I don’t know their stories, but I have a good idea what may be waiting for them in the future. How many other children are there in Vietnam being employed by the U.S. Army? What will happen to them if they get their legs blown off, or blinded, or paralyzed, protecting the American soldiers for $40.00 a month? If they are killed, then this is very simple. They are buried, and in many minds, forgotten. If they live, they are an embarrassment. I realized this when I observed the reaction of the captain and the soldiers who brought Va-Han into, our centre. They felt ashamed, and so they should. I want the story of Vo-Han placed on the desk of not only the AFSC, but also on the desk of any newspaper editor who has the guts to print it, and the desks of Ambassador Bunker, President Nixon, and P .M. Wilson.

I cannot vouch for the validity of the details of Vo-Han’s story, I can only report it as it was told to me by him. What I can say, without fear of contradiction, is that children are being employed by the U.S. Army, that they are being taken out on active patrols, and that their role is to help protect the lives of Gl’s.

I have two sons; the elder has just entered his eleventh year of life, but then he is white, and has round eyes, and the GI’s out here would no more think of taking him out on patrol than they would their own children. We may not be able to stop the war out here, but I think if we move quickly we can put a stop to this disgusting practice and perhaps save the future and even the lives of a few children in Vietnam.