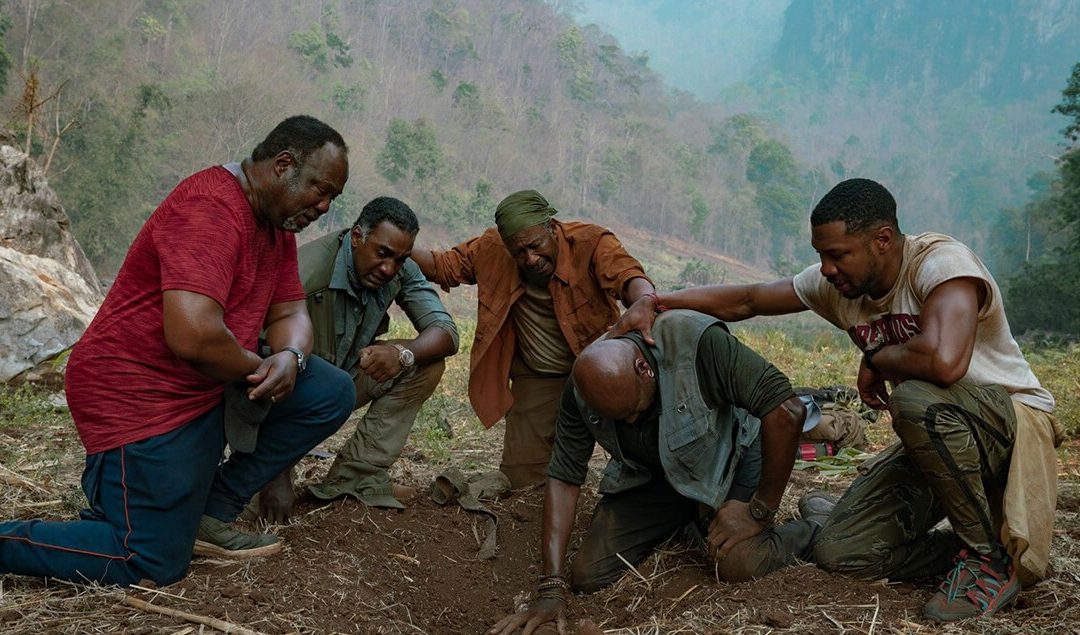 Spike Lee’s Vietnam War film Da 5 Bloods is “a condemnation of the past, a call for change, and a rich work of art worth watching over and over again,” writes Caryn James.

It’s more than a coincidence of timing that Spike Lee’s Da 5 Bloods resonates so strongly with this moment of protests for racial justice. The story of four black US veterans who return to Vietnam to recover the body of their squadron leader, the film positions itself in the long history of inequality that began with slavery and continues to this day. It would have been just as relevant at any point in the past. “We fought in an immoral war that wasn’t ours… for rights that wasn’t ours,” says Paul (Delroy Lindo), who has been psychologically devastated by his wartime experience and who becomes the deeply moving central character. Da 5 Bloods is Spike Lee at his mature best, made with his distinctive, passionate voice and kinetic artistry.

Lee’s usual mix of drama and social commentary is rooted more than ever in the harsh emotional realities of his characters here. Perhaps none of his films can equal the powerful jolt of his 1989 masterpiece Do the Right Thing, but Da 5 Bloods matches the dynamic accomplishment of 2018’s BlacKkKlansman. The new film also has an epic feel that has nothing to do with its two-and-a-half-hour length, which flies by. Its many layers examine race, history, politics and the bonds of friendship, as forged between this group of men who call each other ‘Bloods’.

They have returned to a changed Vietnam, full of McDonalds and Pizza Huts, planning to traipse into the jungle and find the body of Norm (Chadwick Boseman), seen in occasional flashbacks. In a thread that ratchets up the plot, they are also trying to recover millions of dollars’ worth of gold bars they found and buried 40 years before.

Each of the veterans has weathered the effects of the war differently. Otis (Clarke Peters), the solid leader of the group, is open-minded, reconciling, and addicted to the prescription drug OxyContin. Two characters are less developed: Eddie (Norm Lewis) has become a successful businessman, or so it seems, and Melvin (Isiah Whitlock, Jr) is a partying womaniser. Although the film is meant to be an ensemble, Paul is so complicated, and is played so powerfully by Lindo, that he becomes the focus. He suffers from PTSD, says he sees Norm’s ghost every night, and is full of rage at the world and at his son, David (Jonathan Majors), who joins the trip because he is worried that his father’s anger seems so out of control.

Lee and his cinematographer, Newton Thomas Sigel, beautifully capture the various textures of the friends’ experiences. As they venture into the jungle, carrying backpacks and a metal detector, the vast, crisply-shot open landscape becomes overgrown and shadowy. When the film moves back to the war years, we see the edges of the widescreen picture move inward, so that the flashbacks play out in a smaller, square format. The past literally recedes, with no attempt to make the actors look younger than the middle-aged men they are in the present. That choice plays as if the men have stepped into their memories. As Lee has pointed out, it also saved money.

Some of that money clearly went into the action scenes. During the war, a helicopter is shot down, and the Bloods engage in combat. In the present, they are ambushed by a band of Vietnamese who have heard about the gold, a situation that leads to questions about who betrayed that secret – and to bloody shootouts. There are overt references to other films, including a nightclub called Apocalypse Now and playful nods to the classic about gold hunting, The Treasure of the Sierra Madre. Da 5 Bloods also brings to mind, intentionally or not, The Deer Hunter, replacing its white veterans with black characters who have even more reasons to be traumatised.

Those reasons are bluntly displayed. The characters drop in references to historical figures, like the little-known Crispus Attucks, a black man who was the first casualty of the American Revolutionary War. Lee starts the film with a video montage of black leaders, from Muhammad Ali to Angela Davis, decrying the Vietnam War. At pertinent moments through the film, he drops in images from Martin Luther King, Jr’s funeral and US wartime atrocities, including the My Lai Massacre. No one ever said Lee was subtle, and these historical signposts would be clumsy in most hands, but they are part of Lee’s aesthetic, and he knows just how and when to use them.

That didacticism doesn’t get in the way of the characters or the bond the actors create so smoothly. As Otis, Peters is his usual gripping presence on screen. Lindo, given the most fraught character to work with, creates an indelible tragic figure. Paul’s role as sympathetic hero is especially unlikely because he is a Trump supporter, complete with a Make America Great Again hat. Lee’s abhorrence of Trump is well-known, and the film assumes that attitude, too. Otis says he can’t believe that his friend “voted for President Bone Spurs”, referring to the reason Trump was not drafted.

The Trump references are not asides or easy swipes at a political target. They are part of the astute psychology of Paul’s character. The film makes a strong connection between his anger at the inequality he faces every day and his support for Trump. Paul doesn’t know what to do with his righteous fury, so he lashes out at his son, votes for Trump, and eventually loses his grip on reality. The film doesn’t make excuses for Paul’s politics; it reveals what can happen when legitimate rage at injustice is misdirected.

Lindo captures Paul’s volcanic anger, which is always near the surface, and occasionally explodes. In one especially visceral scene he delivers a monologue as he walks away from the group, wailing in emotional anguish, shouting “The Lord is my Shepherd” and going on to deliver a rant against his son, the world and the US government that poisoned its own soldiers with Agent Orange. Lee’s frequent strategy of using close-ups to focus on a character’s most painful moments is especially effective here, as Paul comes closer and closer towards the camera. Lindo makes the scene heartbreaking: when the world settles down enough to think about the Oscars, he should be on the shortlist for best actor.

As the plot develops, the men begin to argue about what to do if they find the gold. Should they use it to support black social causes, as Norm wanted them to, or should the money be theirs? Lee keeps the story and action moving, at times with a nudge. A subplot about a human rights group finding and disabling land mines is forced in, especially when its members stumble across the Bloods at a particularly opportune moment. And by the time we learn how Norm died, the reason has become a bit too easy to predict. But those are small flaws.

Da 5 Bloods is too emotionally raw and too real for a glib happy ending, but it offers some hope. The film’s very existence is bracing. It is a condemnation of the past, a call for change, and a rich work of art worth watching over and over again.