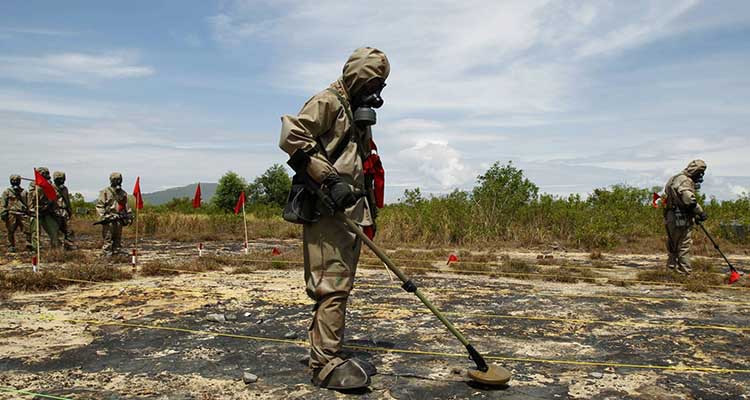 For 20 years after U.S. military veterans returned from Vietnam — where the notorious herbicide and similar exfoliants were used to expose bombing targets — claims that they and their children experienced side effects from this new giant step in military warfare were shunted aside for lack of scientific evidence.

University of South Florida Health Professor Kevin Kip has been appointed to the Institute of Medicine’s Committee to review the health effects in Vietnam War veterans of exposure to herbicides.

It wasn’t until the Agent Orange Act of 1991 that Congress took veterans’ concerns seriously enough to order an independent evaluation of what toxic chemical reactions might have occurred back in the jungle. Eventually, strong links were identified between the highly potent form of dioxin used in Agent Orange and certain types of cancers, and the public spotlight moved on.

Now, as our Vietnam vets are swiftly joining the ranks of our elders, I was surprised to learn that the research begun in 1991 has quietly continued. Every two years, the Institute of Medicine — an independent advisory organization that is part of the National Academy of Science — has been publishing exhaustive updates as more is learned about the health effects of herbicide exposure.

The latest is “Update 2012,” more than 1,000 pages of scientific scrutiny that adds strokes to the list of outcomes with “limited or suggestive evidence of an association” to chemical exposure.

University of South Florida professor Kevin Kip was asked to review this document, and now has been appointed to help draft the next one.

Kip — an epidemiologist and biostatistics professor and the executive director of the research center at the USF College of Nursing — called the painstaking work of seeking out fresh evidence “the responsible thing to do.”

“These individuals were asked to do an awful lot in service to their country,” Kip says of the Vietnam vets. “No matter which conflict it is, we’re asking our service members to be in environments that are very challenging in a number of ways.”

It’s the “fog of war” in these environments that makes piecing together the herbicide puzzle so difficult, Kip says. There’s almost no knowing what levels of exposure occurred, so forging links between Vietnam and later health conditions will probably never become open-and-shut science.

And one claim — that fathers’ exposure led to miscarriages — has pretty much been ruled out.

In between are a host of ills, 49 in all, for which evidence ranges from suggestive to inadequate. And the work goes on.

It’s slow, Kip says, but the work is advancing science and helping to change disability policy.

“I’m sometimes critical of not enough response when it looks like the public’s not being protected,” he adds. “But I do think in this instance, Congress has acted responsibly.”

After reading last week’s horror stories from a longtime Sarasota lawyer, attorney Norman Vaughan-Birch wrote to me about a client whose housekeeper saved her from giving all her money to the maitre’d of a local restaurant.

The housekeeper alerted Vaughan-Birch, who convinced the childless widow that she was being taken advantage of, and she was better off leaving her fortune to a favorite charity.

Vaughan-Birch thought he had persuaded his client to be prudent with her money. But that was the last time he ever saw her.

“Whenever I called, the housekeeper always answered, and eventually told me, ‘Mrs. X has a new lawyer.’ I think we all know what happened.”