From an American soldier in Vietnam, tragedy and poetry 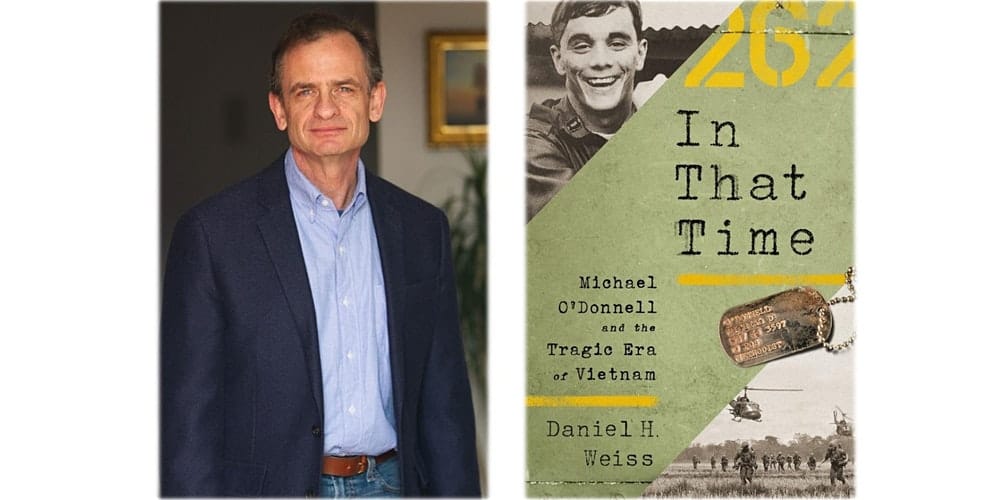 James G. Hershberg reviews the book “Michael O’Donnell and the Tragic Era of Vietnam” by Daniel H. Weiss (PublicAffairs, 2019; 202 pp.).  Hershberg is a professor of history and international affairs at George Washington University and the author of “Marigold: The Lost Chance for Peace in Vietnam.” This review was published in the Outlook section of the Washington Post on December 27, 2019.

On Nov. 15, 1969, half a million or so people (estimates vary) jammed the Mall to demand an end to the Vietnam War. Exactly a month earlier, on the first Moratorium Day, antiwar protests had taken place in cities and on campuses around the country. For the second, students and activists converged on Washington for the largest demonstration ever against the war and, for that matter, still the largest political rally in U.S. history. On that cold, clear Saturday — as, inside the besieged White House, Richard Nixon supposedly relaxed watching college football on television — they marched down Pennsylvania Avenue, cheered speeches around the Washington Monument, chanted slogans, sang songs and sometimes confronted police, the stench of tear gas mingling with other aromas typical of the era’s large youthful gatherings, such as the Woodstock concert a few months before.

Michael O’Donnell was not there, though in many ways he would have fit in just fine. He had just turned 24 and was an introspective poet and guitar-strumming folk musician and songwriter, inspired by bards and troubadours like Dylan, Baez, Simon and Garfunkel, and Peter, Paul and Mary, eager to make his mark and use his talents to entertain crowds and disentangle complex truths and emotions. His artistic ambitions had already yielded a folk music album, “The Kingsmen Five” (together with his friend and collaborator, Marcus Sullivan), containing several of his songs, and a not-yet-published poetry collection, “An Ice Cream Season.” He had grown up in the Midwest, attending college in Wisconsin and Illinois, close enough to join the hordes of contemporaries thronging the nation’s capital.

But O’Donnell had other obligations that fall of 1969. At the beginning of October, he had shipped out to Vietnam. Now he was based in South Vietnam’s central highlands, near the borders with Laos and Cambodia. A pilot in the 170th Assault Helicopter Company in Pleiku (later Kontum), he flew harrowing Huey chopper missions in support of combat operations, mostly transporting casualties from the battlefield, daily witnessing and experiencing the war’s dangers and horrors. How did this creative ’60s teenager end up in the jungles of Southeast Asia? How did he die there? And what did the story of this poet-soldier say about that tumultuous, tragic time and the still-contested history of the Vietnam War?

In his short book “In That Time,” Daniel H. Weiss sensitively recounts O’Donnell’s truncated life and assesses the war that so traumatized America (and devastated Vietnam) a half-century ago. O’Donnell loved literature, poetry and music, but did not thrive in college. As U.S. involvement in Vietnam spiked, reaching 200,000 troops by 1966, O’Donnell felt the draft closing in. After it claimed Sullivan, he enlisted in the Army to become an officer and a pilot, hoping that the war would end before his intensive flight training finished. It didn’t.

Once in Vietnam, flying a grueling regimen, Capt. O’Donnell quickly came to question the war’s morality — and his own prospects for surviving it. The poems he scribbled in spare hours, intended to become a book (“Letters From Pleiku”), circulated among soldiers after his death like precious samizdat. “Each of us is a can of tomato paste,” he reflected in one poem around the time his contemporaries gathered on the Mall; in another he noticed the “void” of a dead fellow soldier “sticking to my ceiling and the screens in the windows of my room.” In December, he wrote:

I’m not so proud

of everything I’ve done.

I mean I’ve let some

there’s so many things

God knows I’m not so

He also knows why

are bleeding to death

how we can wash the

and just one day later

Though a relic of a poisonously polarized moment, O’Donnell’s memory offers a sadly unifying lens for readers who recall those passionate days. Hawks can claim him as a genuine war hero, who not only served courageously but gave his life selflessly trying to save comrades. The book vividly evokes his doomed mission, on March 24, 1970, to rescue eight soldiers trapped in the Cambodian jungle with enemy forces closing in; he retrieved them from a “hot” landing zone, but his helicopter then was shot down, crashed, exploded and burned. For those in the counterculture, who questioned authority, who embraced experience and art, O’Donnell was a promising, talented voice — no radical or revolutionary, but implicitly challenging the establishment values of power and money and, ultimately, the rationale, even rationality, of the war he was sent to. Who knows where his art (or his politics) might have gone had he survived? (Samples of his poetry and music can be found at InThatTime.com.)

Above all, though, he was one of more than 58,000 Americans, and millions of Vietnamese, whose lives the war cut short — and Weiss’s poignant tale reminds us that the bleak statistics of any war conceal myriad individual tragedies that endure long after the conflict formally ends. (In O’Donnell’s case, the suffering of those left behind was exacerbated by the microscopic hope and inevitable red tape of his being officially “missing in action” — it took years before he was declared dead and decades before an arduous on-the-ground investigation of the crash site found definitive evidence of his fate.)

Weiss, head of the Metropolitan Museum of Art, is not a professional historian, and some may differ with a few of his claims. For example, arguments persist over Ho Chi Minh’s relative priorities of nationalism as opposed to communism or global revolution, and over whether the war, from Washington’s perspective, was in any plausible sense “winnable.” Yet what seems hardly disputable is that American decision-makers, both Republicans and Democrats, civilian and military, vastly exaggerated Vietnam’s strategic importance in the Cold War to rationalize a grossly disproportionate U.S. involvement. The domino theory, first articulated by Dwight Eisenhower, was echoed by John Kennedy and Lyndon Johnson and their underlings to justify a massive military commitment to Saigon — yet when the biggest Southeast Asian domino, Indonesia, fell resoundingly and brutally in a pro-American, anti-communist direction in late 1965, no one bothered to recalibrate the stakes in Vietnam. Nor did surrounding countries topple after communists took over South Vietnam, Laos and Cambodia a decade later.

Another alleged reason for sending young Americans to kill and die in Vietnam was fear that a communist victory would extend the reach of Mao Zedong’s China. But only a few years after Saigon fell (or was liberated, depending on your view), a nasty border clash erupted between Beijing and Hanoi, suggesting that more than 2,000 years of nationalist rivalry cut far deeper than a tenuous ideological bond. By then, of course, the Sino-American opening had made the China peril moot, since a de facto Washington-Beijing alignment against Moscow now existed. Most important, America’s costly defeat in Vietnam hardly influenced the broader Cold War’s trajectory or ultimate destination, which was far more decisively swayed by decades of internal Soviet (and communist) dysfunction and a widening chasm in soft power (quality of life, ideas, consumer and popular culture, etc.) between East and West.

One can argue whether or not American soldiers in Vietnam died in vain, in a losing cause, but their lives still mattered. Surrounded by death, a few months before his own, O’Donnell wrote a poem that speaks to our times, from those lost in all wars, on all sides:

If you are able

Save a place for them

And save one backward glance

When you are leaving

For the places they can

Be not ashamed to say

Take what they have left

And what they have taught you

And in that time

When men decide and feel safe

To call the war insane,

Take one moment to embrace