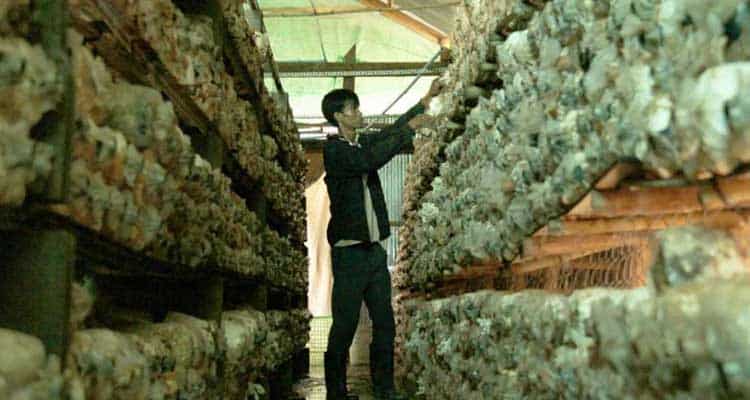 Ever since the war, Quang Tri Province’s poor have made a dangerous living selling the unexploded remains of the US’s mammoth bombing campaign, but a new program gives them a safer option – planting fungi.

“Growing mushrooms suits the disabled victims of bombs – those with disabilities and poor health,” said Do Thien Dang who lost his legs in an accident caused by unexploded ordnance (UXO).

The 50-year-old grows mushrooms three months a year, earning VND6 million (nearly US$300) during that period, under the Norway-funded project Restoring the Environment and Neutralizing the Effects of the War (RENEW).

Project RENEW was founded in 2001 and is now primarily donated by the Norwegian People’s Aid (NPA).

He said many families in Trieu Phong District have been instructed to plant different kinds of fungi, including the red lingzhi mushrooms, which can fetch VND600,000 a kilo.

“The mushroom green house and the materials are provided by the program. It also buys our products.”

During a recent visit, the scaffolds on the farm were used as bamboo frames to hold the flowers he sells to neighbors celebrating birthdays, weddings or funerals.

He buys bamboo from a nearby villages and sells his final products to familiar dealers.

He used to make bamboo baskets and the like but they couldn’t compete with plastic ones, so he started to turn the kitchen tool into a decoration, he said as he whittled away at strips of bamboo.

His work earns the family enough for daily meals, while his wife works in the fields to pay their children’s tuition.

Dang brightened up at the topic of schooling, proudly announcing that his daughter is attending a teacher’s college.

He also pointed to a special three-wheel motorbike designed for disabled people that he drove over the famous Hai Van Pass to bring his daughter to Da Nang for her college entrance exam.

Men sweet a field for UXO to sell for scrap in Quang Tri, the province with the highest concentration of explosive remnants from the Vietnam War. Photo credit: Tuoi Tre

Quang Tri was a center for American military bases during the peak of the Vietnam War and a principle battleground during the 1968 Tet Offensive.
It is the most devastated locality in the country in terms of explosive remnants from the war.

Around 400,000 pieces of unexploded ordnance (UXO) are believed to remain buried across 480,000 hectares of land in Quang Tri.

UXO can be found in residential areas, gardens and even under the floors of houses.

Official statistics listed more than 7,000 people including children as victims of UXO accidents in the province between 1975 and 2011.

In many areas across Quang Tri, almost every family has a member who was killed by bombs and mines during peace time. Many tried to make ends meet by salvaging scrap metal with UXO bombs discovered with metal detectors and dismantled with saws and hammers.

The collectors earn anywhere from VND50-200,000 a day and pass the practice down to each other.

No one receives professional training in explosive deactivation.

Le Van Hoang from Cam Lo District said the job “is nothing complicated.”

“Just bang the hammer right at the separation between the warhead and the bomb body, and then you can take the explosive, the iron, steel, and bronze. Everything can be sold.

“You just have to get used to it.”

It takes more than getting used to.

Ta Thi Thanh from Hai Thai Commune of Gio Linh District lost both her husband and son to UXO.

Thanh said she tried to stop them from harvesting bombs both times, but she failed to convince them as she couldn’t offer any alternative means of earning a livelihood.

Locals recalled the day they held five funerals in the village, all caused by UXO.

Doan Thi Muon, whose family member was among the victims, told Tuoi Tre she has considered giving up UXO salvaging to start growing mushrooms.

Her colleagues Nguyen Thi Lien, Hoang Kim Phuong, who were both damaged by UXO explosions to some extent, have the same plan.

Ngo Xuan Hien, a spokesperson for the project, said Project RENEW has disbursed nearly US$1 million and had helped outfit 193 families with mushroom farms by March.

The project is supported by the Taiwanese foreign ministry, Australian veterans and the Japanese Embassy in Vietnam.

The project aims to assist all disabled people, those with poor health, and ethnic minorities in the province.

Hien said the technology was developed by Dr Ta Nhan Ai from the province’s Science and Technology Department, to help locals overcome the harsh weather of the central region.

The project will finish next year, but Hien said that the communities will continue to breed mushrooms.

“All the necessary supplies and technology will be delivered to the Quang Tri Department of Science and Technology and will continue to help struggling residents of the province make a living from fungi,” Hien said.

International NGOs have made many efforts to clear war-era bombs and mines in central Vietnam in recent years.

Since May 1998, organizations from Germany, the US and other countries, including NPA, SODI, PeaceTrees Vietnam, CPI, and MAG, have destroyed more than 370,000 UXO area of 5,600 hectares in Quang Tri at a total cost of $25 million.

German SODI also drew public attention in Berlin during a photo exhibition held to highlight its decade of work in Quang Tri.