G.I.s ‘Without a Country,’ Protesting the Vietnam War 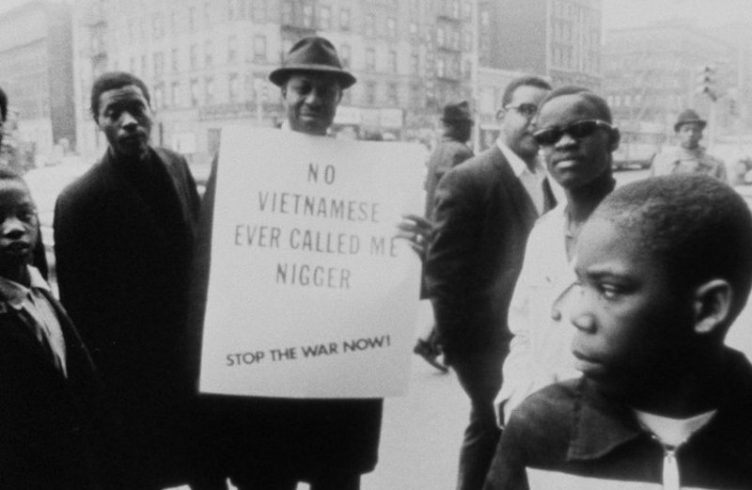 Image: The struggle for racial equality and the anti-Vietnam War movement are paralleled in David Loeb Weiss’s 1968 documentary, which includes footage and interviews from an antiwar protest in Harlem. Credit Anthology Film Archives and the Smithsonian’s National Museum of African American History and Culture.

On April 4, 1967, the Rev. Dr. Martin Luther King Jr. took the pulpit at Riverside Church in Manhattan and made his strongest denunciation yet of the Vietnam War; a year later to the day he was assassinated in Memphis. King does not appear in David Loeb Weiss’s “No Vietnamese Ever Called Me Nigger” but this searing 1968 documentary feature is informed by both events.

Restored by Anthology Film Archives and the Smithsonian’s National Museum of African American History and Culture, “No Vietnamese” is a historical document with contemporary relevance. This weekend it will be shown twice at Anthology in a terrific 16-millimeter print.

The film alternates between footage taken on April 15, 1967, at the Spring Mobilization to End the War in Vietnam march in New York, which King addressed, and interviews with three Vietnam veterans, filmed less than a month after King’s death. “I’m a man without a country,” one of the interviewees quotes a fellow G.I. as saying, having been radicalized by his war experience.

According to its organizers, the New York mobilization attracted 400,000 marchers. (The police and The New York Times estimated between 100,000 and 125,000.) Weiss and his crew followed the 1,500-strong Harlem contingent, led by the Student Nonviolent Coordinating Committee chairman, Stokely Carmichael, with whom King had to be persuaded to share a platform. Carmichael’s black power position is clear when his followers refuse to let a white Harlem resident join the march.

The filmmakers stand in for the white power structure, eliciting all manner of frank comments from marchers and onlookers: “Why should we fight for you? You got it all.” Intermittently, the three G.I.s give detailed testimony regarding the Army’s pervasive inequality. One who studied to be an air traffic controller at a Southern base was banned from his squad’s graduation party; once in Vietnam he was assigned to be a driver, but when he complained he was sent into the field. All three men — Dalton James, Preston Lay Jr. and Akmed Lorence — were radicalized, expressing alienation from the Army and identification with the Vietnamese.

The movie is alive with incidents. Several youthful observers of the march, followers of Elijah Muhammad, leader of the Nation of Islam, disdainfully tell the filmmakers that, as Muslims, they don’t need to demonstrate (“We respect the government”) while, several blocks along, in front of a tavern, people enjoy a spring afternoon ragging on the war as the Supremes blast out of the jukebox. In Midtown, the irate white counter-demonstrators include members of the National Renaissance Party, bedecked with crypto-fascist imagery like swastikas and “Bomb Hanoi” pins, coolly explaining their nativist ideology.

The filmmakers give the G.I.s the final word. One, who suffers from a stutter, becomes increasingly eloquent as he grows more militant. It’s almost a metaphor. The movie ends with a long, seemingly extemporaneous speech which, as passionate as it is lucid, another vet analyzes the situation of American blacks with a mounting fury, challenging the camera: “How can you tell me it’s too much to ask to be a human being?”

Weiss, who died in his early ’90s in 2005, was born in Warsaw and immigrated to the United States as a child. He was, among other things, a founding member of the Socialist Workers Party and a proofreader for The New York Times; he rode the rails during the Depression and, well into his 50s, studied filmmaking at New York University, recruiting his crew among his fellow students. (Michael Wadleigh, who later directed “Woodstock,” is one of the cameramen.)

“No Vietnamese” was shown at the 1968 New York Film Festival as part of a sidebar devoted to “Film-makers on New Life-Styles.” It seems never to have had a commercial opening, at least in New York, but was shown widely at colleges and G.I. coffee houses. The movie’s title, itself a potent form of political enlightenment, was taken from the printed placards that the SNCC marchers carried — although the sentiment is so closely associated with Muhammad Ali, who refused induction into the Army on April 28, 1967, but never actually said it, that some assumed that Weiss’s movie was about Ali. It’s not but it also packs a wallop.

Previous post:
My Tet Remembrance, Jan. 31, 1968…. Next Post:
Hue Prepared for a Holiday, Then the War Came