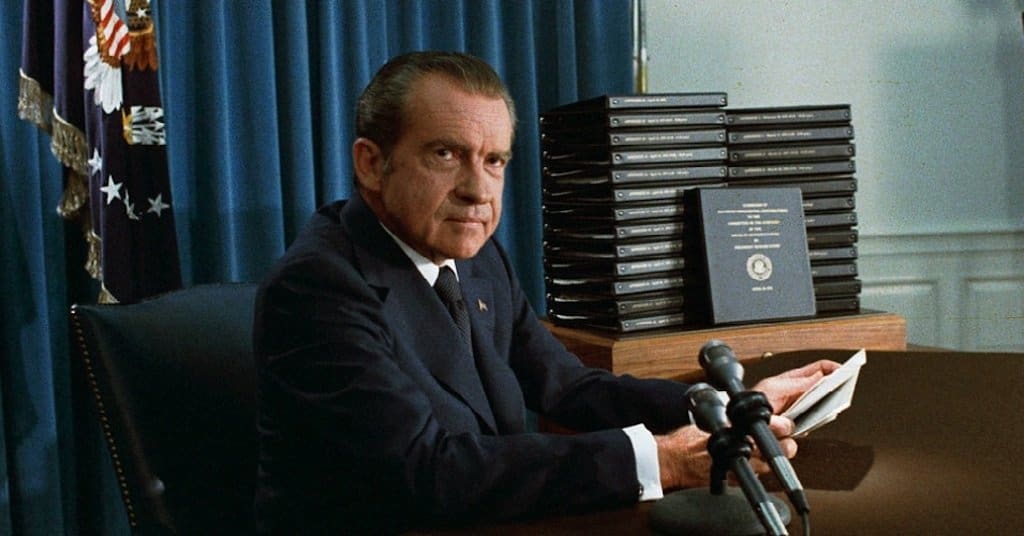 BOB FITRAKIS AND HARVEY WASSERMAN ON BUZZFLASH AT TRUTHOUT

Richard Nixon was a traitor.

The new release of extended versions of Nixon’s papers now confirms this long-standing belief, usually dismissed as a “conspiracy theory” by Republican conservatives. Now it has been substantiated by none other than right-wing columnist George Will.

Nixon’s newly revealed records show for certain that in 1968, as a presidential candidate, he ordered Anna Chennault, his liaison to the South Vietnam government, to persuade them to refuse a cease-fire being brokered by President Lyndon Johnson.

Published as the 40th Anniversary of Nixon’s resignation approaches, Will’s column confirms that Nixon feared public disclosure of his role in sabotaging the 1968 Vietnam peace talks. Will says Nixon established a “plumbers unit” to stop potential leaks of information that might damage him, including documentation he believed was held by the Brookings Institute, a liberal think tank. The Plumbers’ later break-in at the Democratic National Committee led to the Watergate scandal that brought Nixon down.

Nixon’s sabotage of the Vietnam peace talks was confirmed by transcripts of FBI wiretaps. On November 2, 1968, LBJ received an FBI report saying Chernnault told the South Vietnamese ambassador that “she had received a message from her boss: saying the Vietnamese should “hold on, we are gonna win.”

As Will confirms, Vietnamese did “hold on,” the war proceeded and Nixon did win, changing forever the face of American politics—-with the shadow of treason permanently embedded in its DNA.

The treason came in 1968 as the Vietnam War reached a critical turning point. President Lyndon Johnson was desperate for a truce between North and South Vietnam.

LBJ had an ulterior motive: his Vice President, Hubert Humphrey, was in a tight presidential race against Richard Nixon. With demonstrators in the streets, Humphrey desperately needed a cease-fire to get him into the White House.

Johnson had it all but wrapped it. With a combination of gentle and iron-fisted persuasion, he forced the leaders of South Vietnam into an all-but-final agreement with the North. A cease-fire was imminent, and Humphrey’s election seemed assured.

But at the last minute, the South Vietnamese pulled out. LBJ suspected Nixon had intervened to stop them from signing a peace treaty.

According to Hersh, Nixon “was able to get a series of messages to the Thieu government [of South Vietnam] making it clear that a Nixon presidency would have different views on peace negotiations.”

Johnson was livid. He even called the Republican Senate Minority Leader, Everett Dirksen, to complain that “they oughtn’t be doing this. This is treason.”

“I know,” was Dirksen’s feeble reply.

Johnson blasted Nixon about this on November 3, just prior to the election. As Robert Parry of consortiumnews.com has written: “when Johnson confronted Nixon with evidence of the peace-talk sabotage, Nixon insisted on his innocence but acknowledged that he knew what was at stake.”

Said Nixon: “My, I would never do anything to encourage….Saigon not to come to the table….Good God, we’ve got to get them to Paris or you can’t have peace.”

In the four years between the sabotage and what Kissinger termed “peace at hand” just prior to the 1972 election, more than 20,000 US troops died in Vietnam. More than 100,000 were wounded. More than a million Vietnamese were killed.

But in 1973, Kissinger was given the Nobel Peace Prize for negotiating the same settlement he helped sabotage in 1968.

According to Parry, LBJ wanted to go public with Nixon’s treason. But Clark Clifford, an architect of the CIA and a pillar of the Washington establishment, talked Johnson out of it. LBJ’s close confidant warned that the revelation would shake the foundations of the nation.

In particular, Clifford told Johnson (in a taped conversation) that “some elements of the story are so shocking in their nature that I’m wondering whether it would be good for the country to disclose the story and then possibly have [Nixon] elected. It could cast his whole administration under such doubt that I think it would be inimical to our country’s best interests.”

In other words, Clifford told LBJ that the country couldn’t handle the reality that its president was a certifiable traitor, eligible for legal execution.

Fittingly, Clark Clifford’s upper-crust career ended in the disgrace of his entanglement with the crooked Bank of Credit and Commerce (BCCI), which financed the terrorist group Al Qaeda and whose scandalous downfall tainted the Agency he helped found.

Johnson lived four years after he left office, tormented by the disastrous war that destroyed his presidency and his retirement. Nixon won re-election in 1972, again with a host of dirty dealings, then became the first America president to resign in disgrace.