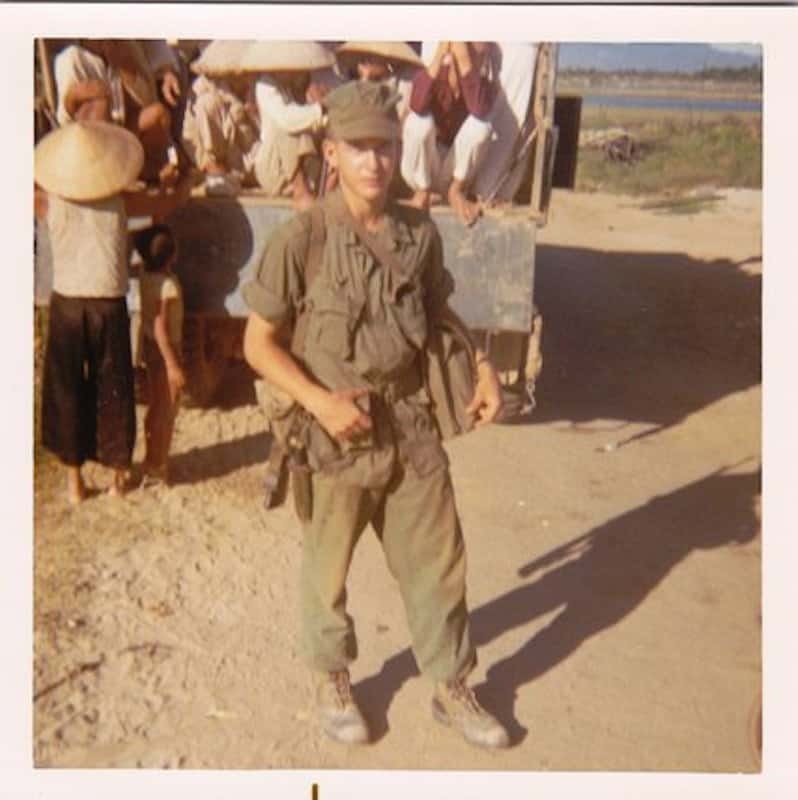 I arrived in Vietnam in early February 1967 and was assigned to First Battalion, First Marines. After falling away from the church in my midteens, I’d had a religious reawakening at Parris Island, where I found myself much in need of God’s mercy because we got none from our drill instructors. I took my renewed religious fervor to Vietnam with me, and soon got to know our battalion chaplain, a Jesuit priest, pretty well.

Many months later, in November, the battalion was on an operation near the DMZ. Night was approaching, and I was digging in when Father Lyons came by. The conversation, which I still remember vividly, went something like this:

“You know, Corporal, I don’t mean to put you on the spot, but I do miss the talks we used to have when you first got here. You were more faithful than my Catholic boys,” he said with a laugh.

“What’s wrong, Father? Take a look around. And you’re asking me what’s wrong? Look, I’m sorry, sir. I’d rather not get into it.”

“Of course. Making me an officer wasn’t my idea.”

“Not at all, son. We all want to believe we’re doing the right thing.”

“Well, I don’t believe it anymore. I don’t know what I believe, but I sure don’t believe that. We’re not doing anybody any good around here, and any fool can see that. Well, anyway, the thing is, there I’d be, going to chapel every week and praying to God to forgive what I’m doing, knowing all the time I was just gonna go out and do more of the same thing the next day. Father, any God worth his salt isn’t gonna buy that for a minute. It got to where I could almost hear him up there while I was praying: ‘Don’t hand me this crap again, Ehrhart. Just don’t bother me unless you’re serious.’ After awhile, every time I’d try to pray, there’d be that Voice.”

“God’s always ready to listen, son. He’s always been ready to comfort people like us, and he still is. I really don’t mean to preach a sermon at you, but you mustn’t let your own fear keep you from him.”

“Father, that’s not right. You can’t just say you’re sorry, and then go out and deliberately keep doing the same stuff over and over again. You got no business telling guys like me it’s O.K. to deal like that.”

“I’m not saying it’s O.K., Corporal Ehrhart, and I never have. I can’t presume to judge men. But you boys are as much a part of Jesus’ flock as anybody else. Maybe you’re the part he cares about most. Jesus broke bread with publicans and sinners, didn’t he? Can I do any less, and still be a priest?”

“Well, if you’re just here to look after us sheep, how come you got that?” I pointed to the M-16 Father Lyons held.

He looked down at the weapon and shook his head slowly. “I’d be happy not to have to carry one of these, and I hope I never have to use it,” he said, “but I’m afraid the VC don’t make exceptions for Catholic priests.”

“You’re right, of course,” said Father Lyons. “But it’s just not that simple. Nobody’s perfect, son. We’re all human beings. God made us in his image, and he knows we’re going to fall. That’s what Jesus Christ is all about.”

“That just don’t get it, Father. These guys believe in you. They trust you. You tell ’em they’re gonna be forgiven, and they just keep praying and shooting and praying and shooting, and thinking they’re gonna go to heaven. You think God gives a big rat’s ass about Communism and democracy and domino theories? I just hope to high heaven there ain’t any God, because we’re all in a whole lot of trouble if there is.”

“Corporal Ehrhart, have you ever thought about applying for a discharge as a conscientious objector?”

“Oh, no. No way. End up in Portsmouth Naval Prison for 20 years? I’ve got enough trouble as it is. I’ve got four more months to go in this cesspool, and then I’m outta here.”

“But if you’re really this troubled, maybe I can help you. I can talk to Colonel Gravel.”

“Listen, Father, you said I could talk straight with you, so I am. But this is just between you and me, and I’m trusting you to keep it to yourself. I’ve got a good record, and I want to keep it that way. It’s gonna be hard enough to live with myself for the rest of my life. And then get drummed out of the service on top of that? I’m not gonna hang that albatross around my neck. No, sir.”

Father Lyons sighed deeply. “Well, that’s your decision,” he said. “If you change your mind, let me know. But think about this, will you? Don’t let what men do in God’s name turn you away from God’s love. Just because we fail to live up to what God asks of us doesn’t mean he won’t forgive us. It’s God’s world, after all. He knows what we’re up against.”

“Well, that’s a heck of a way to send somebody to sea, isn’t it, sir? Knock a hole in the bottom of the lifeboat, and then tell ’em, ‘Do the best you can, folks. Good luck.’ ”

“I’m afraid I just can’t seem to find the right things to say to you, can I?”

“I’m sorry, too, son,” said Father Lyons, his voice sounding very tired and lonely. “I just don’t have all the answers. God works in mysterious ways sometimes, I suppose. Let me know if you change your mind.”

But I did not change my mind. At that stage of my life, C.O. didn’t mean “conscientious objector.” It was only the first two letters of “coward.”

Later on that same operation, I lost my dog tags. When we got back to battalion, I had the company clerk make me a new set. On the line for religion, which originally read “UCC” for United Church of Christ, I had him put “None.”

I still have those dog tags. But I’ve spent 50 years wondering if and how my life would be different if I had had the courage to take Father Lyons up on his offer.