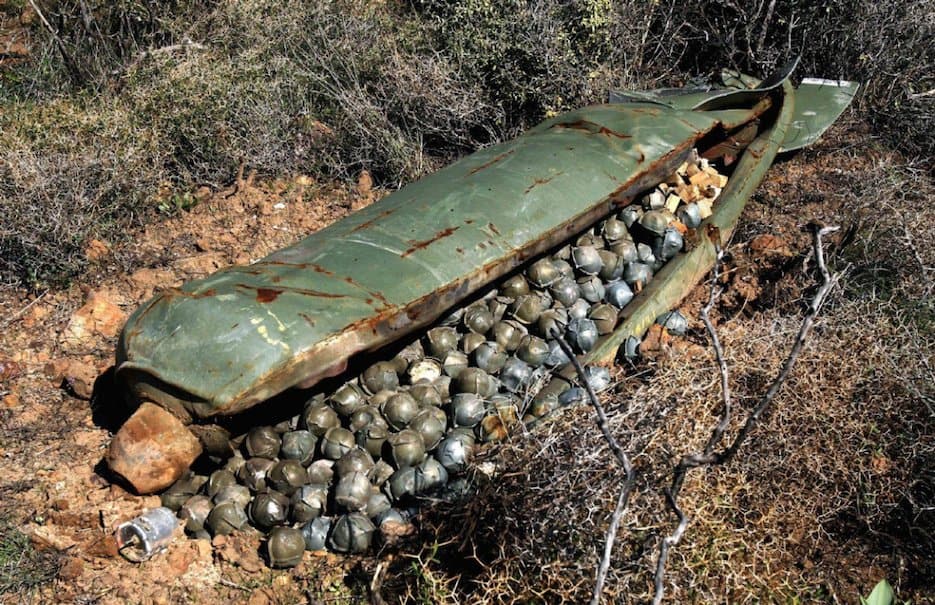 This article originally appeared at peaceblog.wordpress.com

On Tuesday, Textron — the last U.S. weapons company making cluster bombs, a deadly indiscriminate weapon that’s made headlines in the past year for killing and maiming hundreds of civilians in Yemen’s civil war —announced that it will no longer manufacture them. A spokesperson for the company explained their reasoning in business terms:

Historically, sensor-fuzed weapon (a type of cluster bomb) sales have relied on foreign military and direct commercial international customers for which both executive branch and congressional approval is required… The current political environment has made it difficult to obtain these approvals.

Let’s unpack what they meant by “current political environment.” Earlier this year, Human Rights Watch (HRW)and Amnesty International both documented that a U.S.-backed Saudi-led military coalition that intervened in Yemen’s civil war in March 2015 had used U.S.-made cluster bombs on civilian areas of Yemen, use which amounted to war crimes given the indiscriminate nature of these weapons.

Thanks to these rights groups documenting the coalition’s use of American-made cluster bombs and a grassroots campaign raising awareness and opposition to their use, President Obama suspended the transfer of cluster bombs to Saudi Arabia in May. In June, Rep. John Conyers (D-MI) introduced an amendment to a defense authorization bill to make that suspension permanent, which narrowly failed in a vote of 204-216.

In July, Massachusetts Peace Action (MAPA) led a protest outside of a Textron subsidiary in Wilmington, Massachusetts calling attention and scrutiny to the last remaining company in the U.S. still producing these weapons. Cole Harrison, executive director of MAPA, was interviewed at the protest and called on Massachusetts legislators to support legislation to block weapons sales to Saudi Arabia, and to push for the U.S. to join the Convention on Cluster Munitions, an international treaty signed by 119 states that bans the use, transfer, stockpiling, and manufacturing of cluster bombs. MAPA also produced a video, shown above, that called out Textron for its production of these weapons and helped mobilize the public to take action on this critical issue.

To make matters worse for the political environment, not to mention Yemeni civilians, throughout the month of August, the Saudi-led coalition has been making headlines on a near-daily basis for launching airstrikes on civilian targets, including a school, a marketplace, a food factory, and a hospital supported by Doctors Without Borders. Capping off the month of August as a bad month for weapons manufacturers, on the same day that Textron announced it was ending production of cluster bombs, 64 House representatives sent a letter to the President asking for a delay in the transfer of another $1.15 billion in weapons to Saudi Arabia in order to give Congress adequate time to debate the merits of such an arms deal. Peace Action helped gather signatures for the letter by lobbying Congress and mobilizing our grassroots base to get in touch with their representatives and ask them to sign on to it.

So just to be clear, all of that is what Textron’s spokesperson managed to condense into “the current political environment.”

Now that the use, transfer, and manufacturing of cluster bombs has become more stigmatized in the U.S. (as the Pentagon feared would happen if too many representatives supported the amendment to suspend their transfer to Saudi Arabia), the time is ripe to stigmatize them further. Congress and the President can take steps to do just that. Lawmakers should speak out in the media and on the floor of Congress in favor of joining the Convention on Cluster Munitions, and President Obama should commit the U.S. to accede to the convention.