Greek Fighter who Became Hero in Vietnam Passes Away 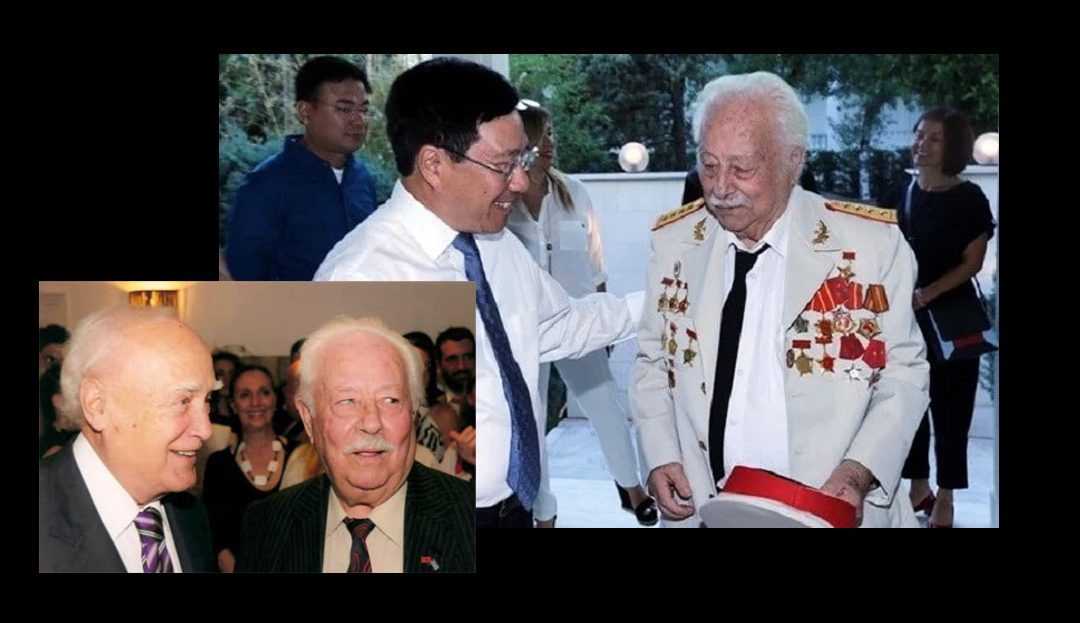 by Tasos Kokkinidis at the Greek Reporter

Kostas Sarantidis, the Greek fighter who escaped from the Nazi labor camps during the Second World War to become a national hero in Vietnam, passed away on June 25 in Athens. He was 94.

He was the sole foreigner who was honored with the title of Hero of the People’s Armed Forces of Vietnam.

“Kostas Sarantidis’s life is tied in with the heroic moments of the Vietnamese people,” said Vu Binh, Vietnamese Ambassador to Greece.

He was born in 1927 in Thessaloniki, to Asia Minor refugees. In the autumn of 1943 and during the Axis occupation of Greece in World War II, he was arrested selling smuggled tobacco and was sent on foot to Nazi forced labor camps in Germany.

He managed to escape near Vienna and stole a military uniform which he used to disguise himself as a German until the end of the war.

After the end of the war, Sarantidis went to Rome, and tried to be repatriated to Greece. This, however, proved impossible as he lacked any identity documents. Without any means of supporting himself, Sarantidis was lured into the French Foreign Legion by the prospect of living an adventurous life and meeting beautiful women.

After joining the legion, Sarantidis was initially moved to Algeria and landed to Indochina in 1946. While there, he and the other legionnaires were told that the duration of their deployment would be short and that their mission would be to disarm the Japanese and restore order.

Sarantidis disliked the oppression of the local population by the French colonial troops. After two months with the Legion, he contacted Viet Minh spies and defected to them, carrying with him his rifle and a machine gun.

He was given the name Nguyễn Văn Lập and served in various posts, participating in many battles. Eventually he rose to the rank of captain. In 1949, he was admitted to the Communist Party of Vietnam.

After the end of the war in 1954 and the division of Vietnam into northern and southern zones, Sarantidis moved to North Vietnam and retired from the army. At that time, he was married to a nurse who was accused of reactionism and was imprisoned.

Sarantidis worked as a German translator and later as a miner. He also remarried to a Vietnamese woman, with whom he had three children.

From the day he was arrested in Thessaloniki until the early ’50s, Sarantidis had not communicated with his family who presumed him dead. Near the end of the war, he started to exchange letters with them and in 1965, he decided to return to Greece.

With the aid of one of his brothers, who helped the Sarantidis family to be issued passports, Sarantidis moved to Thessaloniki.

While in Greece, Sarantidis joined the Greek Communist Party and worked for helping Vietnam as well as promoting Greek-Vietnamese relations. Sarantidis has also been active in helping children in Vietnam who have been affected by the Agent Orange/dioxin toxicant.

Sarantidis escorted the then Greek President Karolos Papoulias on his official visit to Vietnam in October 2008.

In 2010, Sarantidis was given the Vietnamese citizenship and a passport. In 2013, he was named a Hero of the People’s Armed Forces. Additionally, he has been awarded several honorary titles by both the Vietnamese Party and State, including the Friendship Order in 2011, the Victory Medal, Third Class and the Resistance War Medal, Second Class.