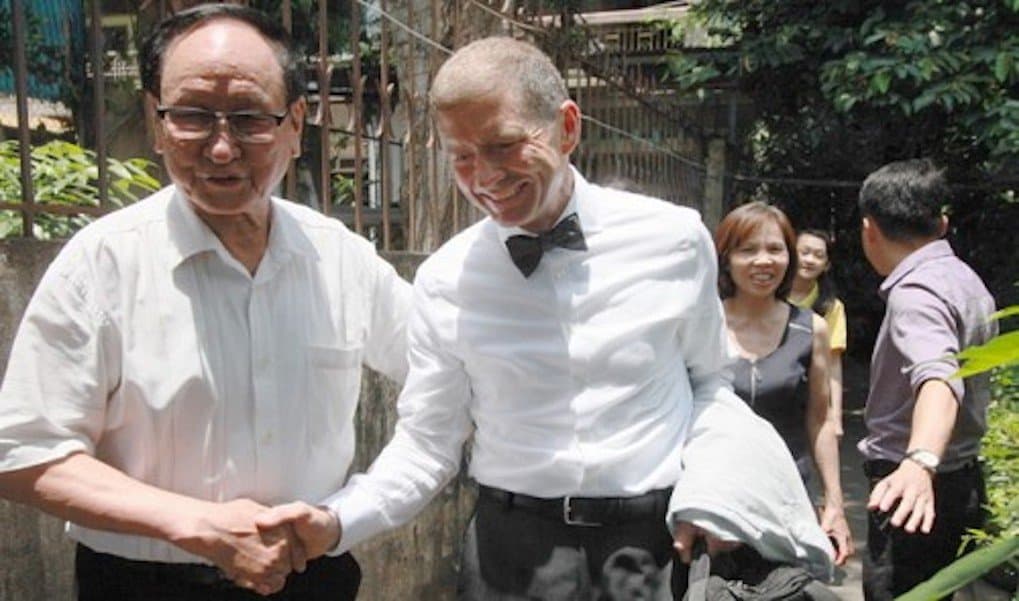 This article originally appeared at TalkVietnam.com

An unusual meeting took place on Monday in the coastal city of Hai Phong in northern Vietnam between the son of a former U.S. prisoner of war (POW) and the Vietnamese prison warden who kept a watch on his father.

The warden in question was Senior Colonel Tran Trong Duyet, who was in charge of Hoa Lo Prison in Hanoi from 1968 to 1973.

Initially constructed and used by French colonialists to hold political prisoners, Hoa Lo Prison later came under the authority of the Democratic Republic of Vietnam government following the French withdrawalfrom Indochina in 1954.

On Monday morning in his small house in a collective living quarter of the Sixth Naval Battalion in Hai Phong City, Duyet welcomed a special guest, the son of one of his prisoners during the American war in Vietnam, who had visited the country to fulfill his father’s dying wish.

The F-4 fighter-bomber operated by U.S. Lieutenant Colonel Walter Eugene Wilber was downed on June 16, 1968 while on a flying mission over Do Luong District in Vietnam’s north-central Nghe An Province.

Wilber survived by ejecting himself from the aircraft, but was taken captive by the Vietnamese and later transferred to Hoa Lo Prison to be held as a prisoner of war.

“That’s Lieutenant Colonel Walter!” Duyet exclaimed the instant he saw a black-and-white photo of Wilber taken in prison presented to him by the pilot’s son Thomas Eugene Wilber.

Now 83 years old, Duyet still has memories of being a warden at Hoa Lo Prison, images and stories rushing back to him upon seeing the photo.

Duyet told Wilber Jr. that it was his father’s courtly, disciplined, and gentlemanly-like manner, even inprison, that had made a good impression on him.

Wilber Sr. was among the first U.S. prisoners to speak up against the unjust American war in Vietnam.

A soldier himself who had served over 20 years in the U.S. Navy, Wilber Jr. said this was the eighth time he had visited Vietnam to explore the destinations and people that had once been a part of his father’s life.

The trip, he said, was also to fulfill his father’s dying wish of thanking the Vietnamese warden who had taken good care of him and his fellow U.S. prisoners, who were held captive in Hoa Lo Prison during wartime.

Flipping through the old photos taken with his prisoners before they boarded the plane to be returned to their home country, Duyet said he had been chosen to be the warden of Hoa Lo Prison thanks to his physique and diplomatic style, as well as his experience in prison management.

Wilber Jr. took special interest in stories about the treatment of POWs like his father during their captivity.

On one occasion, his father and other prisoners were dressed up in suits and ties like senior foreign delegates, and were taken on a tour led by Duyet himself to visit famous landmarks in Hanoi such as the One Pillar Pagoda and Bach Mai Hospital.

“At the time, we had a special meal for U.S. prisoners, which included bread and sweetened condensed milk for breakfast, and an extra bowl of broth soup for lunch and dinner,” Duyet recalled.

“Each prisoner’s daily portion cost VND1.6 back in those days, and it was equal to the portion for the rank of generals in the Vietnamese army. Sick prisoners got from three to four times that portion,” Duyet said.

When asked by Wilber Jr. about his reason for such good treatment of prisoners, Duyet explained simply, “Prisoners are humans, too. They have their own families who are concerned about their well-being just as much as I am about my own, so apart from taking orders from my superiors, I always saw them as members of my family. If they were beaten or tortured, it would hurt their families ten times more than it would hurt them.”

In Duyet’s opinion, it was the prisoners more than anyone else who would be the leading advocates of post-war reconciliation.

Two of Duyet’s most memorable prisoners, he said, were U.S. Senator John McCain and former U.S. Ambassador to Vietnam Pete Peterson, who had both worked incessantly to enhance Vietnam-U.S. relations after the war.

The brief meeting between two citizens of the countries that were once adversaries in the war ended with a friendly meal of ‘banh da cua’, a traditional Hai Phong noodle crab soup.

Before leaving for Hanoi to visit some other destinations prior to returning to the U.S. on Friday, Wilber Jr. presented his father’s warden with a red-and-yellow stone “representing the ever-warming relations between the two nations and peoples.”