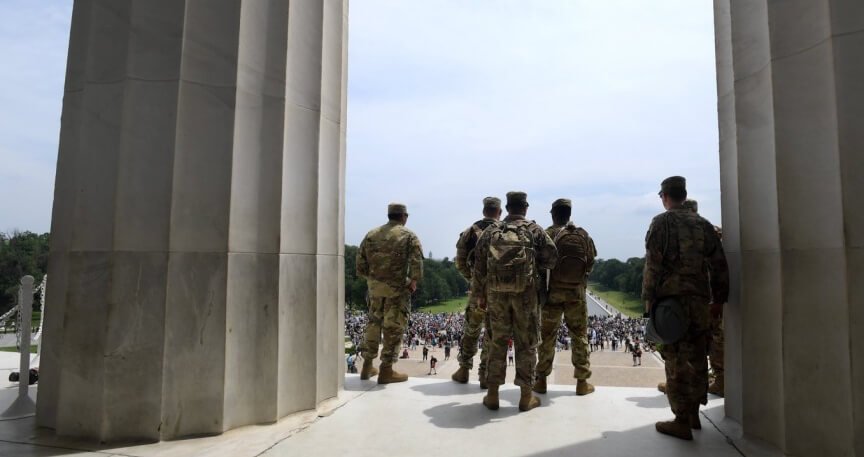 In the 1960s, the military had been illegally spying on protesters until Christopher Pyle, a former Army intelligence officer, spoke out.

“As spying on protesters highlights the extent of the surveillance state, we should remember the anniversary of another important protest: that of a single whistleblower revealing what he felt was ‘the essential apparatus of a police state’ in America.”

On August 28, tens of thousands of people gathered in Washington, D.C., to commemorate the fifty-seventh anniversary of the 1963 March on Washington for Jobs and Freedom. They protested racial inequality and listened to speakers that included Martin Luther King III and Jacob Blake Sr., the father of Jacob Blake, an unarmed Black man who was shot in Kenosha, Wisconsin, on August 23, by a white police officer.

Because this is 2020, the protesters in Washington were heavily surveilled: their faces and bodies are now catalogued forever on smartphone photos and videos, as well as on law enforcement body cam footage and the city’s surveillance cameras.

But, as spying on protesters—not just at 2020’s March on Washington, but at Black Lives Matter demonstrations across the country this summer—highlights how pervasive and ingrained the surveillance state has become, we should remember the anniversary of another important protest: that of a single whistleblower revealing what he felt was “the essential apparatus of a police state” in America.

In January and July of 1970, two articles appeared in the new publication Washington Monthly. They were written by Christopher Pyle, a former Army Intelligence captain, who alleged that the U.S. Army was spying on American citizens at protests and political gatherings.

In 1966, as the Vietnam War raged, Pyle, an ROTC member who was studying for a master’s degree in public law at Columbia University, was called up to serve. But instead of being sent to Vietnam, he was stationed at the Army Intelligence School in Baltimore, Maryland.

While there, he was assigned the task of teaching legal principles to counterintelligence agents; he also taught a class on how the military was expected to help control urban protests and riots. “Nobody really told me what to teach,” Pyle told The Progressive in a recent interview, “so I made it up.”

Pyle instructed his students how to move 10,000 troops quickly, and how they needed to find accurate maps and plan which local bridges could support the weight of army vehicles. He also taught them to write “spot reports,” six-paragraph incident reports on what they encountered during disturbances.

But one day, a student approached Pyle after class. “An officer came up to me and said, ‘Wow, you don’t know too much about this, do you?,’ ” Pyle recalled, “and I said, ‘No, what can you tell me?’ ”

The officer offered to give Pyle a tour. They went across the base, and the officer showed him what many Army intelligence officers were really doing at CONUS (Continental United States) Intelligence Section Operations IV.

“I was briefed,” Pyle says, “and discovered that the Army had quite an operation going, collecting information on virtually everybody active in ‘civil disturbances,’ as they called them.”

Later in the tour, Pyle noticed a stack of computer punch cards, which contained information on regular American citizens. These were individuals who, for the most part, had done nothing more subversive than attend presentations at colleges, meetings at churches, or any kind of civil gathering with more than twenty attendees.

Pyle was shocked by these reports. Immediately after leaving the building, he told his fellow instructor, “When I get out of the Army, I’m going to write an article about this.”

Four months later, in July 1968, Pyle concluded his Army service. He wrote his article and offered it to The New York Times, but it was declined. Undeterred, he submitted it to Washington Monthly. In January 1970, his article appeared under the headline, “CONUS Intelligence: The Army Watches Civilian Politics.”

Pyle’s exposé, which was syndicated in forty-one other newspapers across the country, brought him to the attention of North Carolina senator Sam J. Ervin, a staunch defender of individuals’ constitutional rights. Ervin, as the head of the influential Senate Judiciary Subcommittee on the Constitution, would eventually recommend that the Army cease reporting on such free-speech activities as writing letters to politicians, signing petitions, or attending peaceful meetings.

(Ervin was also a visionary who clearly understood the dangers of high-tech surveillance; he frequently raised the alarm about the dangers of computerization and the collection of massive amounts of information on citizens. In 1965, he had opposed a plan, backed by President Johnson’s administration, to create a “National Data Bank” and to feed it all the data—including personal medical records—held in separate federal databases. “The computer never forgets,” he warned.)

As important as it was to gain the attention of politicians, Pyle was more interested in the response from his fellow soldiers and those in Army intelligence who were actively spying on citizens’ activities.

“The articles were necessary to get the former agents in touch with me,” Pyle says. In talking with these agents, Pyle and another former Army member, Ralph Stein (who contacted Pyle after reading the first Washington Monthly piece), learned more about how widespread the Army’s intelligence-gathering apparatus in the U.S. was.

Eventually, Pyle and Stein interviewed 125 agents (many of them former students of Pyle’s at the Intelligence school) on their spying activities. The majority of them agreed to go on the record if they were promised confidentiality, or as Pyle put it, “They wanted to make sure early in these conversations that I was willing to go to jail rather than reveal their identities.”

Pyle knew only too well why his sources wanted to remain anonymous. Because he was regarded as a whistleblower, he became the object of bureaucratic retaliation. At the Pentagon, investigators were tasked with finding errors in Pyle’s reporting; after that failed they made allegations that he had fathered illegitimate children (“to which I replied, ‘I’d love to meet them, can you arrange that, please?’ ”).

Pyle’s name was also put on President Nixon’s “Enemies List,” which resulted in a punitive tax audit. Ultimately, the IRS found that he and his wife had overpaid by $154, an amount the government duly refunded. He was threatened with prosecution for espionage or treason, even though he had been careful to release no classified information, and he and Stein had carefully vetted all of their agent informants’ identities and stories.

During the 1970s, Pyle would go on to work as a consultant for various Senate subcommittees, and to work with the ACLU. He was also involved in the drafting of the Privacy Act of 1974, which made it illegal for the Army to collect any information on political meetings, gatherings, or protests.

In the following years, the civilians in charge of Army counterintelligence gave orders that all domestic surveillance of citizens’ political gatherings by Army operatives must cease. Pyle continued to investigate what the Army did with the paper records it had compiled on anti-war and civil rights activities, and learned that many of those records were destroyed.

“We put the U.S. Army Intelligence command out of business,” Pyle told me during our interview. “We forced them to burn the files, we forced them to promise they wouldn’t do it again, which isn’t worth much.”

Since the 1970s, in his work as a professor and writer, Pyle has taught generations of students to think about individuals’ rights, the rule of law, and American history. He recently retired from Mount Holyoke College in Massachusetts, and he is now working on a book about money and politics and the “ways in which the Internet can be used to manipulate people’s political opinions, and to destroy the whole concept of truth.”

In many ways, Pyle believes, “We’re in a much more dangerous situation than we were in 1970.”