I Can’t Forget the Lessons of Vietnam. Neither Should You. 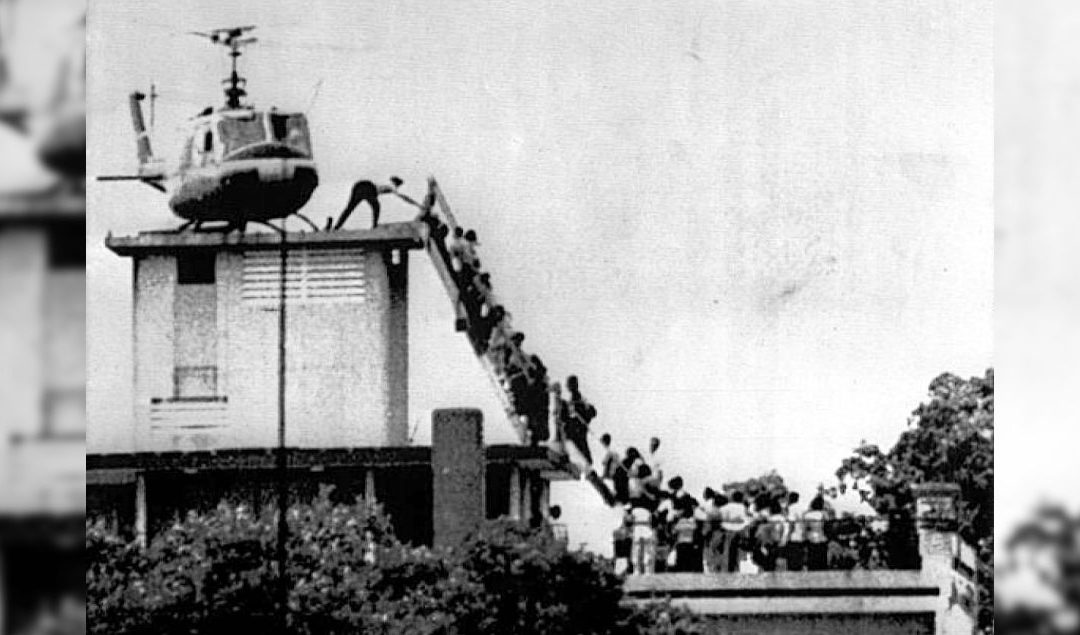 By Viet Thanh Nguyen at the New York Times

I was 4 years old when Saigon fell, so I do not remember any of it. I count myself lucky, since many Vietnamese who survived the end of that war were greatly traumatized by it. The collapse of the American-backed Southern regime began in my Central Highlands hometown, Ban Me Thuot, in March 1975. In less than two months, all of South Vietnam capitulated to the North Vietnamese. Soldiers fled in chaotic retreat among civilians. My mother, brother and I were among them. We left behind my adopted sister. After walking nearly 200 kilometers to escape the advancing North Vietnamese army, the three of us made it to the seaside city of Nha Trang, where we managed to find a boat to take us to Saigon where my father was.

We were lucky; many others weren’t. My brother remembers dead Southern paratroopers hanging from trees. In Nha Trang, some people fell to their deaths in the sea, trying to clamber onto boats. In Da Nang, desperate soldiers crammed into the luggage compartments of a plane, while the ones left behind threw grenades and fired at the plane.

Images of bodies falling, of people running desperately, are now with us again, from Afghanistan’s capital, Kabul. Comparisons to Vietnam began early in America’s misadventure in Afghanistan: It was classic mission creep, a quagmire, another forever war. The pessimism was warranted. Two decades, billions of dollars and tens of thousands of deaths later, Taliban forces are now in Kabul, having secured control of the country with dizzying speed. As much as some American leaders resist it, the analogy presents itself again, with the fall of Saigon and resulting catastrophe foreshadowing the possible fate of tens of thousands of Afghans. It is not something the Biden administration is interested in hearing. “This is not Saigon,” Secretary of State Antony Blinken said over the weekend.

True, the Taliban are not the People’s Army of Vietnam, and the American evacuation of Saigon, chaotic as it was, was better planned than the American endgame for Kabul. But the Saigon analogy is important because the urgency and the human disaster are similar as is the role that the United States and other nations must play to shape those fates of Afghans. It was therefore disappointing to hear President Biden on Monday defend his Afghanistan policy by focusing on two alternatives — stay and fight or withdraw — while laying the blame primarily at the feet of the Afghan government and army. Blaming Afghans obscures a history of American miscalculation starting with President George W. Bush, and allows Mr. Biden to treat the evacuation of Afghan allies as an afterthought rather than a priority.

For these civilians, the war hasn’t ended, and won’t end for many years. Their future — and Mr. Biden’s role in determining whether it’s one of resettlement and new beginnings or one of fear and misery — is what will determine whether America can still claim it will always stand by its allies.

As a scholar of memory and a novelist who has written about the Vietnam War, I have often thought of 1975 and its consequences. I grew up in a Vietnamese refugee community so deeply shaped by the fall of Saigon that the community calls that month Black April, which is commemorated every year. So when I read this account by an anonymous Afghan journalist in recently captured Taliban territory, it resonated completely with all the stories I have heard from Vietnamese refugees: “My whole life has been obliterated in just a few days. I am so scared and I don’t know what will happen to me. Will I ever go home? Will I see my parents again? Where will I go? The highway is blocked in both directions. How will I survive?”

Her questions are especially haunting as images of Afghans trying to escape for their lives, crowding Kabul’s airport, fill the airwaves. Her questions were probably similar to ones my parents and many other Vietnamese refugees asked of themselves.

Again, we were the lucky ones: My family tried to flee by air but could not make it to Saigon’s airport. We tried the U.S. Embassy and could not get past the enormous crowd. Finally, we found a barge at the dock, left Saigon and eventually made it to the United States, where we restarted our lives. We were civilians, but this was a war story.