I was there: One Woman’s Perspective on “The Trial of the Chicago 7” 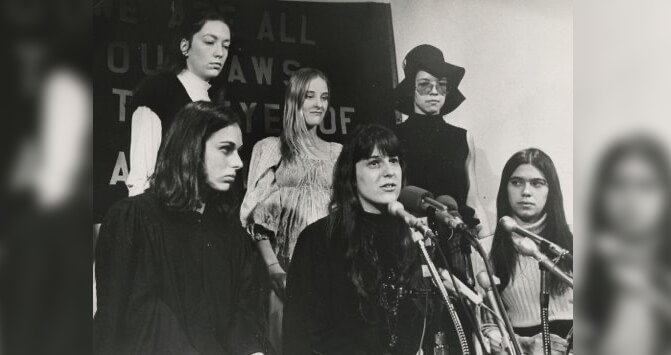 By Nancy Kurshan at CounterPunch

Aaron Sorkin’s The Trial of the Chicago 7, streaming on Netflix, is entertaining, sometimes moving and often funny. But it played fast and loose with the facts. I ought to know. I was a yippie organizer for the ’68 protest and present every day at the trial, working on the defense side— in the beginning with Tom Hayden, tracking down witnesses. As the nature of the trial morphed, I became the “yippie props gal”. I acquired the robes that Jerry Rubin and Abbie Hoffman wore to court in Sorkin’s movie.

Jerry and I had been living together for about 4 years. After the guilty verdict and contempt sentences the judge threw the defendants immediately into jail, and Anita Hoffman, Tasha Dellinger and I burned judges robes at a press conference underneath a huge banner — “We Are All Outlaws In the Eyes of America”— and helped organize a large protest. I spoke alongside attorney Bill Kunstler at Santa Barbara the day the citizens of that town burned down the Bank of America. So we were there, even if invisibly, as women often are.

Although the actors were great, Sorkin failed to reflect the essence of many of the characters. He showed Jerry as a violence-provoking buffoon, one who let a female FBI agent get close to him in the midst of what we had put our hearts and souls into for much of the year. The only woman that was next to him the whole time was me. And I knew Jerry’s faults as well as anyone which is finally why I left him. But I also knew his strengths. He had tremendous courage. Not Rambo courage. It was ridiculous to see him in the film talking about molotov cocktails. He couldn’t even make a smoothie. But he was brave. He stood up 3 times to the House Unamerican Activities Committee (HUAC). All times in costume. First as a revolutionary war hero with tri-corner hat and all, then as an international guerrilla, and finally as Santa Claus. (It was Xmas time, and the headlines read HUAC BARS SANTA.) Many times bravery involves being able to put yourself out there, even if you are scared, to be outspoken and fight for what you think is right. Jerry had been a journalist and knew how to work the media to expand the movement. He developed theatrical politics and was a creative, brilliant tactician of protest. He helped lead the earlier protests against the war. It was largely his vision, as the Project Director, that guided the 1967 attempt to SHUT DOWN the Pentagon through both levitation and huge civil disobedience action against the war where 800 of us were arrested.

Jerry also arrived at the trial after a secret, harrowing cross-country journey by car from California to Chicago in the custody of US Marshalls, and spent the beginning of the trial in Cook County Jail. He’d served short sentences for anti-war activities. But Cook County Jail was especially challenging. And here is where some of the essence of Bobby Seale comes in. I thought he was played strongly in the film, if one-dimensionally. It was Bobby who helped Jerry get through his time in Cook County Jail. Bobby, facing possible life in prison (or worse), helped the white guy who had invited him to come speak! I was grateful for his help.

The conflict that went on among the white defendants and supporters about how to respond to what was going on in the courtroom with Bobby Seale was essential to those of us at the center. Once the guards dragged Bobby out, should we have disrupted the courtroom? We would forever interrogate ourselves about why we didn’t act. Was it respect for the Panthers’ request that we allow Bobby to define his own situation and not get in his way? But Bobby was now gone, so was it the differences among the defendants that held us back? Or was it our fear and white privilege? Of course Bobby’s severance from the trial, further delegitimized the court, and served to catalyze all that followed.