John Kelly’s Ancestors Wouldn’t Have Fit In Either 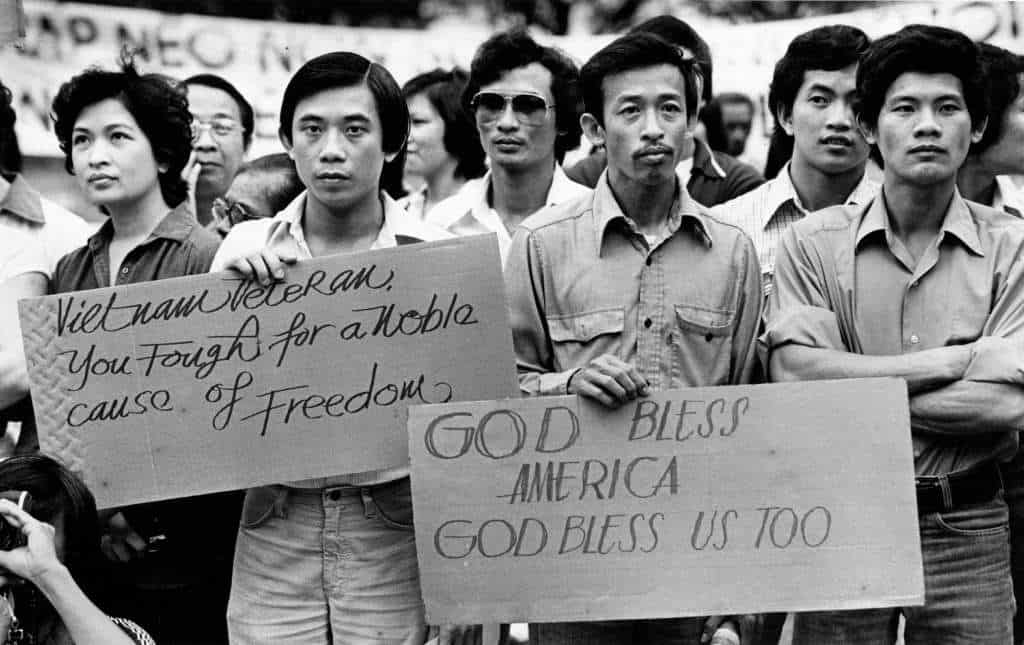 Photo: Vietnamese immigrants gather at Houston City Hall with signs for the ceremony of the sixth anniversary of the fall of South Vietnam, 1981. Courtesy of Larry Reese and the Houston Chronicle. Image available on the Internet and included in accordance with Title 17 U.S.C. Section 107.

This essay originally appeared in the Opinion section of the May 19, 2018 issue of The New York Times

I had forgotten that memory of my mother, sitting by herself, reading aloud from a church newsletter. It was the only way she could read, having had only a grade school education. As an American teenager fluent in English, I felt pity for her, and perhaps a bit of shame.

The memory came back to me on learning of the White House chief of staff John Kelly’s words about undocumented immigrants coming from south of the border, whom he described as people who would not “easily assimilate into the United States, into our modern society.”

“They’re overwhelmingly rural people. In the countries they come from, fourth-, fifth-, sixth-grade educations are kind of the norm. They don’t speak English,” Mr. Kelly said. “They don’t integrate well; they don’t have skills. They’re not bad people. They’re coming here for a reason. And I sympathize with the reason. But the laws are the laws.”

Mr. Kelly feels sympathy for these people, some of whom are like my mother, born into a rural background. But Mr. Kelly — like President Trump, who last week called certain undocumented immigrants “animals” — cannot empathize with them. His inability to see or feel the world as they do is shared by many Americans.

That includes some of my fellow Vietnamese-Americans, who, though they came to this country as refugees fleeing war, are saying that the United States should not take in any more refugees, especially those from places like Syria. Some, like the Vietnamese-American mayor of Westminster, Calif., home to the largest population of Vietnamese outside of Vietnam, even say the United States should not accept any undocumented immigrants, since they include “criminals.”

We were the good refugees, the reasoning goes. These new ones are the bad refugees.

Having grown up in the Vietnamese refugee community in San Jose, Calif., in the 1970s and 1980s, I can testify that there were plenty of bad refugees among us. Welfare cheating. Insurance scams. Cash under the table. Gang violence, with home invasions being a Vietnamese specialty.

All that has been forgotten. Vietnamese-Americans are now part of the “model minority” who believe they earned their success, relying on little or no government assistance. They are not so different from Mr. Kelly, the descendant of Irish and Italian immigrants who included unskilled laborers speaking little English. Convenient amnesia about one’s origins is an all-American trait, since we believe ourselves to be the country in which everyone gets a new beginning.

What some of us also forget is that at nearly every stage of our country’s history, the people who were already established as American citizens found convenient targets to designate as unable to assimilate: the indigenous peoples; conquered Mexicans; slaves; or the newest immigrants, who were usually classified as nonwhite.

In 1751, even before the country was founded, Benjamin Franklin wrote that “perhaps I am partial to the complexion of my country, for such kind of partiality is natural to mankind.” He favored “the English” and “white people,” and did not want Pennsylvania to become a “colony of aliens,” who “will never adopt our language or customs, any more than they can acquire our complexion.” He was speaking of the Germans.

German-Americans are now “white,” which is partly a color, partly a state of mind and partly a matter of perception. The eventual whiteness of German-Americans saved them from being thrown en masse into internment camps during World War II, unlike Japanese-Americans. With historical lessons like that, it’s no surprise that some Vietnamese-Americans desire to put their refugee past behind them, including the memory of how only 36 percent of Americans wanted to accept Vietnamese refugees in 1975.

A choice, then, exists for every immigrant and refugee, and their descendants. Mr. Kelly and some Vietnamese-Americans have chosen to forget their past or to recast it with themselves and their families as heroic, self-reliant Americans who are better than the newest and most threatening immigrant or refugee. By forgetting the past, these Americans repeat what has been there since our country’s beginning — the perpetually renewing fear of someone darker, someone different.

I prefer to remember my mother’s heroism and how it began before she ever became an American citizen and changed her name to Linda. She was born Bay, or Seven, at a time when Vietnamese people sometimes had so many children that it was easier to give them numbers instead of names. Along with my father, who had a high school education, she lifted herself from rural poverty and became a successful businesswoman by taking significant risks, the first one being when they left North Vietnam for South Vietnam in 1954. They lost nearly everything when they took the biggest risk of all and fled as refugees to the United States in 1975.

By the time I observed her reading aloud to herself, a dozen years after her American beginning, my mother was once again a successful businesswoman. She had already been shot once at her store, which I did not witness, and had a thief point a gun in her face in her own home, which I did witness.

She did not speak fluent English, but she did well enough to contribute more in taxes than many Americans. She was and is heroic, but many Americans would see her only as an outsider, including the one who put a sign in a shop window near my parents’ grocery store in San Jose: “Another American driven out of business by the Vietnamese.”

Because of what she made possible by giving me an education and a home, I could have become a forgetful American, eager to be accepted by other Americans, ready to show my Americanness by keeping people like my parents out of the country. But I felt myself to be one of those Vietnamese-Americans — and there are many of us — who never wanted to forget that we should stand with immigrants and refugees, with the poor and the unwanted, with people very much like my mother.

My mother needed neither my pity nor my shame. Just my compassion and respect.

Viet Thanh Nguyen, a contributing opinion writer, is the author, most recently, of The Refugees, and the editor of The Displaced: Refugee Writers on Refugee Lives.