‘I Just Wanted to Be Free’: The Radical Reverberations of Muhammad Ali 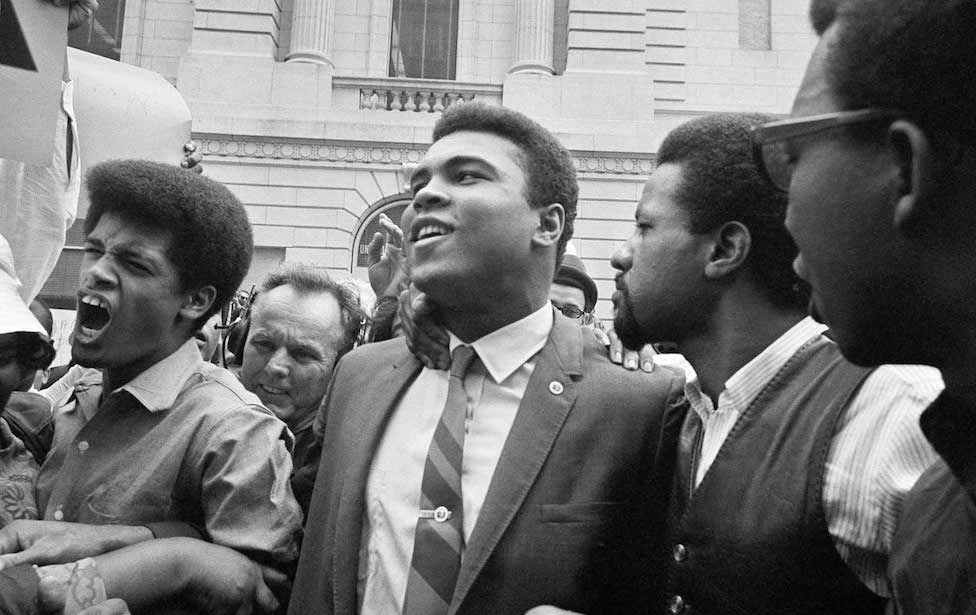 This article originally appeared at TheNation.com

Ali was shaped by his times. But his death should remind us that he also shaped them.

When Dr. Martin Luther King came out against the war in Vietnam in 1967, he was criticized by the mainstream press and his own advisors who told him to not focus on “foreign” policy. But Dr. King forged ahead and to justify his new stand, said publicly, “Like Muhammad Ali puts it, we are all—black and brown and poor—victims of the same system of oppression.”

When Nelson Mandela was imprisoned on Robben Island, he said that Muhammad Ali gave him hope that the walls would some day come tumbling down.

When John Carlos and Tommie Smith raised their fists on the medal stand in Mexico City, one of their demands was to “Restore Muhammad Ali’s title.” They called Ali “the warrior-saint of the Black Athlete’s Revolt.”

When Student Non-Violent Coordinating Committee (SNCC) volunteers in Lowndes County, Alabama launched an independent political party in 1965, their new group was the first to use the symbol of a black panther. Beneath the jungle cat’s black silhouette was a slogan straight from the champ: “WE Are the Greatest.”

When Billie Jean King was aiming to win equal rights for women in sports, Muhammad Ali would say to her, “Billie Jean King! YOU ARE THE QUEEN!” She said that this made her feel brave in her own skin.

The question is why? Why was he able to create this kind of radical ripple? The short answer is that he stood up to the United States government… and emerged victorious. But it’s also more complicated that that.

What Muhammad Ali did—in a culture that worships sports and violence as well as a culture that idolizes black athletes while criminalizing black skin—was redefine what it meant to be tough and collectivize the very idea of courage. Through the Champ’s words on the streets and deeds in the ring, bravery was not only standing up to Sonny Liston. It was speaking truth to power, no matter the cost. He was a boxer whose very presence and persona taught a simple and dangerous lesson: “real men” fight for peace and “real women” raise their voices and join the fray. Or as Bryant Gumbel said years ago, “Muhammad Ali refused to be afraid. And being that way, he gave other people courage.”

My favorite Ali line is not him saying, “I hospitalized a rock. I beat up a brick. I’m so bad I make medicine sick” or anything of the sort. It was when he was suspended from boxing for refusing to be drafted into the Vietnam War. Ali was attending a rally for fair housing in his hometown of Louisville when he said:

Why should they ask me to put on a uniform and go 10,000 miles from home and drop bombs and bullets on Brown people in Vietnam while so-called Negro people in Louisville are treated like dogs and denied simple human rights? No I’m not going 10,000 miles from home to help murder and burn another poor nation simply to continue the domination of white slave masters of the darker people the world over. This is the day when such evils must come to an end. I have been warned that to take such a stand would cost me millions of dollars. But I have said it once and I will say it again. The real enemy of my people is here. I will not disgrace my religion, my people or myself by becoming a tool to enslave those who are fighting for their own justice, freedom and equality…. If I thought the war was going to bring freedom and equality to 22 million of my people they wouldn’t have to draft me, I’d join tomorrow. I have nothing to lose by standing up for my beliefs. So I’ll go to jail, so what? We’ve been in jail for 400 years.

Damn. This is not only an assertion of black power, but a statement of international solidarity: of oppressed people coming together in an act of global resistance. It was a statement that connected wars abroad with attacks on the black, brown and poor at home, and it was said from the most hyper exalted platform our society offered at the time: the platform of being the Champ. These views did not only earn him the hatred of the mainstream press and the right wing of this country. It also made him a target of liberals in the media as well as the mainstream civil rights movement, who did not like Ali for his membership in the Nation of Islam and opposition to what was President Lyndon Johnson’s war.

But for an emerging movement that was demanding an end to racism by any means necessary and a very young, emerging anti-war struggle, he was a transformative figure. In the mid-1960s, the anti-war and anti-racist movements were on parallel tracks. Then you had the heavyweight champ with one foot in each. Or as poet Sonia Sanchez put it with aching beauty, “It’s hard now to relay the emotion of that time. This was still a time when hardly any well-known people were resisting the draft. It was a war that was disproportionately killing young Black brothers and here was this beautiful, funny poetical young man standing up and saying no! Imagine it for a moment! The heavyweight champion, a magical man, taking his fight out of the ring and into the arena of politics and standing firm. The message was sent.” We are still attempting to hear the full message that Muhammad Ali was attempting to relay: a message about the need to fight for peace.

Full articles can and should be written about his complexities: his fallout with Malcolm X, his depoliticization in the 1970s, the ways that warmongers attempted to use him like a prop as he suffered in failing health. But the most important part of his legacy is that time in the 1960s when he refused to be afraid. As he said years later, “Some people thought I was a hero. Some people said that what I did was wrong. But everything I did was according to my conscience. I wasn’t trying to be a leader. I just wanted to be free.” Not the fight, the reverberations. They are still being felt by a new generation of people. They ensure that the Champ’s name will outlive us all.

Bill Russell said it best in 1967. “I’m not worried about Muhammad Ali. I’m worried about the rest of us.” That is more true than ever.