Ken Burns Just Ripped Me Off! 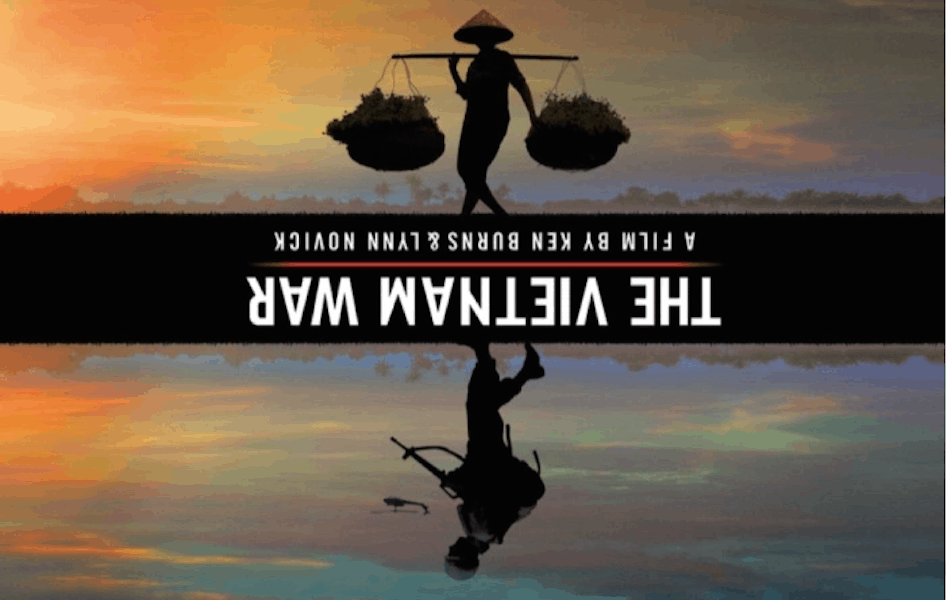 This article originally appeared at TheContraryPerspective.com.

On Wednesday, September 6, I drove round trip to Boston, MA to attend a Preview for the Ken Burns’ gargantuan TV series on the Vietnam War, debuting September 17 on PBS affiliates. The event was held in an 1100-seat auditorium and, frankly, I didn’t expect it would be a full house. To my amazement, the place was bursting at the seams.  I imagine most attendees were there to worship “America’s Storyteller.” Peter Lynch, the former Fidelity Investments “guru,” who has his own non-profit foundation now, was sitting about eight feet from me.

Here is how things actually unfolded: It was at least 7:10pm before the recorded announcement about emergency exits and turning off cellphones was heard.

Finally out came the President of WGBH TV/Radio (this is one of the major public broadcasting operations in the nation). He thanked the corporate underwriters, Bank of America most prominently, and heaped praise on Ken Burns. Next came a senior executive from Bank of America to say how thrilled they are to be a long-time financial supporter of the Burns-Novick (Lynn Novick, Burns’ sidekick) documentary machine.

Eventually, the magic little fellow himself trotted out to the podium to introduce the actual video. It was clear from these remarks that Burns actually believes there once was a legitimate, sovereign entity called “South Vietnam.”

Then, as the clock ticked away, the Preview itself was screened.

By the time the Preview concluded, the clock on the wall read about 8:30pm. Time to squeeze in a few questions from the audience, perhaps? Wrong!!

Instead, Dr. Harris, a Boston educator and combat Marine in the war who’s featured in the series, was introduced. This African-American gentleman told how, having landed at Logan Airport in Boston, returning from the war in uniform, he was snubbed by multiple taxi drivers. That was real, as we say, and he comes off in the film as very real, speaking of becoming accustomed to killing: “We’re Marines and it’s war. It’s what we do.”

Okay, well and good. Now may the audience ask some questions of Burns and Novick (Ms. Novick has joined Burns on stage by now), please? No!! Two radio journalists from WGBH are now trotted out and they put questions, between bouts of additional adulation-heaping on Mr. Burns. The latter reiterates that his objective in his work is to “tell a good story.” Note that this is not the same as boiling matters down to essential truths. “There is no single truth in war” is the promotional tag-line for this series. And suddenly, as if by magic, it’s 9pm and the evening is over. Not one single question taken from the audience!

By this time several members of the Boston Chapter of Veterans For Peace and I had positioned ourselves at the exits to distribute a 28-page document explaining the VFP Full Disclosure Campaign that was launched to try to counter the Pentagon’s 13-year effort (2012-2025, at taxpayer expense) to whitewash this most shameful and criminal episode in our history. I handed a copy to Peter Lynch, calling him by name to get his attention. (His facial features and “shock” of pure white hair are unmistakable.) When there was but one copy of our handout remaining, I went back inside the auditorium on the slim chance I might be able to hand it directly to Mr. Burns, in an attempt to educate him. But Ken had already vanished. I shook Dr. Harris’s hand, thanked him for being real, and left the handout with him. I explained why I felt I was entitled to a refund, and he took it well (obviously he wasn’t to blame for the misrepresentation of what was to transpire that evening). I suggested he might pass the handout on to Mr. Burns when he’s done with it.

You must understand that for over a week, leading up to this event, I was unable to sleep soundly because I was fretting over how compactly, how concisely, I could phrase a question for the panel… assuming I could even get to the microphone. And admittedly, from a practical standpoint, audience Q&A would have been a madhouse. Nevertheless, I paid $16.28 for admission to this Preview in hope of getting to speak. To say nothing of $21 for parking, tolls and gasoline and three hours round-trip driving.

And what was I going to say?  Up to the time of Burns’s introduction of the video, I was going to say: “For me and like-minded veterans, there is one overarching fundamental truth: this war was utterly unjustified.” But I decided I would say instead: “Mr. Burns, I am mortified that you are perpetuating the myth of ‘South’ Vietnam, a puppet state only created when the USA manoeuvred to cancel the 1956 election, which would have seated Ho Chi Minh as president of a unified nation.”

Without a doubt, this series has assembled never-before-seen material, including interviews in Vietnam with combat veterans from “the other side.”  However, my personal decision now is to not invest any of my time watching it. And I shall always remember Burns and Novick as “The folks who required 18 hours to offer no answers!”

And furthermore, Mr. Burns, I want my money back!!

Gregory Laxer was a Vietnam era US soldier who refused to deploy to Vietnam because he viewed it as an illegal intervention by the US.