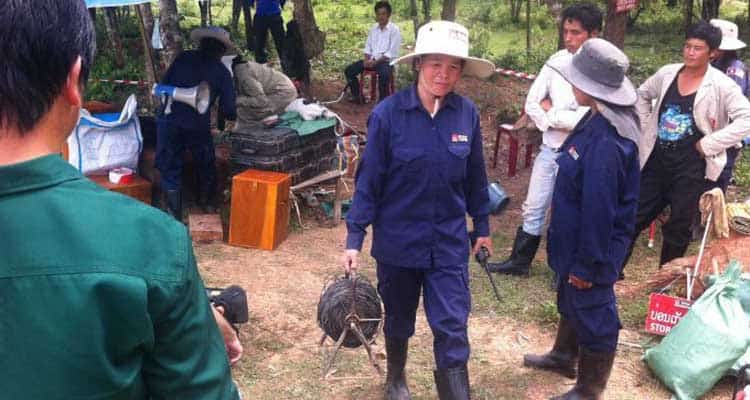 Women are on the frontline of the effort to find and destroy millions of unexploded cluster bombs which are still claiming lives decades after being dropped on Laos.

The US dropped up to 260 million cluster bombs on Laos during the Vietnam War – the equivalent of one bombing mission every eight minutes, for nine years.

It left Laos as the most heavily bombed country, per capita, in the world.

Up to 30 per cent of the munitions failed to explode on impact, leaving thousands of hectares of land contaminated with bombs that can explode at any time.

Decades later, people who were not even born when the war ended are being killed by the bombs.

Now, peace activists are urging the US to provide more money to pay for the bomb clearance effort.

Women make up 40 per cent of the clearance teams operated by the Mines Advisory Group (MAG) in Xieng Khouang province, which borders Vietnam.

The cluster bomblets, nicknamed “bombies” by the locals, are only the size of a tennis ball, but they are deadly.

After four decades of rain and dust, they are very difficult to see in the soil.

Phou Vong, 46, is a member of one of the MAG female de-mining teams. She will never forget the first time she found a cluster bomblet.

“I was excited as well as frightened. I hesitated a bit but I thought I should be glad to see it, because in a sense I was helping my people,” Ms Vong said.

“If we want to clear these bombs, I would like them to continue to support more than what they have been [doing] so far. This is not enough because there are really a lot of bombs,” she said.

“Forty years later, people are still being killed and maimed,” she said.

“Children that were born two generations after the war are still being harmed. This is a continuing tragedy.”

The US has increased its annual funding for bomb clearance and victim assistance to $12 million, but Ms Khamvongsa says more help is needed.

“Since the mid ’90s, the US has been providing – up until recently – on average around $2 million per year, which is really not a lot of money considering the scale of the problem,” she said.

“We are providing people an opportunity to do the right thing.

“And when there is so much wrong in the world today, who doesn’t want to do the right thing and do something that is solvable, something that we can work towards addressing and we can eventually solve? This is so solvable.”

Photo: The bomblets, or “bombies” are only about the size of a tennis ball, and very hard to see in the foliage. (ABC News: Sally Sara)

It is estimated more than 20,000 people have been killed or injured by cluster bombs since the war ended.

Farmer Tier Keomanyseng, 33, lost both his hands and eyes when a cluster bomb exploded while he was working in the fields in 2012. He was knocked unconscious by the force of the blast.

“I knew nothing. I didn’t remember anything at all. I didn’t feel anything,” he said.

Mr Keomanyseng is now profoundly disabled and unable to provide for his family.

In the weeks after the accident, he wanted to end his life. Now, he is trying to accept his new life.

“I feel that I have more hope now. My heart says I want to help my wife but, I just can’t do it. I am still concerned about my wife and my children,” he said.

It is unclear how long it will take to find and destroy all of the unexploded ordnance in Laos.

Ms Khamvongsa says the people of Laos are determined to clear the millions of bombies and rebuild their country.

“What’s really remarkable about the people of Laos, and what gives me so much hope, is their own sense of optimism, and endurance and spirit,” she said.

“And perseverance to be able to survive such devastating history and past and to overcome it with such an amazing sense of spirit, of good-hearted spirit.”