Last Plane Out of Saigon: A Review by John Heuer 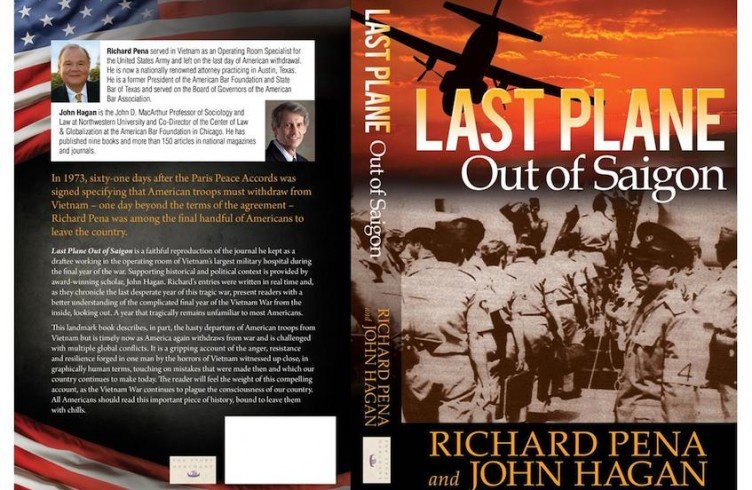 Last Plane Out of Saigon

By Richard Pena and John Hagan

On May 25, 2012, in announcing a 13-year long commemoration of the war in Viet Nam funded by Congress at $65 million, President Obama proclaimed: “As we observe the 50th anniversary of the Vietnam War, we reflect with solemn reverence upon the valor of a generation that served with honor. We pay tribute to the more than 3 million servicemen and women who left their families to serve bravely, a world away… They pushed through jungles and rice paddies, heat and monsoon, fighting heroically to protect the ideals we hold dear as Americans. Through more than a decade of combat, over air, land, and sea, these proud Americans upheld the highest traditions of our Armed Forces.”

As a response to the official commemoration, Veterans For Peace has launched a campaign toward an honest commemoration of the American war in Vietnam that honors the anti-war perspective. This campaign can be followed at www.vietnamfulldisclosure.org, and welcomes the new book Last Plane Out of Saigon, by Richard Pena and John Hagan.

Richard Pena, a 1970 University of Texas graduate, was one of legions of students radicalized by the Vietnam War, the murders at Kent State by Ohio National Guardsmen, and the disclosure of President Nixon’s secret Cambodia bombing. Yet, when Pena was drafted out of Law School a year later, he allowed himself to be inducted into the US Army and served an eleven month tour as an operating room technician in Vietnam. During his tour as an OR tech, Pena kept a journal which found its way into a shoe box in his attic for 3 decades.

Pena returned to law school after his Army service, and in 2003 led an international tour of lawyers on a visit to Vietnam. It was there in Ho Chi Minh City (formerly Saigon) that the delegation made a visit to the War Remnants Museum and Pena saw a photograph of himself and others boarding a plane for home. The photo was titled “Last Plane Out.” Pena was indeed among the very last military forces to evacuate Vietnam. The Paris Peace Accords, signed on January 23, 1973, specified that all remaining US military forces in Vietnam would leave within 60 days. Pena’s number was actually X + 61. The last 2 planes departed Saigon 61 days after the Paris agreement was signed.

Among those departing with Pena were another OR tech and a nurse, the last medical personnel attached to US military forces that, at their peak, numbered over half a million men and women. It was a humiliating defeat for US policy makers who kept fabricating ‘lights at the end of the tunnel,’ predicting eventual victory in Vietnam. 58,286 service men and women perished, 350,000 wounded, and an estimated 3 million Vietnamese died.

When Pena returned from his 2003 visit to Vietnam, his friend, Northwestern University Professor of Sociology and Law, John Hagan, persuaded him to dust off his wartime journal for the purpose of writing this book. Pena’s Vietnam journal forms the core of the book, while Hagan’s comprehensive historical narratives provide background and context in a rich tapestry of perspective and real-time Vietnam experiences.

In the fall of 1972, a planned going away party for OR techs ready to fly back home aboard the “Freedom Bird” is cancelled after news that a C 130 military transport plane has crashed, with just 4 badly wounded survivors out of 45 passengers. The burn patients are especially troubling, difficult to treat or to provide any relief for excruciating pain. Pena paraphrases Dylan’s “Blowing in the Wind:” “I never cease to wonder how a president can play God and politics with the lives of people. How many dead will it take for them to see?”

These Americans in exile [Vietnam] can’t help questioning the wisdom of a structure which commits itself to such a ridiculous folly. The absurdity of this action is now apparent to the politicians and to the military. However, the absurdity in human terms can only be real to those who have been exiled here. It will take much more than merely bringing the troops home to bring sanity to our world. It will take more than a token change in American priorities. But there are those, the ones who were exiled, who have seen the madness in these types of decisions and who will never again complacently accept them.

And during a quiet moment Pena writes:

There’s a lot of time to read; to think; to theorize; to discuss priorities, foreign policy, and values; and to recognize the tragedy involved with Vietnam. Yet, to speak out about the tragedy is said to be anti-American. Despite all the Vietnam participants have endured in this forsaken country, many self-acclaimed “true Americans” call us disloyal because we speak of mistakes, of failure—because we speak the truth as we experienced it. I submit that the true American patriots are those who see the faults of our country and do not hide from them but instead attempt to rectify them.

Those Americans who have been to Vietnam will speak to you of bureaucratic decay, of destruction, of horror, of misplaced priorities, of necessities. Listen to them, for they are painfully aware of the consequences of another involvement such as this. Of all the mistakes we have made in Vietnam, the gravest would be our failure to learn from these mistakes. There must never be another Vietnam.

We can only wonder what a different course history might have taken if George W. Bush and Dick Cheney had not dodged their opportunity to walk the walk of their vocal support for the war in Vietnam. Perhaps they would not have been so eager to send sons and daughters of other citizens to kill and be killed in Afghanistan and Iraq.

In addition to his passionate truth-telling, the most admirable qualities of Richard Pena’s service were his role as a non-combatant healer, and his determination to be the last man out; to “turn off the lights” of US military engagement in Vietnam.   There were others willing to trade an earlier ‘out’ for Richard’s X + 61 ticket. It required extraordinary courage to be willing to be on the last plane out. Casualties among the remaining US forces escalated dramatically after the January 23rd peace accord was signed.

Reading Last Plane Out of Saigon brought a flood of memories to this reviewer. Like Richard Pena, I protested the war in Vietnam while a college student, and worked in a hospital burn ward. Like Mr. Pena, I served in a non-combat role, in my case as a Coast Guard registered merchant seaman in Vietnam. Unlike Mr. Pena, I refused my 1970 order to report for induction into the US Army. Having served ‘in country’ in 1968, I was determined not to take up arms against the people of Vietnam, whom I consider my brothers and sisters.

The one troubling assertion Pena makes is the requirement to   distinguish between necessary and unnecessary wars. Author David Swanson argues persuasively in “War Is a Lie,” that all wars are utterly unnecessary. WW II is cited by many as the last “good” war, but even Winston Churchill argued that WW II was perhaps the most avoidable war in history. The 1928 Kellogg-Briand Peace Pact outlawed all war, and the 1945 formation of the United Nations, “To save future generations from the scourge of war,” should be ample evidence to establish the fact that the future will not present necessary wars. Swanson also argues that we will not survive the looming climate crisis if we are engaged in the environmental devastation of war and war preparations.

A growing body of scholarly evidence demonstrates that “at the very moment the number one nation has perfected the science of killing, it has become an impractical instrument of political domination.”  In fact, the last century has seen many more effective nonviolent actions to curb oppression than violent ones. And the dismal record of US militarism fanning the fires of terror and chaos in this young century should render our attitude toward military supremacy “quaint,” to quote US Attorney General Alberto Gonzalez’ dismissal of Geneva Conventions that outlawed torture.

Our 2014 Veterans For Peace convention was held in Asheville, NC. Our commemorative shirt sported this quote attributed variously to Bertrand Russell, John F. Kennedy and others: “Either man will abolish war or war will abolish man.”